Egypt thwarts 24 cases of antiquities theft in one week 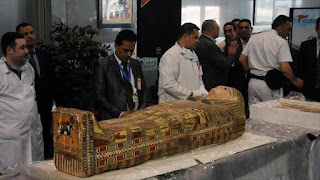 The Egyptian authorities have thwarted 24 separate cases of attempted antiquities theft within the last week alone, according to a local security source.

In the period from March 7 to 12, Egyptian tourism and antiquities police carried out raids targeting suspected antiquities thieves in ten different provinces, the source told Anadolu Agency on condition of anonymity due to restrictions on speaking to media.

“Those detained have since been referred to prosecutors for questioning,” the source said.

According to unofficial estimates, the illegal antiquities trade in Egypt is worth $20 billion annually.

Anadolu Agency website contains only a portion of the news stories offered to subscribers in the AA News Broadcasting System (HAS), and in summarized form. Please contact us for subscription options.