We are fortunate this season to have with us two talented trainees from the Ministry of State of Antiquities to help us work on the pottery from the site, Aisha Mohamed Montaser and Hussein Fawzi Zaki.  Aisha has trained in ceramic analysis at the American Research Center in Egypt’s Field School at Giza; Hussein is  Chief Inspector in the Valley of the Kings and is interested in the ceramics from the royal tombs of the New Kingdom. 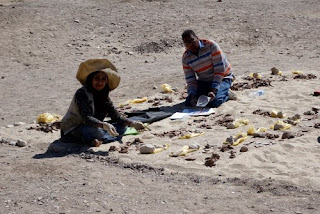 Aisha and Hussein at work

Together, Aisha and Hussein have been helping us sort and record the pottery from both the King’s Palace and the West Settlement. One of their tasks has been to help develop a corpus of the ceramics found at the site to compare with that known from Tell el-Amarna. An exhaustive compendium of the pottery from that site has been published by Pamela J. Rose, and this will serve as a useful comparison to the material from Malqata.  It will not only be important to compare the Malqata ceramics with the Amarna corpus but also to analyze the similarities and differences among the various components of the site, such as the King’s Palace, the North Village, and the West Settlement, to see what they tell us about usage and function. 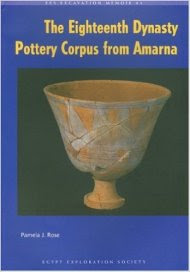 The cover of Pamela Rose’s Pottery Corpus from Amarna

In the King’s Palace, we have laid out what is known as a ‘sherd yard,’ which is a common feature of many archaeological sites. We have gathered diagnostic fragments, usually pieces of necks and rims, that can tell us what type of vessel the sherds originally came from. We chose an empty area in the palace to lay out the sherd yard and collected sherds from one of the ancient trash pits that the original Metropolitan expedition found chock full of pottery over a century ago. 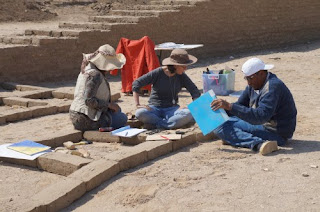 We then sorted the pottery into rough categories based on shape and ware- the type of clay used to make the vessel. These broadly correspond to the classifications developed for the Amarna corpus. Aisha and Hussein began making technical drawings of the examples that show how both the interior and exterior of the vessel would have appeared.  This along with detailed descriptions of each piece will help us create a corpus for the site. 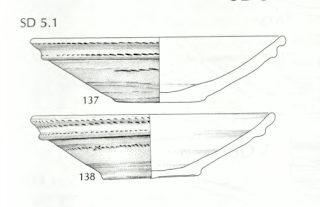 In the West Settlement, we had a different sort of Sherd Yard – in this case a very large rectangle full of clean sand that we used to begin the process of laying out and sorting the sherds that we have collected so far. We were very fortunate to have Pam Rose herself come to Malqata for several days to work with us. She spent time with Aisha and Hussein in the King’s Palace, organizing the corpus there and supervising some of the drawing. She then came over the West Settlement, where she gave me some very useful hands-on training in ware identification, and helped us refine our collection forms. 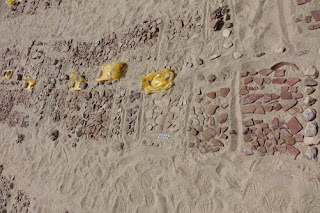 Overview of part of the West Settlement sherd yard

Aisha, Hussein, and I spent the last few days of the season, while my excavation team was backfilling the site with clean sand, sorting some of the pottery from 2016. We made a great deal of progress, and are looking forward to continuing the process of analyzing this material and building our corpus next year.