Museum of Fine Arts jewelry exhibit is a real gem 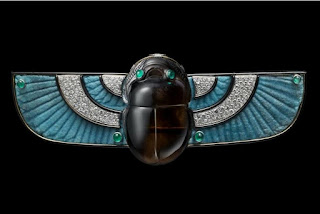 
Museum of Fine Arts jewelry exhibit is a real gem

"Past is Present: Revival Jewelry," which runs through August 19, reflects the richness of the museum's 20,000-piece collection, since only 17 of the 80 ornaments are loans.

For such a small exhibit, "Past is Present: Revival Jewelry" packs an opulent punch. In 16 display cases in a single gallery at the Museum of Fine Arts, 80 pieces – one 2,400 years old – command attention with their beauty, artistry and significance.

"Each case has its own story to tell," said exhibit curator Emily Stoeher. "I wanted to show off our world class 19th century collection and to show how it followed traditions."

Just outside the gallery, an eye-catching display of two turquoise scarabs (sacred beetles) sets the tone for the exhibit. A 740-660 BC Egyptian glazed ceramic scarab and a 1924 Cartier brooch/belt buckle scarab, of glazed ceramic, diamonds, platinum and gold, show how a modern designer copied and interpreted past designs and motifs.

The other styles of revival jewelry on view are: archaeological, Renaissance, and Classical. Each style is highlighted by an example in the floor display, which serves as a guide to the wall units that group jewelry by theme. What becomes clear are the ways the jewelry didn't just enhance beauty, but signaled wealth and power, national identity, protection from illness, and even opposition to slavery.

"Past is Present: Revival Jewelry," which runs through August 19, reflects the richness of the museum's 20,000-piece collection since only 17 of the 80 ornaments are loans. It is the third exhibit in the museum's jewelry gallery, which opened in 2011.

As she led a visitor through the exhibit, Stoeher stopped before a case labeled Confronted Animals, where three bracelets featured two identical animals symmetrically facing each other. They are an Anatolian (near Eastern) gold bracelet with lion heads from 2,400 B.C.; a 19th century Indian bracelet with makaras (mythical beasts) with ruby tongues darting out from white teeth; and a 1929 Cartier diamond chimera (a fire-breathing monster) with saphires, emeralds and rock crystal.

"This is one of those cases I was really excited to put together," Stoeher said. "To show that (the confronting heads) style has lasted 4,000 years is amazing, and I love that I can show where the idea of the Cartier design originated. He was looking at both the ancient lions and the Indian bracelets, and it's the first time they've been brought together in an exhibit."

Similarly, the Eyes display case brings together a 743-712 BC glazed ceramic Nubian Eye of Horus – a chest amulet believed to have protective properties – and a Cartier bracelet created for Cole Porter's wife, Linda Porter. Made of gold, platinum, diamonds, lapis lazuli and onyx, it has an eye embedded in a turquoise bead.

Of the numerous techniques the exhibit highlights, Stoeher especially admires granulation developed by the Etruscans, who fused tiny balls of pure gold. A brooch and gold earrings where tiny cherubs ride doves are examples of the archaeological style of revival, made by the 19th century Italian designer Alessandro Castellani.

"They're one of my favorite pieces in the collection because detail and craftsmanship are extraordinary and they're amazingly beautiful," she said.