The Faiyum in Peril: news of a renewed threat to Egypt's most ancient past from the Egyptian Cultural Heritage Organization (ECHO)


The Faiyum in Peril: news of a renewed threat to Egypt's most ancient past from the Egyptian Cultural Heritage Organization (ECHO)

Read on...
News has just reached ECHO of a major disaster that is about to befall the pristine archaeological area of the northern shore of the Faiyum. A modern highway has already been built running through the area where Gertrude Caton-Thompson discovered the famous Neolithic sites of Kom K and Kom W and the Middle Kingdom temple as Qasr el-Sagha. Indeed, the K-pits have already been destroyed by modern land 'reclamation'. Plans are now under way to instigate large-scale land 'reclamation', or rather than reclaiming this land turning it into fields and ruining the beautiful natural and cultural landscape. This area is supposed to be protected from development, being a National Park.

Although there was a rescue project, led by Khaled Said in 2006, there are still many areas that need to be surveyed. This proposed project must either be delayed long enough for rescue work to be undertaken, or better still abandoned, for it will not only destroy large swaths of archaeology, but as it is on a migration route of many birds, could seriously damage the whole ecosystem.

ECHO's report on the dangers to the Faiyum in 2008 still holds as true today as it was back then. Download the .pdf here: goo.gl/2bWlYN. The dangers of quarrying and land grabbing are even more pertinent today. An earlier threat of massive commercial development of this precious, ecologically sensitive region by a Mubarak crony was forestalled by the 2011 revolution. Read the 2011 article in Daily Sabah here: goo.gl/ZkhHyA. The threat of commercial development is ever present, grotesque as it may seem to anybody who knows the region.

If the Faiyum is lost to development, Egypt's most ancient past - and the natural world it supports - will be gone for ever. But who cares? And that's a serious question... 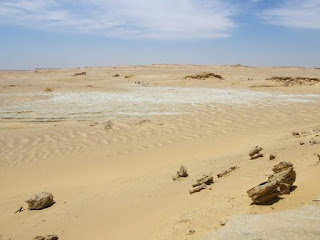