Nubians of Egypt and Sudan seek recognition and return


Nubians have been sidelined by the state in Egypt and Sudan, they face a struggle to return to the lands of their people after decades of being ignored. 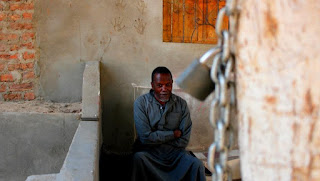 Nubians of Egypt and Sudan seek recognition and return

My Irish flatmates have a hard time believing my memories of celebrating Thanksgiving in a United States elementary school.

In my first grade classroom (November 1996) my teacher divided us into two groups of six-year-olds: One set of miniature pilgrims, the other "small Indians" (these were called "Native Americans" by the time my younger sister was in first grade, a decade later.) Parent volunteers help the pilgrim kids make paper buckles for their shoes; the "Indian team" cut and pasted together feathered headdresses.

It is at this point in the story that my Dublin flatmates' disbelieving smirks shift into horrified gaping mouths.

I'm a few decades out of elementary school now, but the realities of violence inflicted on Native American peoples is still largely absent from my country's collective memory, not to mention our history books.

Earlier this month in Egypt I met with Nubian human rights defenders who say their country's text books are equally flawed. The Nubian people are a minority in Egypt, but have lived in what is now Sudan and southern Egypt for more than 4,000 years.

As with indigenous peoples all over the world, their community was bisected by borders and forced off their native land by capitalist 'development' projects. In the early 1900s, Egypt began construction on a set of massive dams near Aswan city, turning the Nile river into a source of income for the Egyptian state.

By 1970, more than 50,000 Nubians had been forcibly relocated away from the river the Nile River, the body of water on which they had built a 4,000-year-old civilization.

Some were moved into 'temporary' housing miles from the Nile. Decades later, their descendants are still waiting for the return they were promised.

Others fled to Alexandria, Cairo, Luxor, and other major cities across Egypt looking for work.

Census data in Egypt is dicey at best - disjointed by revolutions, plagued by corruption-induced inefficiency, and for years neglecting to include data about the Nubians at all - but activists estimate that millions of ethnic Nubians are now scattered across the country, usually working more manual, lesser paid jobs.

Since forcibly displacing them from their homeland, the government has worked hard to relegate the remaining Nubian community in Aswan to a (profitable) relic of the past. Those who remain in what's left of old "Nubia" - living in poor villages around Aswan - are permitted to do so insofar as they generate tourism income for the government.

As with indigenous communities across the world (including at home in the US) the Nubian people of Egypt have been placed in the past, systematically depicted as ancient relics rather than as living, breathing peoples.

A relic of the past

Aswan tourism websites highlight three or four main attractions. Nubian villages, alongside other dead, inhuman sites like the statue of Abu Simbel, feature prominently, encouraging tourists to visit, take pictures, and enjoy the journey into the past. One of the more stylish tourist websites of Aswan writes:

"Nubians are friendly and hospitable. They often invite you to their homes for a cup of tea or "Karkade", a drink made of hibiscus flowers. Many would happily show you their handicrafts. They sometimes invite you to taste their unique 'Shamsi' bread which has a special baking technique.

"The bakers, usually the women of the village, let the dough rise in the sun before baking it. After such hospitality, a reciprocal gesture of generosity is not necessary but would certainly be appreciated!"

Such posting effectively asks tourists to help subsidise the oppression of Nubians, to give them a bit of tourists' money, and contribute to a sort of rentier state in southern Egypt, in which cash is doled out in return for stolen land and silence over the lack of basic rights.

The difference, of course, is that Egypt asks tourists to do the actual paying.

When North Dakota's Standing Rock protesters became the most famous human rights defenders in the world last year, they shook the US so deeply because a past we've long buried came alive when they started marching.

The circumstances of their displacement are different to those of Egypt's Nubians, but the similarities - agricultural livelihoods annihilated, peoples bisected by state lines, the desperate grasp on what's left of native languages - are stark.

Nubians, like the indigenous peoples of the Americas, have been relegated to a history rewritten by the state - a history that romanticises the nature of their violent relocation from their native land. The Nubian human rights defenders fighting for the right of return - now guaranteed by the constitution in Egypt - are slandered as anti-national trouble makers, digging up 'ancient history' to destabilise and disrupt Egypt's alleged march into the future.

"The government has worked hard to pretend our people are dead. We have to work harder to prove we've alive," says Hassam, a NubaTube producer. "We have to remind ourselves there was and is a better Nubian life than what we have now. This is just as important as protesting for our land."

A new generation of protestors

Despite the government's attempts to erase the Nubian peoples' rights to their ancestral land, a new generation of Nubian activists is bringing their fight back to life. In 2014, Egypt's new constitution acknowledged for the first time the Nubian's right of return, promising resettlement within two years. But nearly three years later, the government has made no move towards a concrete plan.

Instead, in October 2015 President Sisi announced a massive land reclamation project, aiming to expand Egypt's agricultural land by 20 percent - by reclaiming for government use land that includes Nubian territory. And in 2016, the government announced it was putting indigenous Nubian land up for sale.

Nubian human rights defenders say this was a step too far.

In November, hundreds of protesters in Aswan staged a "Nubian Caravan," driving dozens of cars towards indigenous Nubian land, determined to return home. Headed for the territory their grandparents were displaced from half a century ago, human rights defenders led more than 200 Nubians straight into a military check point that separates the Nubian people from their indigenous land.

They were caught between a series of check points, and forced to turn back after more than three days in the desert.

Since the Caravan reignited Nubian demands to return home, government persecution of Nubian rights defenders has intensified. Activists now report surveillance, threats, and intimidation as they work to plan another mass movement towards their land.

In a severe escalation, the government arrested six Nubian activists in early January, sending a clear message to human rights defenders that further protests would not be tolerated.

Less than a week later, state intelligence in Aswan called 15 members of the Nubian union to a meeting, and laid out a set of demands. They threatened the union with an asset freeze or closure if the demands were not heeded.

The fifth demand on the list stated that the Nubian's renowned union leader, human rights defender Muhammed Azmy, must resign. The notice also stipulated who would replace him.

"They want to get rid of me because they think that will stop the movement," Azmy told me in an interview in early January. "I'll step down if it's best for the Union, but we won't allow them to choose our new leader. They're trying to get inside a grassroots movement, and destablise it from within."

Azmy took a pen to the list of demands, and rewrote number five to say that the community would instead vote for their new leader. Three days later, the Nubian Union voted - once again - for Azmy to be president.

It's no mystery why the government seems so nervous about the newest generation of Nubian rights defenders.

They are creative, refusing to quit, and disrupting the historic, inanimate Nubian narrative the government works so hard to sell to tourists. Human rights defenders like Hussam and Azmy - much like the Standing Rock protestors they voiced support for on Facebook - are proving that decades of oppression and displacement is not enough to kill a movement, and that often, the most creative of human rights defenders thrive under pressure.


Erin Kilbride is the Media Coordinator at Front Line Defenders in Dublin. She previously worked as a journalist in Bahrain, as Gulf & Yemen Editor at Muftah.org, and with Iraqi refugee populations in the US. Her work has appeared in a range of media outlets including Voice of America, Al Jazeera, Think Progress, Middle East Eye and New Internationalist.

Opinions expressed in this article remain those of the author and do not necessarily represent those of The New Arab, its editorial board or staff.