The depictions feature an artistic marriage between Egyptian iconography and stylistics and pre-Egyptian method and motif.
By Brooks Hays   |   March 22, 2017 at 10:40 AM 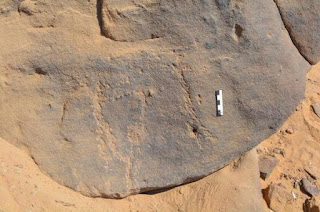 The 6000-year-old rock engravings, a series of dots pecked into the rock with a sharp point, can barely be made out today. Photo by David Sabel/University of Bonn

The ritualistic engravings were discovered by Egyptologists at the University of Bonn and dated to the 4th millennium BC. The art features a series of small dots -- similar to pointillism -- depicting hunting scenes. Researchers suggest the scenes recall shamanistic art found elsewhere.

Scientists found the engravings while excavating a necropolis near Aswan, a city of ancient origins situated on the Nile in southeastern Egypt.

The necropolis, Qubbet el-Hawa, home to more than 80 burial mounds, has offered archaeologists a wealth of Egyptian artifacts through the decades, but the latest find is unique.

Previous discoveries showcased the lives of noble Egyptians living between 2200 and the 4th century BC. The rock engravings are much older.

"Style and iconography provide solid clues when dating these," Ludwig Morenz, head of the Egyptology department at Bonn, said in a news release. "It opens up a new archeological dimension."

Researchers suggest the depictions feature an artistic marriage between Egyptian iconography and stylistics and pre-Egyptian method and motif. The indentations are worn with age, but a close examination revealed three figures: a hunter with a bow, a shaman-like man dancing with his arms raised and, in between, an African ostrich.

"The archer clearly shows hunting for the large flightless bird, while the man with raised arms can be identified as a hunt dancer," explained Morenz.

"This social practice and the associated complex of ideas have barely been looked at in Egyptology," Morenz concluded. "This opens up new horizons for research."