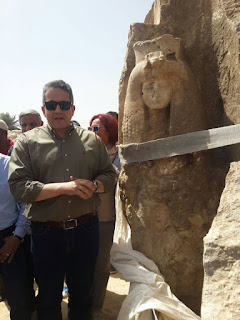 (Courtesy Egypt’s Ministry of Antiquities)
LUXOR, EGYPT—Ahram Online reports that a well-preserved alabaster statue thought to represent Queen Tiye, wife of King Amenhotep III and grandmother of King Tutankhamun, was discovered by Egyptian and European archaeologists at the Amenhotep III funerary temple in Kom El-Hittan. The archaeologists, working under the umbrella of the German Archaeological Institute, were lifting the lower part of a statue of King Amenhotep III when the Queen Tiye statue appeared by its left leg. Minister of Antiquities Khaled El-Enany described the statue as “unique and distinguished,” adding that it is the first alabaster statue of the queen to be unearthed. “All previous statues of her unearthed in the temple were carved of quartzite,” he said. To read about another discovery in Egypt, go to “World’s Oldest Dress.”