By Tom Page, for CNN 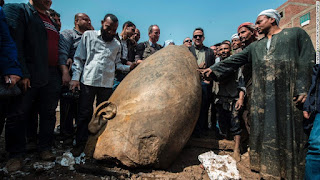 Sections of the statue were uncovered in what was once the temple complex of ancient Heliopolis.

(CNN)A team of archaeologists has discovered a giant 3,000-year-old statue thought to depict Ramses II, in what the Egyptian Ministry of Antiquities is describing as "one of [its] most important archaeological discoveries."

Archaeologists from Egypt and Germany began removing the quartzite statue -- estimated to stand 26 feet tall -- from the ground in Matariya, greater Cairo, in front of state representatives and media crews Thursday.
Minister of Antiquities Khaled al-Anani, who was on site for the unveiling, said the figure is most likely Pharaoh Ramses II, otherwise known as Ozymandias.
No inscriptions on the statue identify it as Ramses II, said Mahmoud Afifi, head of Ancient Egyptian antiquities at the ministry, but its discovery near the gate of a temple dedicated to Ramses II temple makes him the most likely subject.
Much of the temple complex of ancient Heliopolis, where the statue was found, was destroyed in the Greco-Roman period, and antiquities were plundered and sent to Alexandria or Europe. Other building materials were recycled as Cairo reinvented itself in later eras. 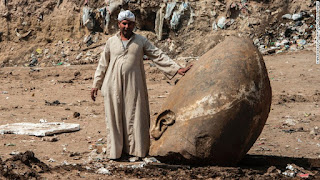 A worker stands with part of the quartzite head, removed Thursday.
Ramses II, a colossus known as the "Great Ancestor" to his descendants, ruled for 66 years from 1279 to 1213 BC as part of Ancient Egypt's 19th dynasty. He conquered swathes of Nubia in modern-day Sudan and Syria.
His exploits have echoed down the ages, inspiring British poet Percy Bysshe Shelley to pen sonnet "Ozymandias" three millennia later in 1818:
"Round the decay / Of that colossal Wreck, boundless and bare / The lone and level sands stretch far away," Shelley wrote, imagining a Ramses II statue in ruins. But rather than endless desert and the Valley of the Kings, this Ozymandias was retrieved from a pit swamped with groundwater. 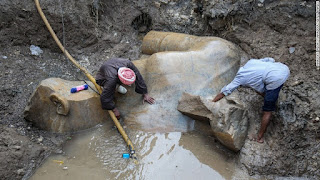 Achaeologists drain the groundwater seeping in to the dig in Matariya, Cairo.

The ministry has come under fire on social media and from some news outlets for using a forklift truck to extract part of the statue from the
Afifi responded by saying the sheer weight of the head was a factor, with Dietrich Raue, who heads the German team of archaeologists involved in the excavation, confirming the statue had not been damaged in the process.
Archaeologists are still working out how to remove the even larger torso portion of the statue, the ministry adds.
The dig has also uncovered a 31-inch section of a life-sized limestone statue of Ramses II's grandson Seti II. The dig is continuing, and experts hope to uncover more of the Ozymandias statue for restoration.
In the meantime, the head and torso will be moved to the Grand Egyptian Museum in Giza, which is due to open in 2018.