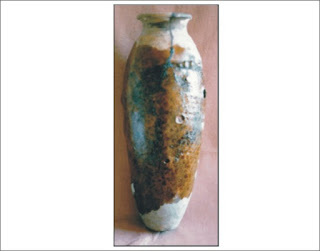 Here is a grotty (sorry) picture of one of our Early Dynastic pots (AB98). It came to us from Aberystwyth University in 1997, is 45.5cm high and is oozing 'oil'. Recently the oil has been analysed by Andrew Hardy and Paul Finch. It was found to contain non-ruminant (i.e. not cow or sheep/goat) animal fat, probably pig fat. There were also traces of grasses which possibly scented the oil.

We do not know where this vessel came from, though it is likely to have come from a tomb.

Apparently Early Dynastic (3100-2686 BC) Egyptian royal courts had departments which dealt with the raising of pigs and a separate department for rendering cow fat (Wilkinson 1999, 110). Oil was used in food but also for anointing and for cosmetics. Many hundreds of such jars have been found in the tombs of the elite.

The results have been published in Pharmaceutical Historian 47/1 2017.