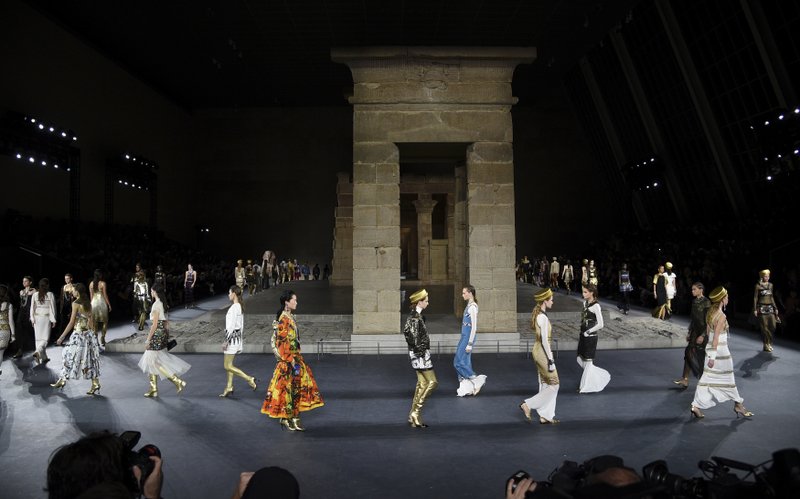 Models walk the runway at the Chanel Metiers d'Art 2018/19 Show at the Metropolitan Museum of Art on Tuesday, Dec. 4, 2018, in New York. (Photo by Evan Agostini/Invision/AP)

A shiny and glamorous version of ancient Egypt ruled the evening — with entertainment royalty on the runway, too — as Chanel brought its traveling fashion show to New York and the famed Temple of Dendur at the Metropolitan Museum of Art.

Designer Karl Lagerfeld, a lover of lavish spectacles, chose the dramatic venue for his 17th annual "Metiers d'Art" show, which takes place in a different city each year and celebrates the craftsmanship of the artisans that partner with Chanel.

The imposing temple, completed in about 10 B.C., is a highlight of the Met's collection and a favorite site of the museum's annual spring fashion gala. Indeed, the Chanel show felt like a mini-Met Gala with celebrity guests including actresses Penelope Cruz, Julianne Moore, Margot Robbie, Marion Cotillard and Lily-Rose Depp, comedian Jerry Seinfeld, and director Sofia Coppola.

A celebrity even walked the runway: Pharrell Williams, who recently announced a collaboration with Chanel. Arriving to a few whoops from the crowd, the singer looked royal indeed, in a gold mesh top adorned with designs resembling a wide, jeweled Egyptian necklace, and brilliantly shiny gold leather trousers.

Gold shimmered all over the runway, as models strolled past the floodlit temple in everything from gold thigh-high boots to gold brimmed hats to glistening dresses with golden feather adornments, to shoulder-length gold earrings. There was also some distressed denim, and definitely some tweed, but Egyptian-style bling was the order of the day.

One particularly stunning shoulderless gown looked like an Egyptian mosaic, with interlocking "tiles" in the Egyptian color palette of light and dark blues, red, and of course, gold.

The handiwork involved in the garments was displayed in brief videos posted by Chanel on Instagram ahead of the show, from artisans' ateliers, or workshops: metalwork and jewelry-making from Goossens, pleating from Lognon, feather and flower adornments from Lemarie, embroidery from Montex, costume jewelry from Desrues, embroidery and tweed from Lesage, Massaro shoes, and golden Maison Michel hats.

The show came only hours after the French fashion house announced it was renouncing the use of exotic skins like crocodile, lizard and snake in future collections, because they were difficult to source ethically. Effectively that means animal fur as well, which the house has used rarely.

On the red carpet, actress Cruz, who recently began working with the luxury label, spoke of how much she enjoyed collaborating with Lagerfeld.

"I think we can use the word genius to describe Karl," said Cruz, in a navy gown she said was from the last "Metiers d'Art" collection. "He's very unique, and to spend time with him and see how much he knows about everything and how much curiosity he still has to keep growing and to keep learning ... he works so hard."

Lagerfeld, 85, is also known for cutting no corners when it comes to fashion show spending, and his Temple of Dendur extravaganza — only the third time he has shown in New York — will certainly not change that reputation.

As they left the museum, guests were escorted into black cars for a ride about 10 blocks south into Central Park, where an indoor venue had been transformed into a Chanel "diner," complete with food trucks dispensing drinks, cheeseburgers and fries, and milkshakes.