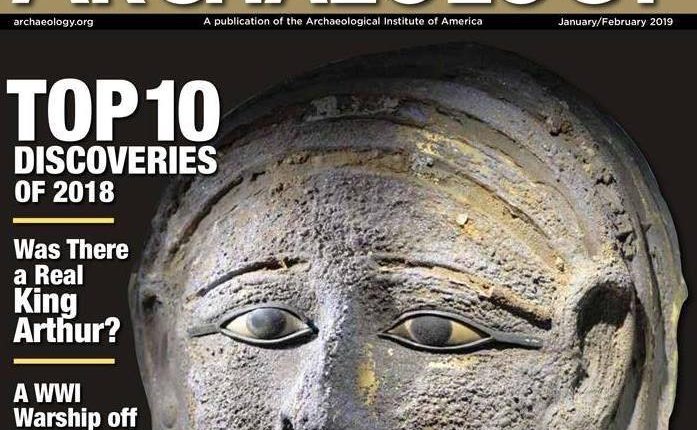 The world's most famous archaeological magazine, Archaeology, announced that the mummification workshop found in Saqqara in July was one of the year's top 10 discoveries, putting the gilded silver mask unearthed throughout the excavation work, on its first 2019 published issue.

The mummification workshop contained several burial chambers dating to the Saite-Persian Period (664-404 BC). It was unearthed during the excavation work carried out by an Egyptian-German mission from Tübingen University, south of King Unas' Pyramid in Saqqara.

The magazine described the discovery as "the first of its kind ever identified". The article stated that the discovery "has revealed tantalising new clues to how mummies were made during the Saite-Persian period of the mid-first millennium B.C."

The workshop also included a large collection of pottery vessels, ceramic bowls, measuring cups with different sizes, and a residue of oils and substances, with written instructions for using them in the mummification process. The liquids found are the first ones to unveil the secrets of the process of mummifying bodies. They are still being tested and examined by the mission.

The one-of-a-kind discovery also led the mission to unearth a chamber full of mummies. The mudbrick and limestone workshop was divided into two rooms with a mudbrick ramp between them, according to the state-owned media publication, Al-Ahram Online.

Archaeologists found proofs that the two rooms where the preparation of the mummies took place were wrapped in linen.

A tunnel was also discovered in the middle of the workshop, containing several chambers at different depths, each containing dozens of buried mummies, with inscriptions revealing details.

One of the wooden tombs was painted and plastered. The demotic text on it revealed that the second priest of Mut, and the priest of Niut-shaes, was buried in it. The famous gilded silver mask was found above the head, and the eyes are inlaid with calcite, obsidian, and onyx. The mask is around 250 grams, and 23*18.5 centimetres in size.

At the press conference where the discovery was announced, Ramadan Badry, director of the Saqqara Saite Tombs project, and professor at Tübingen University, stated that the mask is rare and one of a kind. He explained that similar designed masks had a huge religious meaning in the Ancient Egyptians' religious beliefs, as most of the religious inscriptions said that the bones of the gods are made of silver, and their flesh and skin are made of gold.

"A mummy mask of silver and gold is the Ancient Egyptians' way of transforming the deceased into a god," he said.

Another mummy was discovered, according to Al-Ahram, with a written demotic inscription on its covering layer, revealing a dispute between a wife and her mother-in-law over the body of her husband buried in the shaft. The words reflected the mother's dissatisfaction over burring her son in the unearthed shaft.

A third sarcophagus was found with a wealthy woman buried inside called "Tadiho".