Will New York be the New Thonis-Heracleion

If you haven't heard about Thonis-Heracleion, it is an ancient Egyptian city lost for over 1,200 years and thought to be a myth. It's been discovered beneath the waves of Abu Qir Bay on the Mediterranean coast of Egypt. 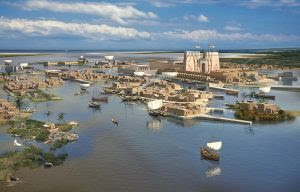 Researchers are attempting to answer questions like how did the city sink? There is some evidence that areas of the hybrid foundation of hard clay and water under the city began to liquify or dissolve rapidly. There is evidence of tsunamis and severe flooding. As I read articles about Thonis-Heracleion I couldn't help but think of our current disasters. Did a number of soothsayers portend the eventual doom and no one listened? Did Egyptian and Greek scientists tell the local politicians that any day now the entire kit and caboodle would be sub-oceanic? Did the wealthy merchants, bankers, trading houses ignore the warnings because Thonis-Heracleion was making so much money as a central trading port?

97% of scientists believe that humans are contributing to climate change. We certainly have enough evidence that our Thonis-Heracleion disasters are adding up. Yet corporations like the fossil fuel industry wishing to maintain capital gains, lobby government to decry scientific evidence. Campaign coffers swell from contributions to elect people who will say anything to keep the capital infusions and their seats. The issue goes beyond simple denial in our current White House. There is out and out sabotage.

Last year I was doing some research into remediating soil in urban communities. My intent was to supply information to the Cook County Land Bank and City on ways to remediate (clean toxins from vacant lots) and beautify neighborhoods in the process. The information ended up as a proposal to both County and City. During my research I looked at Region V Environmental Protection Agency for particular properties in Chicago that had significant amounts of chemicals, metals, etc. that deem the property toxic. I found information that was very helpful in planning remediation schemes in my community.

Last week I decided to update the proposals with further information. I clicked on a link I had previously embedded in the original documents that provided the EPA information on specific sites and the toxins ….404 Page Not Found. Gone! Vanished! Deleted!

The new "EPA" does not believe in climate change nor do they believe that anything should stand in the way of corporate profit. Go ahead and build on contaminated soil. Continue to poison the drinking water. Let the seas rise. Let the hurricanes blow and the air become toxic.

In spite of Puerto Rico, the Virgin Islands, the eroding islands of Bangladesh where over 26,000 people each year lose their homes because the islands are now under water our government denies, denies and denies some more.

As a matter of fact let us ignore situations like New York flooding until it truly is a direct correlation to Thonis-Heracleion. Maybe in 1,000 years or more some future archeologists will discover the loss city of New York under the waves and like Thonis-Heracleion they will bring up amazing artifacts like the statue of liberty and a big TRUMP sign. 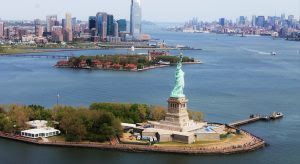 Is New York next?

For more on endangered cities: