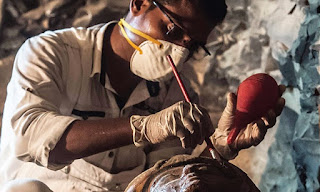 About 70 foreign missions will begin working on the different archaeological sites in Luxor within the upcoming weeks, according to Waziri - File Photo

Last month all eyes were on Egypt as news of the discovery of an 18th dynasty
(1549/1550 BC to 1292 BC) tomb was announced. The tomb, unearthed in Luxor,
Upper Egypt, belonged to Amun-Re's goldsmith, Amenemhat (Kampp 390), Egypt's Minister of Antiquities Khaled Anani announced in a press conference last month.

The tomb was found to contain a number of coffins carrying the remains of the goldsmith, his wife and his son. It also houses a large well at a depth of eight meters, as well as artifacts, pottery vessels and ushabti statues and equipment used by the famous Pharaonic gold trader.

''The newly discovered tomb has taken the archaeologists to the entrances of new tombs that are about to be discovered,'' recounted Mostafa El Waziri,= the head of the Luxor Antiquities sector, during the conference, which was attended by Governor of Luxor Mohamed Badr, the Cypriot ambassador and members of both local and international media.

Famed Egyptian archaeologist Zahi Hawass described the latest discovery as "one of the most important discoveries in the modern era." Waziri agrees, announcing he is confident that the new tomb, which is located in the West Bank in Luxor,will be an even more important find than the Osrahat cemetery, which was discovered last April.

The number of ushabti statues discovered is about 1,400, in addition to mummies and masks belonging to the owner of the tomb that are plated with different colors.

Located in the Draa Abul-Naga necropolis on Luxor's West Bank, the cemetery contains an entrance situated in the courtyard of another Middle Kingdom tomb, Kampp 150. Hawass explains that the discovered tomb was extremely rich with antiquities as its owner was a jewellery maker, and almost half of its contents were in a good condition.

The entrance leads to a room that contains a niche with a dual statue depicting the tomb owner and his wife. The statue shows Amenemhat sitting on a high-backed chair beside his wife, who wears a long dress and wig. Between their legs stands a small figure of their son. The cemetery has two burial shafts.

The Tomb Unearthed In Luxor

The main burial shaft is seven meters deep and has a collection of mummies, sarcophagi and funerary masks carved in wood, along with a collection of ushabti statues. The second shaft contains a set of 21st and 22nd Dynasty sarcophagi subject to deterioration during the Late Period.

In the open courtyard, the mission stumbled upon a maze of Middle Kingdom burial shafts, where a family burial of a woman and her two children was unearthed. It includes two wooden coffins with mummies intact and a collection of headrests. One of the coffins contains the head-rest of the deceased woman, as well as a group of pottery vessels.

The mummies of both their sons were found in good condition. The Egyptian mission also discovered limestone remains of an offering table, four wooden sarcophagi partly damaged and decorated with hieroglyphic text, scenes of different ancient Egyptian gods and a sandstone dual statue of a gold trader in King Tuthmose III's temple named Mah.

A group of 150 small ushabti statues carved in faience, wood, burned clay, limestone and mud brick were also found. The mission also discovered a collection of 50 funerary cones. Waziry announced that the work in this tomb is not over yet, as the coming period is expected to witness the discovery of several pharaonic tombs and the excavation work will continue in the coming months.

Buried under the sand

About 70 foreign missions will begin working on the different archaeological sites in Luxor within the upcoming weeks, according to Waziri. He adds that the Egyptian Ministry of Antiquities is seeking to improve all archaeological sites ahead of the
tourist season by developing and renovating temples, royal tombs and archaeological sites. Hawass had previously announced that what Egypt discovered thus far represents about 30 percent of its total antiquities; the remaining 70 percent is still buried under the sand.