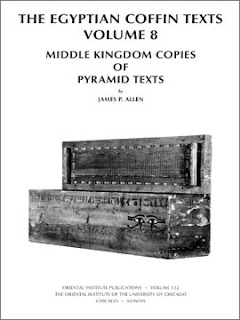 With the appearance of this volume, the Oriental Institute marks the true completion of the Egyptian Coffin Texts Project, an international cooperative program begun by James Henry Breasted and Alan H. Gardiner in 1922 and edited by Adriaan De Buck from 1935 until his death in 1959. When published in 1961, volume 7, De Buck's final volume, was announced as "the last volume of the autographed Coffin Texts in the contemplated Project" (p. vii), although the Oriental Institute had never produced the autographed edition of Pyramid Texts within the Coffin Text corpus that had been explicitly promised in the introduction to volume 1. Assumed to comprise a "distinct" and "foreign body" within the Coffin Texts, these long-lived spells were "reserved for later" (p. xi). After a lapse of forty years, a formally renewed Coffin Texts Project was authorized by the director in 2001, with the goal of completing the Oriental Institute's outstanding commitments. The translation volume once envisioned and entrusted to Tjalling Bruinsma had been rendered unnecessary by the publications of Raymond O. Faulkner in 1969 (Pyramid Texts) and 1973 –1978 (Coffin Texts), which serve to engage scholars and laymen alike. Glossaries, bibliographies, symposia, and detailed textual studies appeared, but the critical edition of middle Kingdom Pyramid Texts remained unaccomplished. by careful examination of the Oriental Institute's original collation sheets and unpublished sources from Lisht, James P. Allen, after years of concentrated study, has now fulfilled the task admirably. It is hoped that the new edition stimulates discussion not only of the longevity of the Pyramid Texts, but of the nature of the Coffin Texts themselves. While breasted insisted that the Pyramid Texts were "sharply distinguished" from the Coffin Texts, the frequent appearance of "Pyramid Texts" on coffins (among the narrowly defined "Coffin Texts") leaves this opinion open to question. ironically, the one coffin acquired in Chicago by Breasted for study by the Coffin Texts Project (OIM 12072) contained only "Pyramid Texts" and was therefore excluded from the initial seven volumes. Now at last these Middle Kingdom texts on a coffin can be examined among the "Coffin Texts."