It's one of the great wonders of the ancient world: the magnificent tomb of Pharaoh Seti I, the most elaborate and beautifully decorated in Egypt's Valley of the Kings near Luxor. And in an extraordinary feat of modern technology, a specialist art company, Factum Foundation, has begun a five-year project to 3D-print a perfect copy of it. The eventual aim is to install it in Egypt on a site not far from the original.
The first two facsimile chambers to be scanned and printed are now on display at "Scanning Seti: The Regeneration of a Pharaonic Tomb," a new exhibition at the Antikenmuseum Basel in Switzerland. As far as I could tell, the chambers seem pretty much indistinguishable from the real thing.
Related:
How ivory reminders of death became a luxury

The man behind the project is Factum Foundation's founder, Adam Lowe. He freely admits that Seti's tomb is his obsession, calling it "the most important library of Pharaonic religion, philosophy, art, poetry and science; the source material for the three Abrahamic religions."
From a workshop in Spain, Factum Foundation has developed the expertise to 3D-scan and 3D-print virtually any work of art. They've been hugely successful making pieces for contemporary artists, but Lowe seems to be more focused on the past. 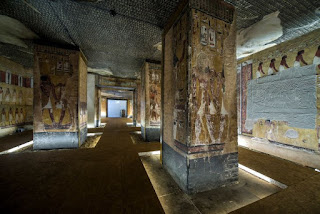 Factum Arte is displaying copies of two chambers in the tomb of Pharaoh Seti I at Antikenmuseum Basel in Switzerland. Credit: Courtesy Ruedi Habegger/Antikenmuseum Basel/Sammlung Ludwig
Lowe had hoped to begin scanning Seti's tomb in 2001, but was eventually diverted into making a facsimile of Tutankhamen's tomb instead. This replica opened as a tourist attraction in the Valley of the Kings in 2014. Lowe and his team finally started work in Seti's tomb in 2016.
Seti and Tutankhamen reigned as pharaohs some 40 years apart -- a mere blink of the eye in the three-millennia history of ancient Egypt. And as their royal status demanded, they were both buried in the Valley of Kings, and yet Tutankhamen is now infinitely more famous.
The reason is simple: Tutankhamen's tomb, discovered by English Egyptologist Howard Carter in 1922, was found relatively undisturbed. His gold death mask, his gilded chariots and some 5000 other extraordinary artifacts were still intact. A selection of these treasures (and approved copies) have toured the world for the last 40 years or so, adding immeasurably to his mystique and fame -- as well as Egyptian coffers.
Seti's tomb -- sometimes referred to as "Belzoni's tomb" -- was discovered in 1817 by Giovanni Belzoni, a 6-foot-7 Italian explorer, engineer and former circus strongman. The tomb also quickly became a sensation of its day, but it had been looted in antiquity. The only substantial artifact still in situ was his alabaster sarcophagus, which was evidently too heavy to steal.

For the Seti exhibition in Basel, Factum Foundation has recreated two of the tomb's most beautiful rooms, the Hall of Beauties and the adjacent Pillared Room, as they are now: much faded and vandalized. The outstanding highlight of the show is a second, more ambitious version of the Hall of Beauties as it was found in 1871.
It's hard to distinguish what's original (the show includes a few original fragments under glass) and what's been copied. This is in large part thanks to advancements in 3D scanning and printing, as well as photogrammetry -- the science of taking measurements from photographs.
Related:
'Incredible' ancient Roman neighborhood unearthed in France
Lowe is convinced that facsimiles have a central role to play in the future of tourism and art conservation. Once you have the data, not only can you create a copy, you can monitor the original's deterioration.
Susanne Bickel, an Egyptologist at the University of Basel, has been doing fieldwork in Seti's tomb for many years. Interviewed in the recreated Hall of Beauties from 1817, she agreed that "Yes! Absolutely! This is resurrection!"
She believes that in a scientific and informed way and "without becoming Disneyland or kitsch," a facsimile can sometimes show us more than the original. She feels that we are just beginning to realize the potential of the new technology. 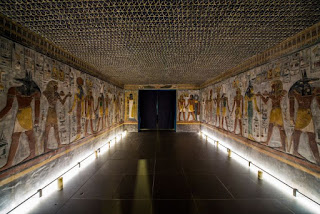 Bringing history into the future

Shortly after his discovery, Giovanni Belzoni wrote evocatively of first entering Seti's tomb: "We perceived, that the paintings became more perfect as we advanced farther into the interior." The extent and richness of the relief decoration overwhelmed him. This was the find of a lifetime. He lit torches of ancient shabti (small wood figurines) found on the floor to help illuminate his discovery.
In 1817, watercolors were commissioned to show how vivid and fresh the frescoes were. But then Belzoni set about making copies of some reliefs; wax molds were taken of the walls and plaster casts made. In the process, much of the paint was stripped off and, in some places, the walls were left entirely bleached of color. Belzoni exhibited the resulting facsimile in London in 1821. It triggered a craze for Pharaonic Egypt. Egyptomania was born and the first tourists headed to Luxor.
Related:
Hidden details found in art's great masterpieces
Trophy hunters hacked out great slabs of the tomb -- relief figures of deities and cartouches -- and sold them. Many fragments ended up in European museums, including the Louvre, the British Museum and the Pergamon Museum in Berlin. Seti's sarcophagus is now in Sir John Soane's Museum in London. Soane paid £2,000 for it in 1824.
Seti's tomb, still recognizably glorious in its ambition and craftsmanship, was left pitifully damaged and, until recently, had been shut for many years.
Lowe and his nonprofit arm, the Factum Foundation for Digital Technology in Conservation, will resume scanning in the tomb early next year. They'll pick up where they left off, moving on to the next and largest chamber, the crypt, with its vaulted ceiling of astronomical decoration. 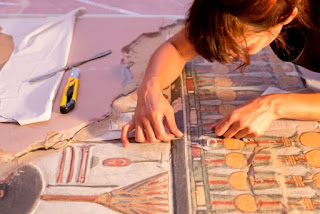 A Factum Foundation employee works on the facsimilie of Pharaoh Seti I's tomb. Credit: Courtesy Oak Taylor Smith/Factum Foundation for Digital Technology in Conservation
Already, three Egyptians have been trained to use the scanners. The first was a young Egyptian Egyptologist, Aliaa Ismail, and she trained her two colleagues. The intention is to build up a local team of 10: five men, five women.
Lowe remains keen to share Factum Foundation's expertise. He speaks of the urgency of recording all the ancient sites throughout the Middle East. "A real imperative," he says, "given the increased instability."
Related:
Bronze Age community unearthed in Britain
Lowe is set on raising 10 million euros ($11.6 million) for an international training program over the next five years. He says that he's already found willing collaborators in Mosul, Aleppo and Amman, as well as in Afghanistan and Dagestan, Russia.
For the Antikenmuseum Basel show, Factum Foundation also created a replica of Seti's sarcophagus. You can walk around it, take a closeup look, as I did.
But just as enlightening is their virtual reality version. Here you can see it in all its wondrous semi-translucent detail: hundreds of tiny figures subtly carved into the alabaster. There was also something you can't easily see in the flesh: a ghostly etching of the sky goddess Nut, incised at the bottom of the coffin. Initially, I mistook the figure for Seti himself.
As the virtual camera tracked over the sarcophagus, there was yet another revelation. Chiseled into the rim was a familiar name: G. Belzoni.
"Scanning Seti: The Regeneration of a Pharaonic Tomb" is on at Antikenmuseum Basel in Switzerland until May 6, 2018.
Posted by Glenn Meyer at 7:03 AM