This superhero team is saving Egypt, one crime at a time. 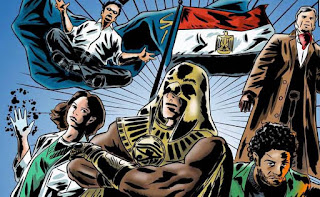 Comic book culture has become such huge part of the 21st century that it's almost impossible to get away from. There's a huge blockbuster movie out every other weekend; every big television station has its own comic book based hit show; and there are superhero pop culture references almost everywhere. But who's really complaining?

Superhero culture has played an enormous role in the lives of millions around the world, but the traditional comic books, that are mostly based in the USA, don't really play into our Egyptian values. The Egyptian comic book scene has long needed a superhero that we can actually relate to and this new comic book El 3osba is giving us 6.

El 3osba (The Gang) follows the adventures of six Egyptian superheroes that come from six different time periods in our history. The super team solve Egyptian crimes and address problems that are important to Egyptian society. "Comics in general tend to reflect the issues within every community, and I'm concerned with the problems that exist within ours," explains founder - engineer by day, story teller and comic book artist by night - John Maher. The self-professed "comic geek", who is also a writer and has his own theatre troupe, founded the comic book because he wanted his work to take on topics that hit close to home - the Egyptian supercrew battle issues such as sexual harassment and corruption, just to name a few. "Foreign comics might have aliens as the villain, but for El 3osba, I thought about having the heroes battle issues that are real problems in our community. Why not have our issues personified in 'villains' that the superheroes then fight?" he explains.

I want readers to be able to relate to the hero; to know that they may have flaws and imperfections but they can overcome them, and they can be a hero in their own right

The six characters are all distinctly different, but their strength comes from just that. "There are six characters and each has his own dynamic and brings something different to the story. Horus for example is from ancient Egypt and his thing is that he's very traditional, but then there's another character who's from modern day Egypt, and he's very progressive and has modern views, and they disagree all the time but in a way that's where their powers lie," says Maher.

Another aspect Maher believes is crucial in his comic book is not shying away from showing each hero's flaws. "I think in Egypt, the traditional hero is portrayed as perfect. But in reality - and you can see this in a lot of international comics such as Batman - the hero also has his own flaws. I want readers to be able to relate to the hero; to know that they may have flaws and imperfections but they can overcome them, and they can be a hero in their own right," Maher elaborates. 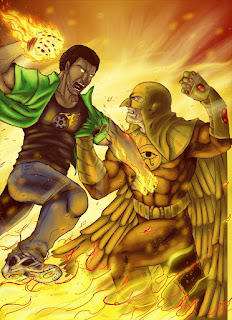 The very first issue of El 3osaba was released a few years ago at the first edition of the CairoComix convention. Maher and super team artist Ahmed Raafat and storyteller Maged Raafat have been creating a new issue every year since. Recently the super team have been trying to release more digital content onto their Facebook page. "We usually do a 32 page comic every year and release it in hard copy at CairoComix and a bunch of other venues but we've been getting a lot of requests to release more content so we're trying to create an 8 or a 12 page comic to be released every month on our online platforms," Maher tells us.

You can get read the adventures of El 3osba on their Facebook page, the Rusumat app, and you can even get a hard copy upon special request.