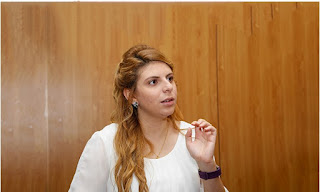 From Madrid to Seti I, Aliaa Ismail's journey takes an in- teresting path between heritage and technology. When the 26-year-old chose to major in Egyptology, she never imagined that she would one day be the onsite manager of one of Egypt's most important archaeological projects. Ismail double majored in architectural engineering andEgyptology at the American University in Cairo (AUC). "At AUC, I really got to enjoy Egyptology as it really was something unique and very specific to my heritage. It's always good to be involved in your heritage," she says.

Under the supervision of the Egyptian Ministry of Antiqui- ties, the Theban Necropolis Preservation Initiative utilizes digital technology to preserve cultural heritage. Ismail's role as director of the training center for Luxor's 3D scanning and documentation is to lead a team of scientists working on cre- ating exact facsimiles of tombs, including Seti I's tomb, that are, or will soon be, closed to the public for conservation. 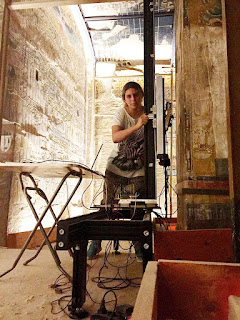 Egyptian Egyptologist Aliaa Ismail - Egypt Today/Karim Abdel Aziz
She explains that "3D scanning is basically a method for understanding the surface that you are dealing with. When you look at something, what you see is not what you get.For example, a flat wall is not flat, it has details, it has scratches, very minor things that you cannot see but only feel," explains Ismail. "What we try to do is get this data that you can only feel into a form where you can actually see it. Understanding objects in this way allows you to conserve them and to docu- ment them better because it gives you a permanent record as they exist right now."

Located in a small lateral valley in the Valley of the Kings in Luxor, the tomb of Seti I was discovered in October 1817 by Giovanni Battista Belzoni, and quickly made international headlines with exhibits held in London in 1821, and later in Paris. The tomb, which is the largest in the Valley of the Kings, remained closed to tourists for some four decades before be- ing officially reopened in 2016.

In collaboration with the Factum Foundation for Digital Technology in Conservation in Spain and the University of Ba- sel in Switzerland, the Mapping Project focuses on sustain- ability and knowledge transfer, and depends both on devel- oped technologies and human skills. It began in March 2016 with the recording of the vast Nineteenth Dynasty tomb of Seti I, and will include the development of a new training center for digital technology in conservation at Stoppelaëre´s House, also known as Hassan Fathy's house. "The Factum Foundation would like to have an Egyptian team of up to 10 people onsite in Luxor. What we've started doing is training them two at a time, and the ones we have now are brilliant and very recep- tive to understanding new technology," says Ismail, explaining the eventual results will help enable conservators, scholars and historians to see various layers of each artifact and understand the complex history that comes with it, just by its texture and color.

Although Ismail now gets along well with the team, she says it was a real challenge at first. "I'm leading a team of men and that's hard in a place like Luxor where women are perceived to [have a lower status] than men," says Ismail. "I had to establish myself in a manner enabling them to perceive me [positively], and not be threatened by me as a woman, as a boss."
Posted by Glenn Meyer at 4:55 PM