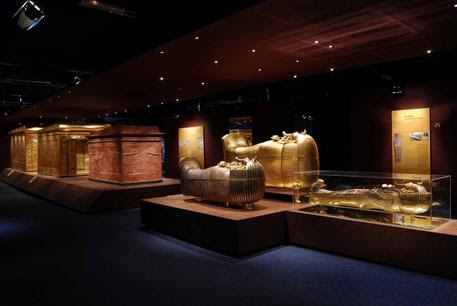 (ANSAmed) - CAIRO, NOVEMBER 27 - An exhibit will be held in Viterbo from May until November next year on copies of Egyptian archaeological treasures, the Italian fundraising society Società Italiana di Beneficienza (SID) has announced. SID is the sponsor of the initiative presented as an unprecedented event in Italy.
The exhibit will be held in the Palazzo dei Papi, the president of SIB, Sicilian philanthropist Eugenio Benedetti Gaglio, told ANSAmed.
The exhibit will showcase, among others, perfect copies of the entire treasure of Tutankhamun, with the famous golden death mask, the sarcophagus of the Pharaoh who died young and became a symbol of Egyptomania.
Now Benedetti Gaglio has said that the exhibition will include some 150 pieces such as ''the eight Sphynxes, a perfect marble copy of those in the triumphal entry to the great temple of Karnak'' in Luxor. The pieces of the treasure of Tutankhamun to be exhibited will also include the ''lid with the canopic jar, the famous little Pharaoh throne, the great 'naos' and the collection of jewels presents''.
The reproductions, at the end of the show, will be put on sale and, in particular, there is a ''deluge of requests'' for the sphynxes, said Gaglio. These are very expensive large pieces that can only be afforded by companies, institutions and the wealthy. Visitors will be able to buy ''2-3,000 replicas of objects of small dimension, which are exactly similar to the originals extracted from Egyptian tombs, all with a certificate of authenticity put on sale through us at a special price by the Egyptian ministry of antiquities'', said the former businessman.
The economic aspect, the foundation stressed, is only marginal: the spirit of the initiative is to renew relations between Italy and Egypt that are currently damaged, through an archaeology that is accessible to almost everybody, without necessarily needing to go to Cairo to admire it.
The choice of setting it up in Etruscan Lazio, with its almost unique parallelism to the Egyptian cult of the dead, gives further meaning to the show that is part of two other initiatives organized by SIB next year in Italy, aimed at promoting cultural and religious dialogue between the two shores of the Mediterranean. They are an exhibition of Coptic art, with the reproduction of rare icons in a holy Italian site still to be defined, and a series of four Egyptian folk music concerts. (ANSAmed).