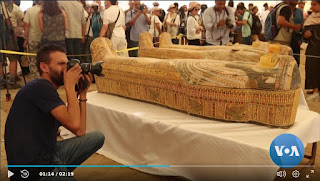 Egypt has unveiled the contents of 30 ancient wooden coffins recently discovered in Luxor in what officials call the country's largest archaeological find in more than a century. Officials say the 3,000-year-old coffins shown to the media Saturday are just a small part of what is yet to come as the archeological excavations resume after years of decline. VOA's Zlatica Hoke reports.