An Eerie Egyptian Burial Has Been Found, With Nonsense Hieroglyphs on The Coffin

An Eerie Egyptian Burial Has Been Found, With Nonsense Hieroglyphs on The Coffin

When ancient burials are discovered in the sands of Egypt, the stories we hear are usually similar. High-ranking officials and nobles buried with rich grave goods, elaborate coffins, and often cartouches naming the deceased, so we know who they were. But a recent discovery paints a rather different picture.

Archaeologists have found dozens of 2,000-year-old burials near the necropolis of Saqqara that are much more minimal, even clumsy. Perhaps this is the resting place for people from the working or middle class, rather than the elite.

"Most of the mummies we discovered last season were very modest," Egyptologist Kamil Kuraszkiewicz of the University of Warsaw told the Polish Press Agency in July this year.

"They were only subjected to basic embalming treatments, wrapped in bandages and placed directly in pits dug in the sand." 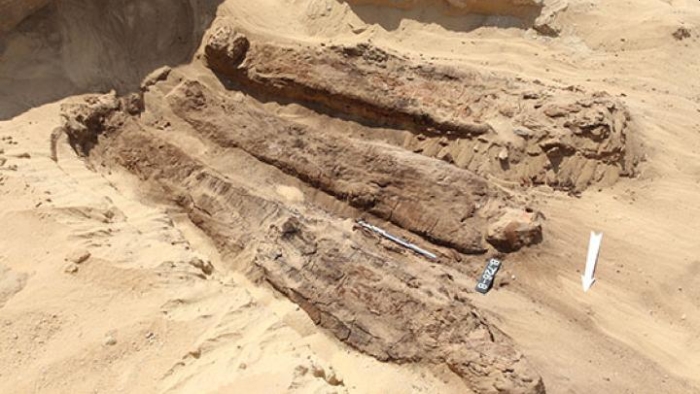 Polish archaeologists have been working in Egypt for decades to help excavate the Saqqara necropolis, a vast "city of the dead" that served the ancient capital of Memphis - and several royal dynasties - for thousands of years.

It's an incredible repository of the region's history, filled with stunning tombs beautifully preserved in the dryness of the desert, revealing a great deal about ancient Egyptial burial practices.

In the dig of September 2018, Kuraszkiewicz and his team were excavating an area between the Pyramid of Djoser (at over 4,600 years old, that's the oldest pyramid in the world) and the Dry Moat, a rectangular ditch 20 metres deep (65 ft) and 40 metres wide that surrounds the ancient pyramid.

This is where they found the poorly preserved mummies, buried outside the pyramid. For the ones found in the Dry Moat, the wooden coffins had decayed, and they weren't placed in tombs, but directly in the sand. In addition, some of the coffins had been looted, and were empty.

But for all their decay, there was enough decoration remaining on one of the coffins to make out some details. 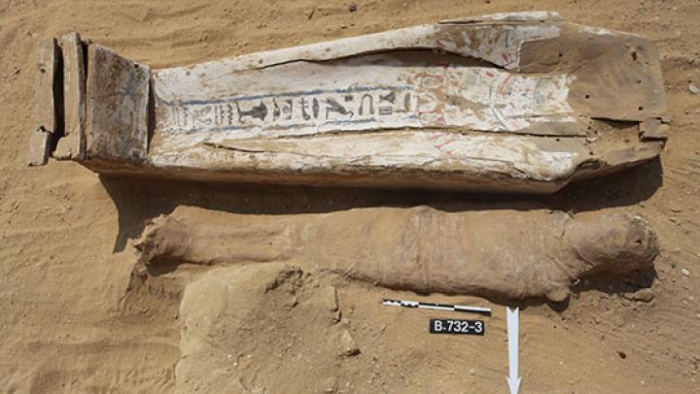 Where the neck of the interred mummy would be, a necklace had been painted on the coffin lid, and imitation hieroglyphs were inscribed lower down. However, rather than revealing the name of the deceased, the glyphs were utterly nonsensical.

"Apparently, the artisan who painted it could not read, and perhaps he tried to recreate something that he had seen before. In any case, some of the painted shapes are not hieroglyphic signs, and the whole does not form a coherent text," Kuraszkiewicz said.

In addition, two figures of Anubis, the jackal-headed guardian of the Underworld, were painted at the foot of the coffin, "beautifully clumsy" according to Kuraszkiewicz, and depicted in an unusual shade of blue. Normally, Anubis was painted in black.

Exactly why he was depicted in blue is unclear; perhaps the artist was not familiar with the artistic conventions, or perhaps it was a reference to the gods' precious lapis lazuli hair.

The coffin itself had been looted, and the burial mask that would have covered the mummy's face on the outside of the coffin was missing, so anything else it could have revealed is irrevocably lost.

Although the trappings of the burials are simpler and more modest than the rich tombs found in other regions of the necropolis, the mummies show that ordinary people had similar funerary practices to the wealthy, and that they may have mimicked the funerals of the rich, even if they didn't understand them.

These recent findings may be able to tell us more about the stratification of Egyptian society 2,000 to 2,500 years ago.

So far, Polish archaeologists have excavated some 500 "simple" burials from the same region of Saqqara. They believe this section was for the burials of ordinary people, and not the elites interred elsewhere in the complex.