A month from now, the Museum of Fine Arts in Boston will welcome visitors to a temporary exhibition 'Ancient Nubia Now' that will showcase over four hundred Nubian artifacts excavated between 1910-1930. This week, we are pleased to host Nicholas Brown as guest scribe to share his experiences 'excavating' the MFA archives this summer in preparation for their new exhibition.

"It is the unexpected that brings joy…into the life of the archaeologist."  -George A. Reisner (The Boston Herald, October 20th, 1929)

Typically, museums are best-known for their collection of art and artifacts on public display. This makes sense, since this is usually the only material that a visitor will engage with when they come to visit a museum. However, as is often the case with many museums around the world, a "collection" not only means the physical objects themselves, but it also includes archival materials. With over 40 years of excavation experience in Egypt and Sudan, the Museum of Fine Arts (MFA), Boston has an unparalleled archive of paperwork and documentation related to their archaeological fieldwork. Today, researchers can access the MFA's treasure-trove of unpublished archaeological documentation, personal correspondence, excavation journals, maps, photographs, notes on scratch-paper, and even receipts for expedition equipment!

George Andrew Reisner, the director of the Harvard-Boston Expedition, was a thorough archaeologist and meticulous note-taker (he would often record in his excavation diaries who visited for tea on what day). During his time in Cairo, living at the Expedition's house beside the Pyramids of Giza, Reisner kept copies of all his correspondence, letters he received, receipts, and official licenses and documents related to his archaeological work. After his death in 1942, this collection of paperwork was packed into crates and sent to the MFA, where it became an important part of the Egyptian Art Department's collection. Since its arrival in Boston, the archive has been organized and catalogued by curators, department interns, and volunteers, in order to make them more accessible to researchers (for now, the public is able to access the documents related to the museum's excavations at the Pyramids of Giza by visiting Digital Giza). Because of Reisner's habit of keeping copies of everything, it is sometimes possible to reconstruct whole conversations he had with certain individuals, since the MFA has carbon-copies of many of the letters that Reisner authored in response to letters he received.

The "Harvard-Boston Expedition and Sudan Antiquities Service Archive" houses various documents that relate to the Expedition's work in the Sudan from 1913 until 1932. During their time in northern Sudan, the team surveyed, documented, and excavated the sites of Kerma, Gebel Barkal, Nuri, el-Kurru, Meroë, and the cataract forts of Semna, Shalfak, Mirgissa and Uronarti. Reisner's correspondence with the Sudan Antiquities Service alone (excluding all of the excavation records and notes) consists of over 250 individual documents. It provides a wealth of knowledge into the lives of excavators at the time and the negotiations that took place between government officials and academic researchers. My job this summer was to investigate the archive in order to inventory and organize the paperwork as well as to select interesting documents to share with the public in the "Excavation Story" section of the upcoming 'Ancient Nubia Now' exhibit.

Reisner's Application to Excavate in Sudan

One of the highlights of this summer's work was locating a copy of Reisner's initial application to excavate in the Sudan (dated December 17th, 1912). His plan at the time was to conduct an archaeological survey of a large area of the Nile valley in the Sudan, to assess where excavation was necessary (and most promising to build the museum's collection). However, the Harvard-Boston Expedition's plans were slightly altered. In February of 1913, a team of American archaeologists and their Egyptian and Sudanese colleagues began excavating the site of Kerma, which was threatened to be flooded due to agricultural development. That season's work was the start of a long partnership between the Harvard-Boston Expedition and the Sudan Antiquities Service.

Another interesting set of documents within the archive are the original division's lists signed by Reisner and the Sudan Antiquities Service authorities. These are an insightful look into the negotiations that took place into equally dividing the share of artifacts excavated by archaeological expeditions at the time (a practice that no longer exists in either Egypt or Sudan). While sorting these documents, I came across the division's list for Kerma from 1913. This document represents the MFA's first acquisition of Nubian artifacts- the humble beginnings of the largest collection of ancient Nubian art and artifacts outside of Khartoum. Some of the items that were given to the MFA in 1913 will be on display in "Ancient Nubia Now," and include: a sandstone ceiling fragment with faience inlays (13.4360.1), Kerma black-topped pottery (such as: 13.4080, 13.4076, 13.4102), and ivory furniture inlays (13.4219f, 13.4220e, 13.4221e).

Notes and Doodles in the Margins

While exploring the archive, every once in awhile within the margins of diaries or on pieces of scratch paper I would come across notes and to-do lists. One in particular I found to be entertaining, since it was relatable to my own experiences out in the field as an archaeologist. On an undated scrap of paper, Reisner wrote a reminder to send a telegram (presumably back to Cairo or Khartoum) to get more supplies for the expedition, including tooth-powder and toilet paper! It is easy to forget that the "giants of Egyptology" were people too, but archival material like this helps to make them a little bit more relatable.

Another humorous discovery was a doodle I found while looking through the archive of excavation diaries. The diary comes from the Expedition's 1923 season at Begarawiya (the pyramid field near Meroë). The author of the diary was Dows Dunham, so presumably he was the one to draw the doodle on the cover (he was known to have a good sense of humor). Underneath the title, on the left side, you can just see the outline of a skeleton laying on its back, and next to this is a skeleton sitting on a hillside and looking into a mirror. This was reassuring for me as an archaeologist to know that even in the 1920's excavators could have some fun while out in the field!

The archive from the MFA's excavations in the Sudan contains a large amount of correspondence and excavation diaries written in Arabic, a majority which was authored by the Egyptian reis (head supervisor) Said Ahmed Said. These documents are a potential treasure trove of information on excavation life from the point of view of the Egyptian team working with Reisner, and many are still not translated into English. During the summer, my colleague Jason Silvestri and I spent time working with the Arabic archive, mostly sorting and conducting an inventory, but also translating when we came across documents of interest. An Arabic excavation diary from the cemetery site of Nuri will be featured in the upcoming exhibit, showing the public that the Expedition's Egyptian colleagues were trained in archaeological methods of excavation and recording as well.

A final document worth highlighting is a letter addressed to the director of the MFA, Boston in 1922. Reisner wrote this document after the division of artifacts from the Expedition's excavations earlier that year at the necropolis of Meroë. This archaeological site proved to be one of the more fruitful areas to excavate for the team, due to the volume and quality of objects recovered from the numerous pyramids and royal burials in the cemetery. Reisner understood that this was a particularly good year for the museum, and informed the MFA's director that:

"The objects which have been seen by most of the archaeologists have excited general admiration and not a little ill-concealed envy. It is agreed that we had an unusually 'lucky' year last winter (1921-1922)."

Indeed, even today these artifacts are admirable pieces of ancient craftsmanship and ingenuity.  Some of the objects mentioned in this letter will be on display in the fall, including a Hellenistic silver goblet (24.971), a statue head of the god Dionysus (24.957), and elaborate pieces of Meroitic jewelry (like 23.376 and 23.340).

As this project came to an end, it became clear to me that the archive of correspondence with the Sudan Antiquities Service at the MFA holds as much potential and unexpected treasures as an archaeological excavation. Though not as glamorous or stunning as some of the objects that will be displayed in "Ancient Nubia Now," the untold and forgotten stories from the archive provide insight into the lives and work of the Harvard-Boston Expedition in the Sudan. 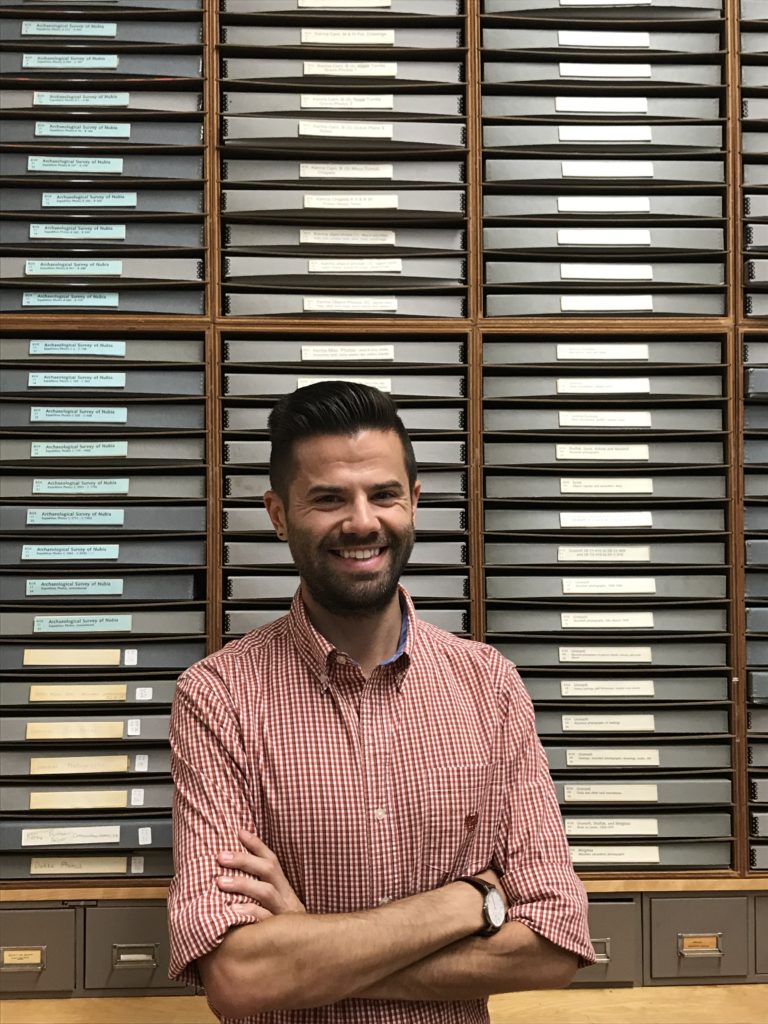 By "excavating" this fascinating collection of documents, it is possible to provide context to an object's ongoing narrative, add new information to the story of an excavator's life, or learn more about the history of the MFA's archaeological work within the Sudan. Every day I discovered new documents that could stir up feelings of excitement, intrigue, or amusement: whether it was the Expedition's initial application to work in the Sudan, an excavation diary written in Arabic, or a reminder to purchase toilet paper for the upcoming field season! As an archaeologist coming into contact with these documents, it is easy to understand Reisner when he said "It is the unexpected that brings joy."

Looking forward to seeing "Ancient Nubia Now," but cannot wait until it opens on October 13th? In the meantime, take a look at some of these publications to learn more about the MFA's collection of Nubian artifacts, as well as the history of archaeological research within the Sudan:

Nicholas Brown is an American Egyptologist who has worked as an archaeologist in Egypt since 2011. He received his MA degree in Egyptology from the American University in Cairo in 2016, and currently is an Egyptology PhD student at the University of California, Los Angeles. Over the summer of 2019, Nicholas worked as an Intern for the Art of Ancient Egypt, Nubia and the Near East Department at the Museum of Fine Arts, Boston.