Archaeological exhibition, 2 cemeteries to be opened in Luxor - Egypt Today 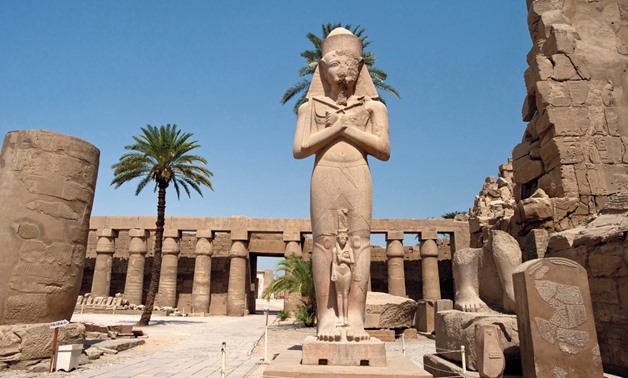 Photograph of the Temple of Luxor in Egypt, July 28, 2016 – Wikimedia/AdaVegas Travel

Archaeological exhibition, 2 cemeteries to be opened in Luxor


CAIRO - 5 September 2019: The Egyptian Ministry of Antiquities is preparing to open a temporary exhibition at Luxor Museum early next week, in conjunction with the opening of two archaeological tombs after the completion of their restoration.

The Ministry of Antiquities invited local and foreign media outlets to participate in the opening of the exhibition.

However, sources in the Ministry of Antiquities told the press that the exhibition will include a collection of antiquities discovered in the region of Assasif, where a number of archaeological discoveries have been made recently.

In 2018, the Egyptian-American archaeological mission in the Assasif region held a similar exhibition to display the findings of the mission's excavations in the region, which included the canopic pots of Lady Aminardis, which were used for mummification.

The Assasif area is located on the western mainland of Luxor, close to the Temple of Hatshepsut at Deir el-Bahari, South of Draa Abul Naga cemetery within the group of Thebes cemeteries.

According to the official website of the Egyptian Ministry of Antiquities, Assasif cemetery includes a collection of individual graves, most of which date back to the 18th, 25th and 26th Dynasties. Moreover, some tombs spanning back to the 5th Dynasty were discovered, and the area was used as a royal cemetery in the second half of the 11th Dynasty.

Most recently, an archaeological cemetery to a person named Thao Orkhet F, and the original entrance of cemetery number TT28 have been discovered in the region.

Found on the walls of the tomb were inscriptions of some family members, including the wife of the cemetery owner, Ta-Kharo or Sekhmet-Nefert, who was a chanter for Amun.

The cemetery contained two wooden coffins. One of them was for a person named Ba-de-Est, son of Nes-Ba-Roti. The second coffin was for a woman called Ness-Mut-Ankhi, who is also a chanter for Amun.

The cemetery also contained two statues made of wood, in addition to a thousand Ushabtis made of Alvians, wood and burned clay. Additionally, 5 colored wooden masks were discovered in the cemetery, in addition to two canopies made of limestone, an alabaster vessel, remains of human bones, and part of a papyrus with Chapter 125 of the Book of the Dead.

Furthermore, the joint mission between the French Institute of Oriental Archeology and the University of Strasbourg, which works on the western mainland around the cemetery Beta Menop in the northern region of the Assasif cemetery, found a sandstone painting, and two wooden coffins dating back to the 17th and 18th dynasties. One of the coffins was opened for journalists to observe the mummy inside.

In June 2018, the Egyptian-American joint Mission in the South Assasif Cemetery Restoration Project unveiled a set of canopies of alabaster at the Karabskin Cemetery (TT391), with lids in various forms including human, monkey, falcon and jackal.