NEW YORK (Reuters) - The gilded coffin of a high-ranking ancient Egyptian priest, which had been buried, looted and illegally sold before going on public display at a New York museum, was returned on Wednesday to Egyptian authorities. 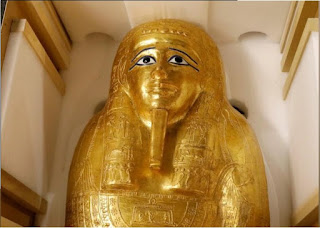 The Gold Coffin of Nedjemankh is displayed during a news conference to announce its return the the people of Egypt in New York City, U.S., September 25, 2019. REUTERS/Brendan McDermid

The coffin of Nedjemankh, which dates back to the first century B.C., came to New York two years ago by way of a global art underground network before being sold to an unwitting Metropolitan Museum of Art for $4 million, authorities said.

"Thus far our investigation has determined that this coffin is just one of hundreds of antiquities stolen by the same multinational trafficking ring," Manhattan District Attorney Cyrus Vance said at a repatriation ceremony.

"So, you may well see a few more significant seizures," he added.

Vance credited his office's two-year-old Antiquities Trafficking Unit with untangling a web of forged documents to track down the coffin's true origin.

The unit focuses on the high-powered New York art world, with its museums, galleries and auction houses, much the same as the Federal Bureau of Investigation's Art Crime Team does on a national scale.

The highly ornamented coffin had been buried in Egypt for 2,000 years before it was stolen from the country's Minya region after the political upheaval of October 2011, authorities said. From there, it went on an underworld odyssey through the United Arab Emirates, Germany, France and New York, they said.

After it had been on display for six months, agents for the district attorney's office presented the Metropolitan Museum with evidence early this year that its ownership history documents, including one that suggested the coffin had been exported from Egypt in 1971, were forgeries.

The museum announced last February that it had been defrauded when it bought the coffin and was cooperating with the district attorney's investigation.

The coffin, which is inscribed with the name Nedjemankh, a priest of the ram-headed god Heryshef of Herakleopolis, will now go back to Egypt where it will be put on display next year, Egyptian Minister of Foreign Affairs Sameh Hassan Shoukry said.

"This is not only for Egyptians but this is for our common human heritage and our sense that we all share in the values and we all are one of the same international family," Shoukry said at the repatriation ceremony.