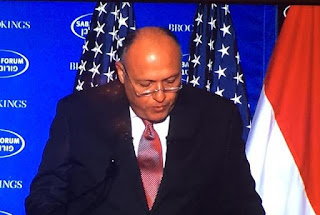 Egyptian Foreign Minister Sameh Shoukry has held several meetings since his visit to the United States began on Wednesday, and more are expected to follow. Shoukry's visit comes a month prior to the inauguration of president-elect Donald Trump in an attempt to warm up relations that have been strained over the past few years.

Shoukry began his visit with a meeting with vice president-elect Mike Pence on Wednesday, marking the first meeting between Pence and an Arab official, according to a statement issued by the Foreign Ministry.

Shoukry relayed a message from Egypt's President Abdel Fattah Al-Sisi to Pence and Trump, in which Al-Sisi stressed on the depth of bilateral relations between Egypt and the US. Al-Sisi also added that Egypt aspires to enhance cooperation with the US under a Trump administration. The Egyptian president concluded his message by saying that the US can rely on Egypt as a partner that seeks stability and actively contributes to finding solutions to the current turmoil in several countries in the Middle East, in addition to combating terrorism in the region.

During the meeting, Shoukry explained in detail Egypt's economic reform programme, in addition to the ongoing economic and social challenges Egypt is facing.

Pence is a conservative Republican who began his political career as a congressman and then as Indiana state governor. Pence has publicly attacked the LGBT (lesbian, gay, bisexual, and transgender) community. The controversial vice president-elect has also refused to receive Syrian refugees in his state and previously released a video disclosing his unconditional support for Israel.

Shoukry also met with US secretary of state John Kerry on Wednesday for extended discussions. The official spokesperson of the Foreign Ministry, Ahmed Abou Zaid, said that Shoukry and Kerry touched upon several regional issues, including Libya, Syria, Iraq, and the Palestinian conflict.

Shoukry also informed Kerry of Egypt's economic reform programme, elaborating on Egypt's seriousness in facing economic challenges and solving them in light of the recent measures undertaken by Egypt.

During the meeting, Shoukry also outlined Egypt's full vision on the current crises in the Middle East, suggesting solutions to the current turmoil in Libya that are represented in the Skhirat agreement that was signed in December 2015. A Government of National Accord (GNA) and a presidential council were formed as a result of the agreement.

Shoukry also cited the importance of intervention by the international community to provide the Syrian people with humanitarian aid, as well as the importance of differentiating between opposition forces and terrorists.

The foreign minister concluded his meeting with his counterpart by expressing his support for the French initiative that was suggested during the International Peace Conference regarding the Palestinian conflict, highlighting the importance of resuming negotiations between the Palestinians and Israelis.

The meeting between Shoukry and Kerry also witnessed the signing of a memorandum of understanding concerning restrictions to be imposed on the illegal smuggling of Egyptian antiquities.

On Thursday, Shoukry held discussions with leaders from the US congress, and provided a detailed vision on the social, economic, and political developments in Egypt. He further discussed the recent economic measures undertaken by Egypt that indicate its steady step to restructuring its economy.

Shoukry further presented an overview regarding the security threats that Egypt is facing and the measures being implemented to combat terrorism in Sinai. The Egyptian foreign minister also discussed the democratic transition in Egypt and the role of non-governmental organisations (NGOs) in that regard and the legal framework within which these organisations operate. He also stressed on Egypt's support for civil society and the role it plays in Egypt's development programmes.

Egypt recently passed a new NGO Law that would govern civil society under a new set of rules and regulations. The legislation was heavily criticised by activists and the international community for the restrictions it will impose on NGOs.

During his visit at the Egyptian Embassy in Washington DC, Shoukry attended and event for the repatriation of four Egyptian artefacts that were smuggled to the US.

Shoukry's visit to the US is the first from an Egyptian official following the election of Trump earlier in November. Many analysts expected the bilateral relations between Egypt and the US to flourish under Trump administration. Al-Sisi was reportedly the first foreign dignitary to congratulate Trump on his win in the US presidential elections.