The minister will inaugurate Monday an exhibition to mark Luxor Museum's 41st anniversary, but the celebration to follow has been cancelled after Coptic Cathedral bombing 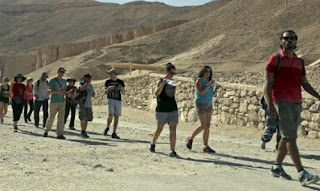 Tourists visit the Valley of the Kings, in Luxor, Egypt (File photo: Reuters)

Egyptian Minister of Antiquities Khaled El-Enany will inaugurate a temporary exhibition to mark the 41st anniversary of Luxor Museum on Monday but the planned celebration afterwards has been cancelled after Sunday's bombing at the Coptic Cathedral in Cairo.

El-Enany condemned recent terrorist attacks, including an explosion this morning at the St Mark Cathedral in Abbasiya that killed at least 25 people, as well as Friday's attack targeting police safeguarding a mosque in Giza's Haram district.

"Both attacks are criminal acts that violate the principles of all religions and moral values in targeting innocents and soldiers protecting the nation," El-Enany told Ahram Online.

He expressed his condolences to Egypt’s Coptic Pope Tawadros II, the ministers of defence and interior, as well as the families of the victims and all the Egyptian people.

El-Enany cancelled the celebration marking the 41st anniversary of Luxor Museum, but the temporary exhibition, in planning for several months ago, will open as scheduled. The minister will also inspect several archaeological sites in Luxor.

Elham Salah, head of the Ministry of Antiquities' Museums Department, said that the exhibition is to last 60 days and put on show a collection of 40 ancient Egyptian artefacts that were unearthed at King Amenhotep III Temple on Luxor's west bank.

Houring Sourouzian, director of the Conservation Mission of the Amenhotep III Temple Project, said that among the most important objects on show are the seated double life-sized statue of King Amenhotep III discovered during excavation work carried out in 2009 at the entrance of the Great Peristyle Court of the temple, and the red granite fragment depicting a scene showing a Nubian prisoner.

The exhibition will also feature a collection of amulets, stelae, scarabs and remains of clay vessels of different sizes and shapes.

Luxor Museum was originally opened to pubic in 1976 and was subsequently developed and enlarged twice, in 1989 and 2003.

It is an air-conditioned museum on two levels and is designed to create individual vistas at strategic positions to encourage an organised, uninterrupted flow of visitors.