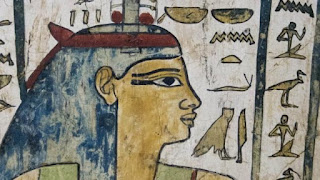 Technology allowed us to learn more about Ancient Egypt and the process of mummification.

SCIENTISTS have used cutting-edge technology to gain a unique insight into the everyday lives of ancient Egyptians.

Using 3D CT scan visualisations researchers were able to examine six mummies who lived and died in Egypt between 1800 and 3000 years ago, while preserving their original condition.

"Part of the process was using a dual energy standing x-ray that rotates around and slices through the body," she told news.com.au

"This is then put through rendering software, which stitches all the data together."

"Ancient Egyptians thought if the deceased were represented as young and beautiful, that's how they would appear in the afterlife," she said.

"Even though we have been separated by thousands of years, with CT scanning opening a whole new way of looking and understating the mummies, we have been able to better identify the true age, sex, state of health and identity of each mummy." 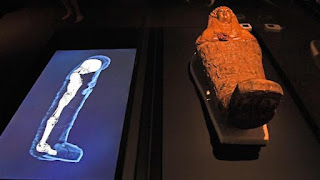 A three-dimensional image of a CT scan of an Egyptian mummy is projected beside a sarcophagus as the hidden secrets of Egyptian mummies up to 3000 years old have been virtually unwrapped and reconstructed for the first time using cutting-edge scanning technology. Picture: AFP/William WestSource:AFP

WHO ARE THE MUMMIES?

Nestawedjat was a married woman belonging to a wealthy family from Thebes, a major religious centre in ancient Egypt. Her carefully mummified body is an excellent example of ancient Egyptian mummification.

A priest from the town of Akhmim, situated about 200km north of Thebes (modern Luxor). Several amulets were placed on his body to protect him and ensure rebirth in the afterlife. His gilt mask is gold which was thought to symbolise the skin of the gods. CT scans reveal Irthorru's dental health was very poor, with several missing teeth.

Daughter of Khonsumose, a priest of the god Amun, king of the gods. Tamut was from a high-status family and was buried with many amulets and other ritual trappings believed to have magical powers that would protect the deceased and help her to gain immortality. CT scans also

show she has plaque in her arteries and suffered from atherosclerosis.

Although we do not know her name, the inscription on this woman's cartonnage case tells us that she was a priestess — more precisely a Singer of the Interior of Amun. CT scans reveal that a few amulets were found inside her abdomen and numerous small pellets — probably gold — were scattered on her body.

• A young child from the Roman Period

In ancient Egypt few children appear to have been mummified. CT scans confirm that the boy was around two years old. His spine and ribs were damaged, possibly during mummification, but his body was wrapped with great care and placed in a gilt and finely decorated cartonnage.

• A young man from Roman Egypt

Mummification continued to be practised when Roman rulers took over Egypt in 30BC but the techniques evolved. One major innovation was "mummy portraits" on wooden. This mummy of a man with his lifelike portrait was among the first mummies with such an image to reach Europe. 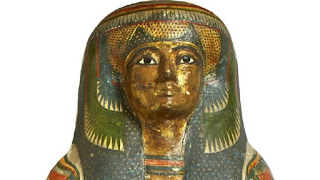 The Museum of Applied Arts and Sciences and the British Museum teamed up to bring the six mummies to Australia.

More information can be found here.