Nefertari's mummy was ripped to pieces and tossed around by the ancient robbers, but scientists say they've now likely identified her legs.

A pair of unimpressive mummified legs on display in an Italian museum may belong to one of antiquity's most beautiful women, according to an international team of researchers who have analyzed the more than 3,200-year-old remains for the first time.

Consisting of fragmented thigh bones, kneecap and a proximal tibia part (the upper portion of the bone where it widens to help form the knee joint), the body parts are likely those of Queen Nefertari.

Not to be confused with Nefertiti, who lived one Dynasty earlier, Nefertari was the first and favorite wife of the mighty warrior pharaoh Ramses II, who reigned between 1290-1224 BC during the early 19th Dynasty.

"She is the only queen from the Ramesside era to have been likely identified so far," Egyptologist Michael Habicht at the Institute of Evolutionary Medicine, University of Zurich, Switzerland, told Seeker.

The study, detailed in the journal PLOS ONE, indicates the ancient Egyptian beauty was very slim and tall. The information helps reconstruct the life of one of the most intriguing figures of ancient Egypt.

"Nefertari is one of the truly great and important queens of Egypt and plays in the league of Hatshepsut, Nefertiti and Cleopatra," Habicht said. 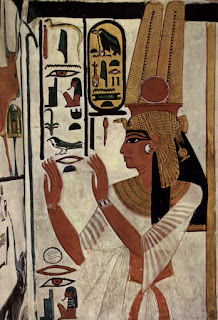 Known for the impressive wall paintings of her lavishly decorated tomb in the Valley of the Queens, which depict her timeless beauty in unusually lifelike form, Nefertari was highly educated and played an active role in foreign politics.

However, little is known about her demise.

"We know that she gave birth to four sons and four daughters and that she attended the opening ceremony of the rock-cut temples of Abu Simbel in the year 24 of Ramses II's reign. After that event, she disappeared from history," Habicht said.

Egyptologists estimate she probably died around her husband's 25th year of reign, having reached an age of about 40 to 50 years.

Nefertari's tomb, known as QV66, was heavily plundered in antiquity and her mummy was ripped to pieces and tossed around by the ancient robbers.

When Italian diplomat and archaeologist Ernesto Schiaparelli opened the queen's burial in 1904, he found a series of broken remains, including fragments of the pink granite sarcophagus that once held Nefertari's mummy, a pair of sandals and two fragmented mummified legs.

Housed at the Egyptian Museum in Turin, Italy, the remains have now been investigated in a multidisciplinary study.

"Although no absolute certainty exists, the results speak in favor of an identification of the remains as Nefertari's," lead author Frank Rühli, head of the Institute of Evolutionary Medicine at the University of Zurich in Switzerland, told Seeker.

RELATED: Weird Facts About King Tut and His Mummy

Anthropometric reconstruction and assessment of the size of the knees revealed they belonged to a woman whose stature ranged between 165 cm (5 foot 5 inches) and 168 cm (5 foot 6 inches).

The body height was also independently estimated by professor Maciej Henneberg at the University of Adelaide, Australia, who obtained the same results — a stature of about 165 cm.

"Data about women from the New Kingdom and 3rd Intermediate Period show she was probably taller than 84 percent of the women of her time," Rühli said.

Analysis of the materials used for embalming showed they were consistent with Ramesside mummification traditions, while X-rays of the left knee pointed to possible traces of arteriosclerosis, suggesting the legs belonged to an elderly person.

"The accumulated evidence could point to an individual between 40 and 60 years old," Rühli and colleagues wrote.

The mystery over the mummified legs, however, is not completely solved. The authors admit the identification can't be done with absolute certainty as some analysis failed. Moreover, QV66 is not an original undisturbed burial situation.

DNA testing was inconclusive since the samples turned to be contaminated and not suitable for analysis, while radiocarbon dating of the remains yielded odd results — the remains would predate the assumed lifespan of Queen Nefertari's by some 200 years.

"A discrepancy between radiocarbon dating and Egyptian chronology models has long been debated. Indeed, some question on the chronological model of the New Kingdom may now arise," Habicht said.

"For the future, we strongly suggest radiocarbon dating of other royal and non-royal remains of the Ramesside era, in order to validate or disprove the chronology," he added.

Nefertari's tomb also contained a pair of sandals made of vegetal material — grass, palm leaf and papyrus — in a style typical of the 18th-19th Dynasties.

According to the researchers, the fine quality and shape of the sandals suggest they were royal footwear.

They estimated the shoe size to be 39-40 (US size 9), fit an individual of Nefertari's stature.

André Veldmeijer, visiting research scholar at the American University in Cairo, agrees on the sandal' size.

"The area of the foot, if the sandal would fit neatly, would reach slightly beyond the front strap, say about 24-25 cm (9.4-9.5 inches) This would indeed result in size somewhere 39 to 40," Veldmeijer, an authority on ancient footwear, told Seeker.

RELATED: Mystery Mummies: Who Are They? Photos

He noted, however, that is not certain the sandals would fit exactly.

"For example, the footwear from King Tut's tomb fall in two sizes without intermediate size. So, it seems that footwear was not really made to fit," Veldmeijer said.

Rühli and colleagues examined the possibility that remains from a burial of the 17th or 18th Dynasty were washed in the tomb after it was open. However, tomb QV66 is on higher ground at the side of the Valley of the Queens, while the burials from the 17th and 18th Dynasty are mostly at the bottom of the valley.

"Mudslide and heavy rains would have washed remains out of the valley but unlikely upwards and towards the end of the valley," the researchers noted.

"The most likely scenario is that the mummified knees truly belong to Queen Nefertari. We have the fact that the remains were found in her tomb, together with objects naming her alone and no one else," Habicht said.