Ancient Egyptian doctor returns to Hearst Museum, all three tons of him

The three-ton lid of the coffin of an ancient Egyptian doctor has been carefully removed from storage and maneuvered into a new resting place at the Phoebe A. Hearst Museum of Anthropology’s newly renovated gallery in Kroeber Hall at UC Berkeley. 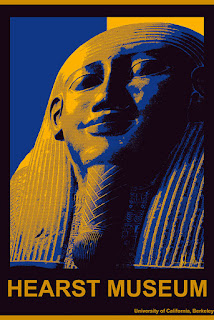 When the museum reopens to the public in April 2017, visitors will find the “Doctor” near the entrance, where he will command a spotlight for years to come.

Made of volcanic basalt, the physician’s sarcophagus lid is the heaviest and one of the most impressive of all the Hearst Museum’s 3.8 million objects, which span 2 million years of history around the world.

Museum Director Benjamin Porter, also an archaeology professor in Near Eastern studies, said trying to tell the stories of the Hearst’s massive and diverse collection in its modestly sized, 5,300-square-foot space at Kroeber Hall has pushed its staff to come up with bold, new approaches — as the Doctor’s presence attests.

“It is a career highlight for me to bring the Doctor to campus to christen the Kroeber gallery project,” said Porter.

The Hearst Museum raised $30,000 in a crowdfunding operation to cover expenses of transporting the Doctor from storage and installing him on a specially built display mount. The fundraising also paid for design and production of an annotated 3D model to let visitors more closely examine all the coffin’s surfaces and inscriptions.

The 2,500-year-old object was made to enclose the body of a chief physician by the name of Psamtik. Researchers say the Doctor died around the middle of the sixth century and his body was never recovered. The lid covering his empty coffin is replete with hieroglyphic spells that ask 15 different gods to remember Psamtik and protect him from enemies in his afterlife. 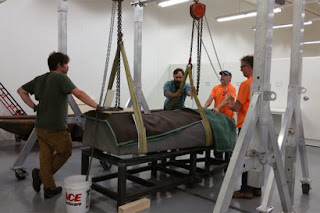 The Hearst Museum moving crew had some heavy lifting to do when transferring the Doctor from storage to the Kroeber Hall museum. (Photo courtesy of the Phoebe A. Hearst Museum of Anthropology)

The lid was excavated from a small, non-royal burial chamber found south of the Pyramid of the Pharaoh Unas in 1899. William Randolph Hearst bought it on a trip to Luxor, Egypt, and donated it to the then-new University of California Anthropology Museum, which had been recently founded by his mother, Phoebe Apperson Hearst. It arrived on campus in 1903.

Over the years, the piece has been occasionally displayed, often kept in storage and frequently studied. 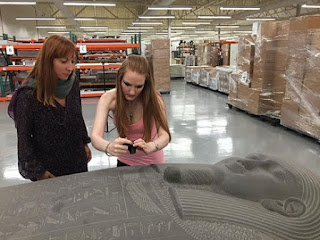 Rita Lucarelli, left, has been studying the doctor in connection with her work on how the Book of the Dead is connected to various artifacts. (Photo courtesy of the Phoebe A. Hearst Museum of Anthropology)

“The object is decorated with a peculiar text, not fully attested on other funerary objects from ancient Egypt,” said Lucarelli. “The text on the coffin lid is a special mix of magic spells and figures of gods. Our study of the object is advancing our knowledge of ancient Egyptian funerary religion at the end of the Pharaonic Period.”

The last time the Doctor was publicly exhibited was in 1995 at the Los Angeles County Museum of Art, where William Randolph Hearst was a longtime benefactor.

The entire renovation project cost $2.1 million, raised from a variety of sources, including the Hearst Foundations, the Koret Foundation and The Frank H. and Eva B. Buck Foundation.

The Hearst Museum is in Kroeber Hall, on the north side of Bancroft Way near College Avenue. Follow Berkeley News and check the museum website for the date and details about the official reopening in April.