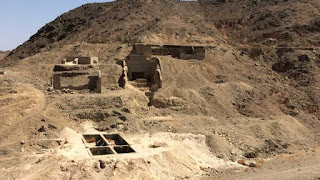 The Abu Marawat concession area has a history of mining dating back to Ancient Egypt through Ptolemaic, Roman and Early Arab times. Credit: Aton Resources.

When Egyptian President Gamal Abdel Nasser stood on the steps of the Alexandria Stock Exchange in July 1956 and declared that he was going to nationalize the Suez Canal, a young geology student at Alexandria University by the name of Sami El-Raghy decided to pursue his career elsewhere.

The geologist emigrated to Australia in the 1960s, arriving just in time for the nickel boom, and worked for companies like Asarco and Chevron Minerals. He also built a company called Normandy Mining, before buying a moribund miner called Centamin, which had a couple of projects in Western Australia, and listed on the ASX in 1970.

El-Raghy was looking for new properties that he could fold into Centamin’s portfolio when, during a trip home to Egypt to visit his mother, he had dinner with one of his old geology professors, who advised him to look for projects in Egypt. The young geologist began his search at the Egyptian Geological Survey and Mining Authority, one of the oldest of its kind in the world. 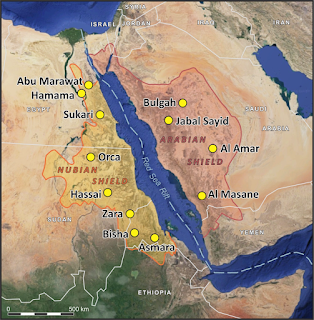 A map of the Arabian Nubian Shield. Credit: Aton Resources.

“They just couldn’t believe it. No one had come to see them in years, so it was like Christmas for them and they said, ‘Here’s what we’ve got. What do you want,’” recalls Mark Campbell, one of the early consultants to Centamin Plc (TSX: CEE; LSE: CEY) through its Egyptian subsidiary, Pharoh Gold Mines, and now president and CEO of Aton Resources (TSXV: AAN). “He realized it was a geological Disney World.”

El-Raghy picked up a titanium mineral sands project, a concession in the Eastern Desert’s Arabian Nubian Shield called Sukari (which means Sugar in English and is now Centamin’s flagship mine) and a number of other properties, including a concession called Abu Marawat, about 250 km to the north of Sukari and now owned by Aton Resources.

“I knew this ground years ago,” says Campbell, who studied petroleum geology at Texas Tech University and has spent most of his career in the oil and gas industry. “Although I don’t have a background in hard rock geology, I knew enough to know that what Sami was talking about was right geologically, so I’ve always been interested in this property.”

At the time Centamin picked up the Abu Marawat concession in the 1990s, the most recent exploration on the property had taken place in the 1980s by a company called Minex. The concession, about 400 km southeast of Cairo, had a couple of old British mines on it as well as numerous ancient workings.

El-Raghy started exploring Sukari first because there was better infrastructure in the area, but Abu Marawat was always his favourite concession, Campbell says, and he always intended to return to it. After declaring a commercial discovery at Sukari, however, the Egyptian government insisted that Centamin relinquish some of its other concessions, including Abu Marawat.

“In that period of time the Egyptians thought we were either crazy or crooks or both — they just assumed all the gold was gone — that the Pharaohs had got it all,” Campbell says. “So there was nobody more surprised than the government when Centamin discovered it.”

Centamin’s loss was Aton Resources’ gain. The company, formerly known as Alexander Nubia and renamed Aton Resources in June this year, picked up the concession through a formal bidding process in 2006, and has been busy exploring it ever since.

“I’ve known about Abu Marawat for twenty years and I still believe it’s the best concession area in Egypt, and has the most potential, because Sami told me, basically, and I believe in Sami,” says Campbell, who joined the company’s board in 2009 and was named CEO in 2015. “He is probably one of the best conceptual geologists you’ll ever know … Centamin has been wildly successful. Sukari is a fantastic deposit … It’s a barn burner.” 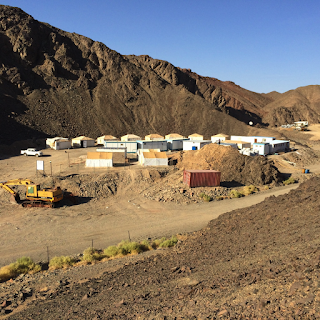 So far, Aton has identified a 40-km-long gold trend at Abu Marawat, anchored by the Hamama project at the western end and the Abu Marawat gold deposit in the east. The trend contains numerous exploration targets.

“Within that 40 sq. km of land I’ve got two old British mines and 15-plus areas that I can show you Roman remains of where they used to work in those areas and it’s astounding,” Campbell says. “Egypt has 6,000 years of mining history, which basically died before WWII, so you haven’t had any mining for the last 80 years. It’s essentially virgin territory.”

Currently the Abu Marawat gold deposit has an inferred resource of 2.9 million tonnes grading 1.75 grams gold per tonne, 29.3 grams silver per tonne, 0.77% copper and 1.15% zinc. The deposit is open at depth and along strike

Hamama consists of three zones, Hamama West, Hamama Central and Hamama East. The mineralized horizon has a strike length of about 3 km and remains open to the west and to the east.

Aton’s most recent exploration efforts at Hamama have focused on Hamama West, where it recently completed 38 diamond drill holes in 3,428 metres. The company plans to complete a maiden resource for Hamama West by the end of this year.

Hamama West has been deeply weathered into a soft, oxidized gossan blanket, or a gold-oxide cap, which is over 900 metres long, up to 110 metres wide, and has an average vertical depth of 35 metres. In addition, sulphide mineralization has been traced up to 180 metres in depth and remains open.

“Hamama was originally formed as a VMS, but it’s not a classic VMS. It’s polymetallic, but we haven’t actually found a lot of copper — silver, zinc, gold, fine, but not a lot of copper,” Campbell says. “We haven’t identified where these massive sulphides are, and because we’re on a tectonic plate boundary, there’s been an enormous amount of activity overlying the original deposit. So it’s slightly overturned.”

As for Abu Marawat, he says, the more the company looks at it, the more it believes that it could possibly have been formed originally as a VMS. But there were a lot of thermal events that occurred that overlaid it, so what looks like an orogenic vein-hosted system may only be a lateral event. About 3-4 km to the south of Abu Marawat, he adds, at a target called Miranda, there is a lot of at-surface copper. “I’m not sure what that tells us, but what it does show is that there has been a lot of geological activity and it’s probably polymetallic,” he continues. “Assuming you don’t get one VMS, but pods of them, it could have been generated by a VMS, so we’re going to go back and drill that.”

The company plans to do more spectral imaging in January, after the dust settles down at that time of the year, and when the best satellite imagery can be taken. The company is also planning more geophysics. 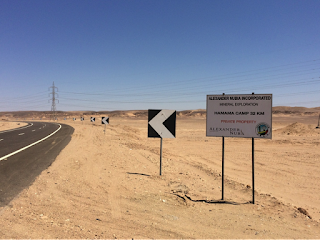 The company, formerly known as Alexander Nubia and renamed Aton Resources in June this year, picked up the concession through a formal bidding process in 2006. Credit: Aton Resources.

“There’s no doubt in my mind that we have bulk mining potential across Hamama and Abu Marawat,” says Campbell, “but you have to back it up with science.”

Aton certainly has a strong exploration team to do it. Rick Cavaney, Aton’s vice president of exploration, spent eight years at Centamin and was one of the original exploration managers at Sukari.

“I have a simple philosophy,” Campbell says, “I hire good people and let them do their job. I don’t have to be a geological genius. They are the geological geniuses. I’m just a traffic cop making sure they go in the right direction.”

Abu Marawat is close to existing infrastructure, including a four-lane highway, a railway line, a 220-kilovolt power line, and a water pipeline, located about 32 km from the property, which runs to the Red Sea.

The massive concession — 738 sq. km in size — is both a blessing and a curse.

“Because Egypt is an oil and gas regime they believe that you have to have these large blocks, which is good for us,” says Campbell, “but it also means we have a lot of work to do.”

Campbell, who is based in Cairo, has worked in the extractive industry for more than 35 years. He founded Rodeo Resources, and is a former president of Texas T Drilling Corp. Currently, he is a director at Raider Petroleum, Blue Heron Resources and Hawkey Oilfield Services.