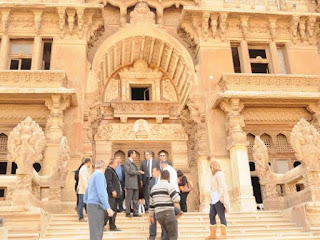 Egypt's Antiquities Minister Khaled al-Anany said Thursday that work started in late November on the Baron Empain Palace of Heliopolis, in preparation for the first phase of reconstruction and architectural restoration of the palace.
Anany visited the palace on Thursday, as well as different historical buildings in Khalifa district, accompanied by the general manager of historical Cairo project Mohamed Abdel Aziz.
Baron Empain came to Egypt from India just after the inauguration of the Suez Canal, and concluded the construction of his palace in 1911.
The palace designer, Alexandre Marcel, a French architect, displayed the design for the palace in an exhibition in Paris. It had appealed to the Baron, who liked the combination of both European and Indian architecture.
Empain had the palace built using Italian marble and Czechoslovakian crystal.
Aziz said that the ministry had prepared the initial perception of ways to intervene in the Khalifa district as a prelude to provide the necessary funding to begin studies and integrated research for the archaeological area and the buildings within it; in light of the state's plan for sustainable development of heritage areas.
He added that the coming period will witness seminars, cultural activities and events within the ancient buildings that were restored. This works to increase communication with the people of this area and to help raise awareness of the value of archaeological sites, ensuring their future cooperation in the preservation of this important heritage.