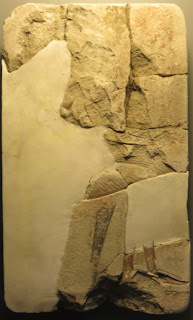 Ancient Egyptian art was governed by a strong sense of decorum – i.e. what was permissible to depict and how it was presented – especially in relation to the Pharaoh. This system changed significantly during the reign of Akhenaten (c. 1352-1336 BC), when new scene-types were introduced. The king, queen and royal family are represented in previously unparalleled moments of intimacy: apparently 'playing' with children, holding hands and even kissing. Such acts would be unthinkable for Senwosret III or Tuthmose III, and were perhaps shocking to an ancient audience – although the impact of visual culture, and the composition of the audience, is difficult to model.

Another activity in which the king is usually never shown partaking is eating and drinking. Egyptian kings present offerings to gods; non-royal people sit impassively in front of heaped offering tables. 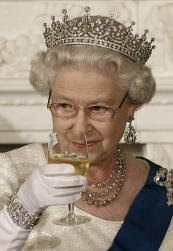 Despite the great importance placed on eternal sustenance, the act of eating itself is conspicuous by its absence. Even mouths – of any
human figure – are almost never shown as open.

In a modern Western context, it is often considered undignified for leaders to be seen consuming food. Queen Elizabeth II is often shown toasting a visiting head of state at a banquet – but she is never pictured eating. Elected politicians are more likely to be compromised when photographed eating because they appear vulnerable – and, consequently, foolish. 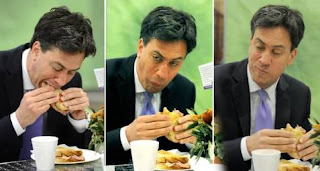 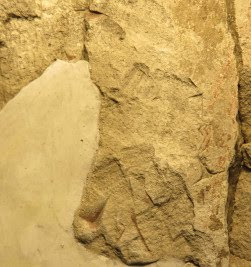 The present object is a reconstructed single limestone plaque (31 x 17cm), rather than a section of relief. It may therefore have been a sculptor's trial piece but may have also had a (secondary?) votive, devotional function at Amarna, where images of the king (and royal family) were key objects of cult. There is no preserved text to identify the figure, who is shown seated and holding a goblet or chalice to his mouth.

The spindly fingers, voluminous kilt and languid (to modern eyes, at least) pose might indicate suggest a depiction of Akhenaten himself – especially as the face of the figure has been deliberately effaced – a fate meted out to images of the king after his death. A close parallel for the pose of the present image occurs in a scene of the royal family 'feasting' from the tomb of Huya at Amarna. 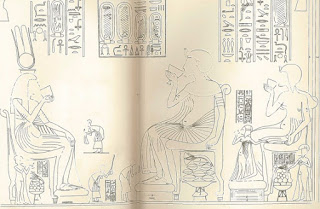 Scene in tomb of Huya at Amarna of royal family 'feast', with drinking figures of Queen Tiye (at left) and Akhenaten and Nefertiti (at right)

In fact, these and other scenes do not actually show the royals consuming anything – their mouths are all closed and their faces are impassive – but about to consume the food and drink they hold. The same restraint occurs in a small plaque – perhaps an instructive parallel to the present piece – showing a princess about to eat a cooked duck. What is 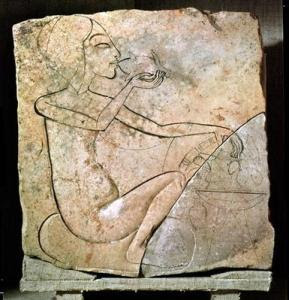 Amarna princess about to consume a duck, Cairo Museum

innovative is that food and drink is shown being the king or royal family at all.

One major problem of interpretation, especially with Amarna Period representation, is that we often impose modern parallels on ancient evidence to describe what is going on; like so-called 'jubilees' and 'durbars', this is not a 'banquet' in a modern sense. It targets other concerns that are not likely to be fully understood by a modern audience.

As Margaret Murray wrote in 1949, Akhenaten "appeals by a mixture of religion and sentiment". In creating the innovative image world of Amarna, artisans had to learn new motifs and scene types. Perhaps this explains the significant number of so-called 'trial pieces' and models found at the site of Amarna. The present piece was perhaps one of many experimental stages in refining the royal image – creating innovative poses, such as the king drinking, attested in tombs of officials like Huya.