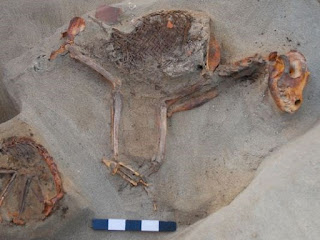 A nearly 2,000-year-old pet cemetery holding the remains of dogs, monkeys and scores of cats has been uncovered in an ancient Egyptian town, archaeologists say.

A few animals still wore iron collars when they were laid to rest, and the graves of two young cats include ostrich-shell beads. Some of the beasts’ bodies were nestled under mats or pottery jars, signaling they were deliberately buried rather than just discarded as trash, researchers argue.

The careful treatment of the animals’ bodies suggests an “emotional (relationship) between men and pets as we know it today,” says Marta Osypińska of the Polish Academy of Sciences, the author of a new study in the journal Antiquity.

It’s not uncommon to find pets buried in ancient Egypt, but most were interred with or near their owners. The only humans buried near these pets were two people buried three centuries after the animals, Osypińska says.

Osypińska and her colleagues stumbled across the pets while excavating a trash dump just outside the ruins of Berenike, an ancient Egyptian port town along the Red Sea. The place was animal-centric from the beginning, originally serving as a way station for African elephants bound for battlefields.

The pet burials date to the first and second centuries A.D., when the town was a busy trading center and the Romans held sway.The Romans loved their pets, especially their dogs, and one grave at Berenike holds a young dog probably imported from either Rome or Greece. A heavily built animal similar to a mastiff, its belly held a final meal of fish and goat meat, and its skeleton shows it suffered from a painful bone cancer still common among dogs today. Its body had been wrapped in a basket and covered with pieces of broken pottery, clear evidence it was “a very loved animal,” says the University of Delaware’s Steven Sidebotham, who directs research at Berenike.

Elsewhere in Egypt, researchers have found vast animal cemeteries, among them a catacomb holding an estimated 8 million mummified dogs. Pilgrims would purchase such mummies as religious offerings, and animals interred at ritual burial grounds may have been bred solely for sacrifice and mummification. So it’s possible Berenike animals were likewise interred for some ritual purpose, says Wim Van Neer of Belgium’s Natural History Institute, who has done research at Berenike in the past.

The burials are “a very nice find,” says Salima Ikram of The American University in Cairo, but she wonders whether some of the animals were considered rubbish, given their location in a trash heap. She also points out that pet ownership is well known from ancient Egypt. Wall paintings depict pet cats, and ancient Egyptians have been found buried with pet dogs, monkeys and even a gazelle.

Osypińska responds the Berenike cats show no signs of having had their necks twisted, unlike the mummified cats buried for ritual reasons. She adds that most of the animals show signs of attentive burial – a deliberately dug grave pit, for example, or careful positioning of the body.

Though the Berenike animals were not the first pets in Egypt, they’re notable because of the conditions in which they were kept, Sidebotham says.

Berenike was “way out on the edge of nowhere,” he says, a site so remote and harsh that most food was imported from hundreds of miles away. “What makes this unique is (despite) the very rough circumstances in which these people are living, they still manage to find the time and effort to have companion animals with them.”