IDSC denies sale of Egyptian antiquities in US - Egypt Independent 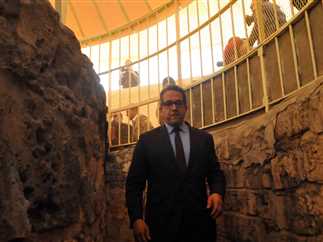 The Egyptian cabinet's Information and Decision Support Center (IDSC) denied rumors circulated on social media websites that 17 Egyptian artifacts were put up for sale in the auction hall "Christie's" in the United States.

The Ministry of Antiquities has completely denied the news, stating that no Egyptian antiquities of any kind were put up for sale in international auctions in the US or any other country, according to the IDSC.

The state is keen to preserve all Egyptian artifacts as they make up the country's cultural heritage. The nation is keen to address any illegal attempt to smuggle antiquities, said the statement, adding that rumors in this regard aimed at provoking and angering public opinion.

As soon as rumors circulated about the sale of 17 Egyptian antiquities at Christie's auction in the US, the General Directorate of Antiquities obtained the catalog of this auction and checked the pieces put up for sale, none of which were shown to be missing Egyptian artifacts.

The General Directorate of Recovered Antiquities announced the recent recovery of more than a thousand artifacts that were smuggled illegally out of Egypt.

The ministry stressed taking all necessary measures to protect antiquities and called on all the media outlets to be careful and accurate before spreading such rumors, which may anger citizens and confuse public opinion.