'It is the biggest 'saff' tomb to be ever discovered in the Theban necropolis,' said a senior official The discovery of a new saff tomb in the Draa Abul Naga necropolis on the West Bank of Luxor was announced by Egyptian officials on Thursday.

"It is the biggest 'saff' tomb to be ever discovered in the Theban necropolis," said Mostafa Waziri, secretary-general of the Supreme Council of Antiquities. Waziri said the discovery was "very important" because it will change the archaeological and historical map of the site as well as providing a new understanding of the architecture and design of individuals' tombs in Draa Abul Naga.

Prime Minister Mostafa Madbouly was at the event where the new discovery was announced, as were a number of other ministers, the governor of Luxor, and several MPs.

Madbouly spoke at the event, saying the discovery showed the greatness of the Egyptians and their unique civilisation.

Minister of Antiquities Khaled El-Enany told Ahram Online that the announcement of the new discovery and the restoration and re-erection of Ramses II's statue at Luxor Temple is "Egypt's gift to the world" on World Heritage Day, which falls on Thursday.

He said that the saff tomb belonged to a holder of the king's funerary cones named Shedsu-Djehuty. The tomb has painted walls with scenes depicting the deceased before the gods and scenes showing daily life, the fabrication of wooden boats, hunting and fishing. Pots and ushabti figurines made of faience, clay and wood were also unearthed, as were canopic jars and an anthropoid cartonage sarcophagus.

Saff tombs are rock-hewn tombs from the 11th dynasty. 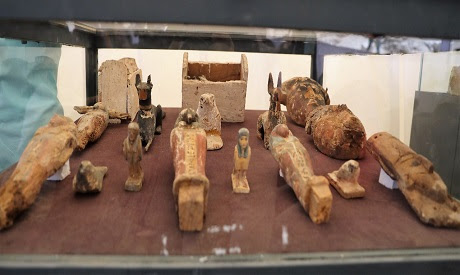