The British Museum --- the problematic yet enduring appeal of Antiquities

The British Museum --- the problematic yet enduring appeal of Antiquities

In London last month, my first stop was to visit the British Museum. Going there seemed an urgent priority. My thinking was that in such turbulent contemporary times, it is reassuring to see the classics of antiquity, those fundaments of Western Civilization that remain. At the same time, given our shifting ethical rationales concerning antiquities, I wanted to see again those British Museum treasures which may, sooner or later, be returned to their countries of origin and explore my feelings about that.

Arriving at the Museum, I made a beeline for the Rosetta Stone. 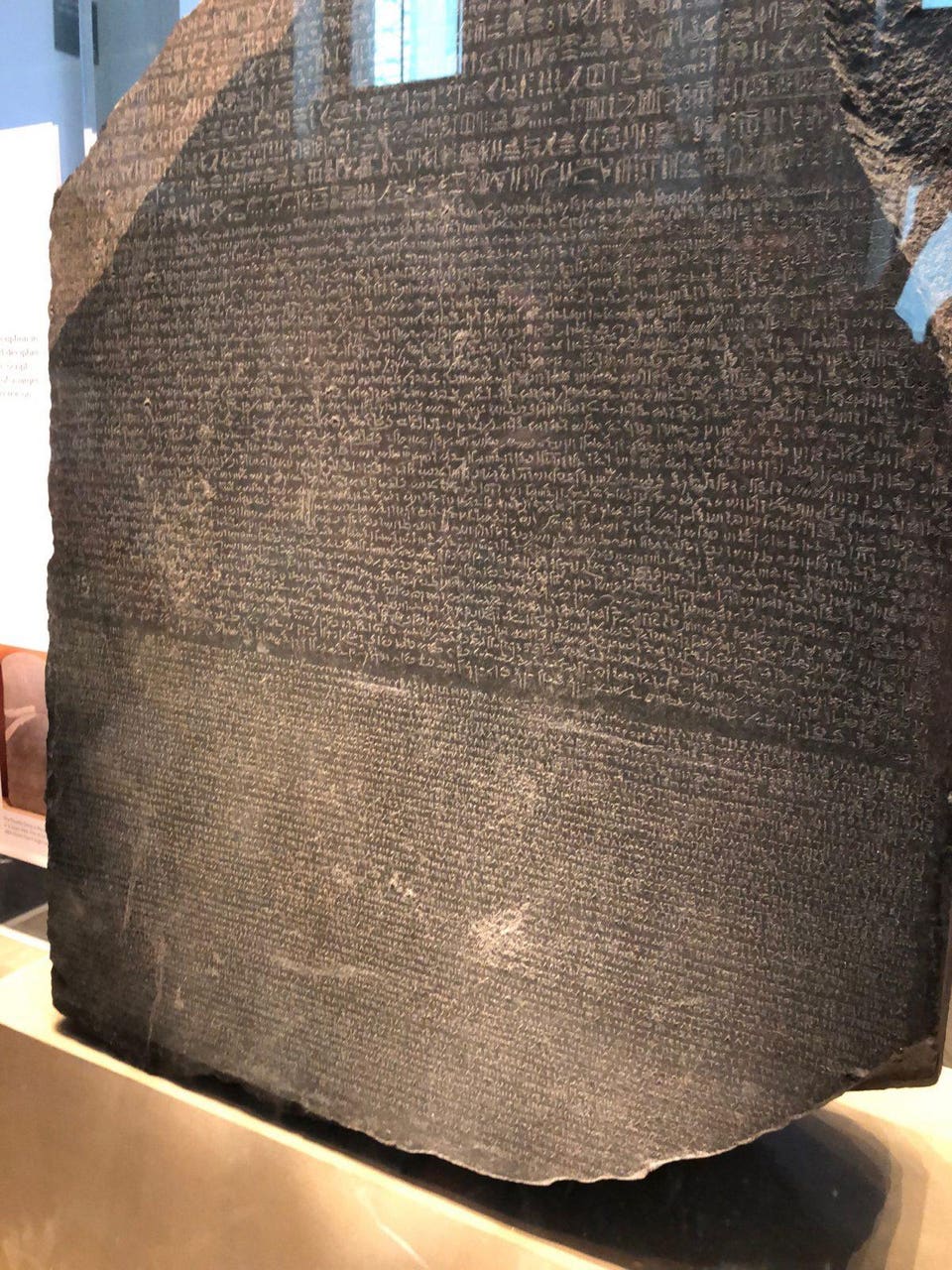 Right of the main entryway and the Norman Foster-designed enclosure for the reading room sits the Rosetta Stone. It is a very dark slab of basalt whose top left corner has been sheared off, and whose front is covered in ancient script. More to the point, it is covered in three ancient scripts, Greek, Demotic (script of an Egyptian spoken language) and Egyptian hieroglyphics.

It is very much the kind of totem that you can imagine inspiring Stanley Kubrick's monolith in 2001. And, when I visited, it was mobbed by a crowd of Chinese tourists taking selfies in front of it.

The reason is simple: The Rosetta Stone is one of those artifacts that doesn't disappoint.  It has a look of significance, yet it does not give up its secrets easily. That is part of its charm.

Today it is believed that the stone, which dates to two hundred years before the common era, was a proclamation and, as such, was one of many similar stones placed in temples for the Egyptian populace to see.  Once its use was no longer needed, the stone was "recycled" – discarded and reclaimed for use in the walls of a fort outside Cairo.

However, in 1798, Napoleon, then a French military leader, led a campaign to conquer Egypt and extend the French Empire to the Middle East. Napoleon, being Napoleon, and France being France, Napoleon's conquest was not purely political, it was also cultural. Napoleon's Army travelled with its own battery of scholars tasked with appropriating whatever cultural treasures they came across. Napoleon even placed a bounty for doing so.

On July 19, 1799, while rebuilding a fort near the town of Rosetta, some 30 miles outside of Cairo, a French soldier Pierre- Francois Bouchard found the irregularly shaped dark stone as part of a wall, and surmising its significance (and his possible reward), alerted his superiors who convinced of its importance alerted Napoleon himself. Napoleon's bragging rights were short-lived.

In 1801, upon Napoleon's defeat, under the terms of the Treaty of Alexandria, the stone became property of the British Empire.      The Rosetta Stone was placed on display in the British Museum in 1802 and has been there ever since (Except during World War One when it was moved for safety to the Holborn subway station underground for protection).

Deciphering the Stone's hieroglyphic text took another two decades and a competition between rivals -- British Scholar Thomas Young and French scholar Jean-Francois Champollion. Young was first to find that some of symbols stood for the sound of Ptolemy's name. Champollion went further, uncovering that hieroglyphics which were thought to be a symbolic language was actually a visual interpertations of the phonetics of Egyptian words. Champollion was able to compile an alphabet of hieroglyphs that allowed Champollion to fully decipher the Stone in 1824.

What is significant is that the same decree – that a cult of priests who venerate the Pharaoh Ptolemy support his regime is listed three times in the three different languages. Until the Rosetta Stone was uncovered no one could decipher Egyptian Hieroglyphics. But now they had a key.

Given that the Rosetta Stone was not a treasured Egyptian icon, and its possession was awarded to Britain by treaty, Britain's claim to the Stone is strong. However, Egypt could request its return as being culturally significant and deserving of a place of honor in a museum of Egyptian archeology in Alexandria or Cairo. More people would see the Stone in London than in Cairo – but if a perfectly rendered 3-D copy were made would I mind that it wasn't the original – I'm not sure I would. 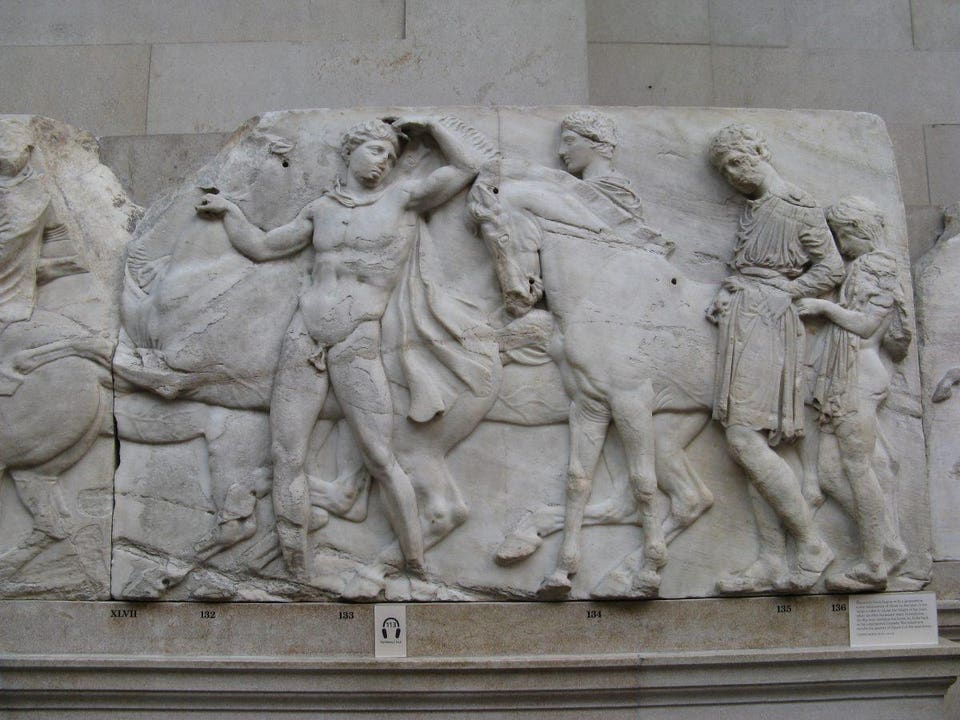 More problematic are the treasures several rooms away in the British Museum. The Elgin Marbles or the Parthenon Marbles as they are also called, are housed in a nearby gallery specially constructed to hold them. They represent a series of sculptures that Thomas Bruce, 7th Earl of Elgin removed from the Parthenon between 1801 and 1812 and represent about half of the Parthenon's marbles.

Lord Elgin claimed that he had acquired the collection with permission of the Ottoman Empire which then ruled Greece but there is no original documentation to support this (there is what purports to be an English translation made of an Italian copy of the purchase receipt at that time). From its arrival, the acquisition of the sculptures was controversial, with public figures such as Lord Byron condemning them as products of cultural pillage.

However, after debate in Britain's Parliament exonerated Elgin, he sold the Marbles to the British government in 1816 who installed the marbles in the British Museum where they reside to this day – despite continued protest from the Greek government. Jeremy Corbyn, the current Labour party leader, no stranger to controversy, has said that he would return the marbles to Greece upon becoming Prime Minister.

The Parthenon Frieze is almost 250 feet long and depicts battles between sons of Apollo, the Lapith warriors and the Centaurs (half men-half horse).

It is hard to describe the effect of the marbles other that being in the presence of such antiquity and the beauty that arises out the human struggle imagined in mythic form builds to the recognition that this is a treasure. Also, the recognition that beauty and the ability to convey it in stone existed several centuries ago, provides a connection through the ages demonstrating that humanity is amazingly the same, despite what sophistication we imagine the present to hold.

However, as to who's treasure it is, and who should be the custodian, I can understand why several hundred years ago England saw itself as a better guardian, or even imagined the ownership of such treasures a spoil of empire, and why it means so much to Greece to have them returned. One can argue that there were times in the last 200 years when the British Museum did a better job of preserving the marbles than if they had been left on the Parthenon – yet the conservation methods used by the British are not without their own faults and consequence.  In absolute numbers, more people would see the marbles in London than in Athens, yet seeing them there (even if they are housed in the Parthenon museum rather than in the Acropolis itself) would be an incomparable experience, and have no small measure of poetic justice.

Regardless, the point is to go see them – that doing so is a profound experience – and that we must continue, one way or another, in one place or another (or in several) to make an encounter with them possible.

I am an award-winning journalist and producer who has created print, video and online media content for Intel, The Museum of Tolerance and The Milken Family Foundation; and my work has appeared on The Huffington Post, Newsweek.com, The NY Times Magazine, Interview Magazine, ...

Tom Teicholz is an award-winning journalist based in Santa Monica, CA and co-host of "The Buried Lede: Beyond the Bylines," a podcast about journalism