King Tut on exhibit as views of antiquities evolve - CSMonitor.com

King Tut on exhibit as views of antiquities evolve 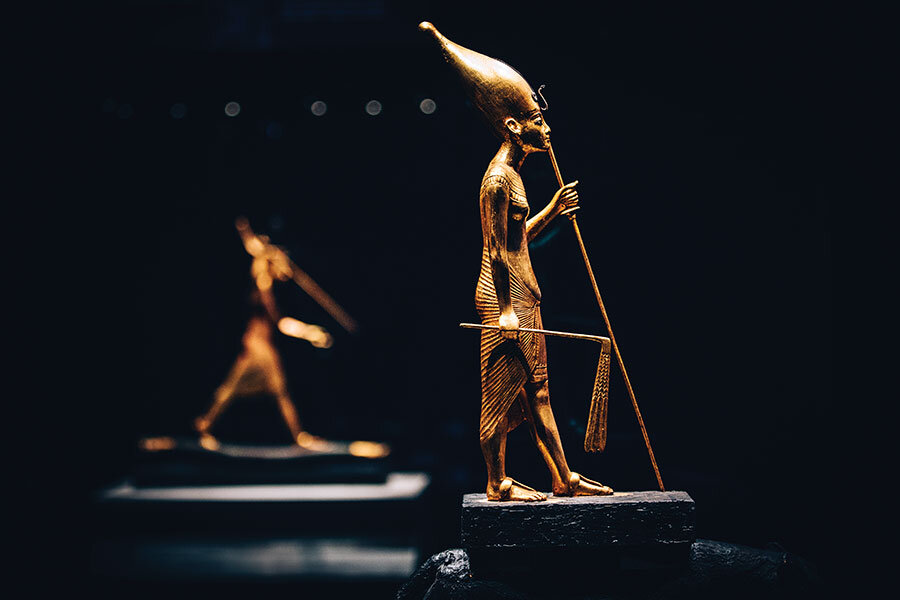 The exhibition embarks on a tour during a time when views among the public seem to have been changing about the true ownership of ancient artifacts that were taken from the countries where they were discovered.

An exhibition at the California Science Center, a stop on the tour celebrating the near-century that has passed since the discovery of the tomb of Tutankhamen, is quite appropriately fit for a king.

"King Tut: Treasures of the Golden Pharaoh," an expansive exhibition with some 150 authentic artifacts from the tomb of the "Boy King," will be open until Jan. 6 at the Los Angeles museum. According to organizers, it is the largest King Tut exhibition that has ever been on tour and includes 60 artifacts that have never before left Egypt.

"The story of King Tut has intrigued us for nearly 100 years, and this is a chance for people to explore more about his story as well as the discovery itself and what it took to get there," says John Norman, managing director for exhibitions with exhibit producer IMG, in an email interview. "These are authentic artifacts that have lasted for more than three thousand years, from the only intact royal tomb ever discovered in Egypt."

The exhibition embarks on a tour during a time when views among the public seem to have been changing about the true ownership of ancient artifacts that were taken from the countries where they were discovered.

However, earlier this year, French President Emmanuel Macron brought on two experts, writer Felwine Sarr and art historian Bénédicte Savoy, to devise a plan for returning African artifacts that are currently in France.

"African heritage must be highlighted in Paris, but also in Dakar, in Lagos, in Cotonou...," Mr. Macron said during a trip to Africa in 2017. "I want the conditions to be met for the temporary or permanent restitution of African heritage to Africa."

King Tut's artifacts, though, "have not been subject to the kinds of cultural appropriation [or] theft that has occurred with other antiquities," says Diane Perlov,  senior vice president for exhibits at the California Science Center.

"They are available to us today because they have been continually under the auspices of the Egyptian Ministry of Antiquities and secured in the Egyptian Museum as the world's cultural heritage," she says.

Archaeologist Howard Carter found King Tut's tomb in 1922, the same year that the British government had issued the Unilateral Declaration of Egyptian Independence, which stated, "The British protectorate over Egypt is terminated, and Egypt is declared to be an independent sovereign state." (Egypt did not establish an official republic until 1953.)

King Tut's treasures have gone on tour multiple times since, including in 1972, when the tour's first stop was the British Museum after Egypt and Britain were able to overcome differences and reached an agreement to have the antiquities on display there.

Get the Monitor Stories you care about delivered to your inbox.

Dr. Perlov said that some 40 percent of the artifacts have left Egypt for the first and last time: At the close of the world tour, the collection will be placed in a permanent exhibition at the Grand Egyptian Museum, which is currently under construction.

Perlov recalls speaking with curators and conservators in Egypt about what they hope guests to the exhibition take away from their experience. "They expressed that they do not see King Tut as solely Egypt's legacy," says Perlov. "They see him as the world's legacy. His story and these beautiful artifacts reveal an important period of ancient human civilization."