Every two months the Nile Scribes update our readers on the most recent Egyptological publications. From popular reads to peer-reviewed scholarship, we hope to illustrate the wide variety of topics discussed in Egyptology. Below are thirteen new books scheduled for release this autumn season (September and October 2018). Perhaps one of them will be your next read!

What new reads can you recommend to us? 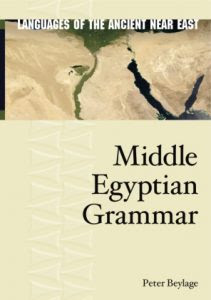 "This grammar provides a comprehensive overview of Middle Egyptian and illustrates its grammatical features with extensive examples from various sources. Exercises at the end of each chapter, along with a sign list and a hieroglyphic word list, provide the reader with the means to apply and practice the content, enabling this book to be used as both a grammar reference and a textbook." 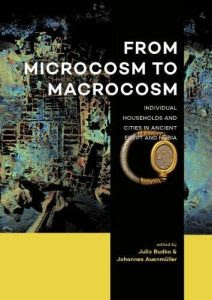 From Microcosm to Macrocosm. Individual households and cities in Ancient Egypt and Nubia

"This combination of research questions on the micro-level with the macro-level provides new information about cities and households in Ancient Egypt and Nubia and makes the book unique. Architectural studies as well as analyses of material culture and the new application of microarchaeology, here especially of micromorphology and archaeometric applications, are presented as case studies from sites primarily dating to the New Kingdom (Second Millennium BC). The rich potential of well-preserved but still not completely explored sites in modern Sudan, especially as direct comparison for already excavated sites located in Egypt, is in particular emphasised in the book. Settlement archaeology in Egypt and Nubia has recently moved away from a strong textual approach and generalised studies to a more site-specific approach and household studies. This new bottom-up approach applied by current fieldwork projects is demonstrated in the book. The volume is intended for all specialists at settlements sites in Northeast Africa, for students of Egyptology and Nubian Studies, but it will be of interest to anyone working in the field of settlement archaeology. It is the result of a conference on the same subject held in 2017 as the closing event of the European Research Council funded project AcrossBorders at Munich." 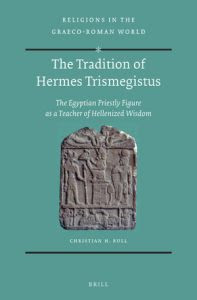 The Tradition of Hermes Trismegistus: The Egyptian Priestly Figure as a Teacher of Hellenized Wisdom

"In The Tradition of Hermes Trismegistus, Christian H. Bull argues that the treatises attributed to Hermes Trismegistus reflect the spiritual exercises and ritual practices of loosely organized brotherhoods in Egypt. These small groups were directed by Egyptian priests educated in the traditional lore of the temples, but also conversant with Greek philosophy. Such priests, who were increasingly dispossessed with the gradual demise of the Egyptian temples, could find eager adherents among a Greek-speaking audience seeking for the wisdom of the Egyptian Hermes, who was widely considered to be an important source for the philosophies of Pythagoras and Plato. The volume contains a comprehensive analysis of the myths of Hermes Trismegistus, a reevaluation of the Way of Hermes, and a contextualization of this ritual tradition." 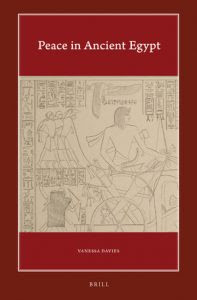 "One of the world's oldest treaties provides the backdrop for a new analysis of the Egyptian concept of hetep ("peace"). To understand the full range of meaning of hetep, Peace in Ancient Egypt explores battles against Egypt's enemies, royal offerings to deities, and rituals of communing with the dead. Vanessa Davies argues that hetep is the result of action that is just, true, and in accord with right order (maat). Central to the concept of hetep are the issues of rhetoric and community. Beyond detailing the ancient Egyptian concept of hetep, it is hoped that this book will provide a useful framework that can be considered in relation to concepts of peace in other cultures." 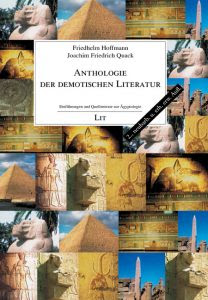 "Never before has the development of Egyptian literature from the Twenty-Sixth Dynasty to Roman times been given such thorough treatment such as in this anthology. All the texts are newly translated, some of these for the first time in German, others perhaps for the first time. An introductory overview of literary history, maps, extensive commentaries and indices allow those interested a deeper engagement with each literary work. At the same time will research into Egypt move beyond literary historical research questions, thus being put on a new, reliable foundation. The volume has been edited and extensively expanded for the second edition." 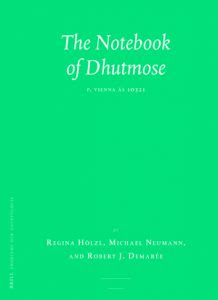 "In The Notebook of Dhutmose Regina Hölzl, Michael Neumann and Robert Demarée document the surprising discovery and the contents of a papyrus scroll found in an ibis mummy jar in the Kunsthistorisch Museum in Vienna. The twenty-four columns of text constitute a unique notebook of the Scribe Dhutmose who is well-known as the author of administrative documents and a private correspondence. He was active as chief administrator of the institution responsible for the creation of royal tombs in Western Thebes at the end of the Ramesside Period, around 1100 BCE. The texts concern financial accounts relating to the acquisition of copper tools and weapons, but also private affairs like an inventory of his amulets and jewelry and a report about the robbery of his personal belongings." 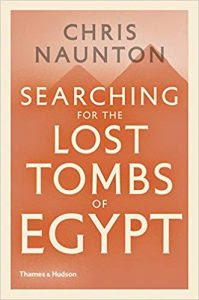 Searching for the Lost Tombs of Egypt

"In this gripping account, Chris Naunton describes the quest for these and other great 'missing' tombs and presents the key moments of discovery that have yielded astonishing finds and created the archetypal image of the archaeologist poised at the threshold of a tomb left untouched for millennia. He skilfully unravels the tangled threads surrounding the burials of the heretic pharaoh Akhenaten and his son Tutankhamun, and coolly assesses whether the boy-king's celebrated tomb might still hold incredible secrets. The Valley of the Kings almost certainly guards hidden treasures. Could other such tombs lie undiscovered? Amazing finds of unsuspected tombs continue to occur throughout Egypt, making headlines worldwide, and renewing the hope that some of these mysteries might yet be solved." 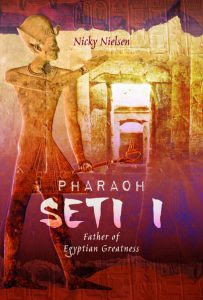 "Pharaoh Seti I ruled Egypt for only 11 years (1290-1279 BC), but his reign marked a revival of Egyptian military and economic power, as well as cultural and religious life. Seti was born the son of a military officer in northern Egypt, far from the halls of power in Memphis and Thebes. However, when the last king of the 18th Dynasty, Horemheb, died without an heir, Seti's father was named king. He ruled for only two years before dying of old age, leaving Seti in charge of an ailing superpower. Seti set about rebuilding Egypt after a century of dynastic struggles and religious unrest. He reasserted Egypt's might with a series of campaigns across the Levant, Libya and Nubia. He despatched expeditions to mine for copper, gold, and quarry for stone in the deserts, laying the foundations for one of the most ambitious building projects of any Egyptian Pharaoh and his actions allowed his son, Ramesses the Great to rule in relative peace and stability for 69 years, building on the legacy of his father." 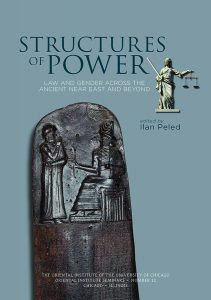 Structures of Power: Law and Gender Across the Ancient Near East

"This volume publishes the proceedings of the eleventh annual University of Chicago Oriental Institute Seminar. Its central goal is to present a cross-cultural study of the intersection between law and gender relations in the ancient world, with a focus on the ancient Near East. When reflecting upon the formation, perpetuation, and interactions of social structures that frequently come into conflict with each other, one discovers that gender constructs are used by mechanisms of social monitoring and control; structures of power. One such example is the realm of jurisdiction and legislation. This volume uses the sphere of legal institutions as a prism through which to consider gender relations in the ancient world, both in the Near East and beyond. The way in which similar issues were manifested in different cultural and historical contexts is examined, with the goal of identifying common denominators as well as particularities. The three themes discussed in this volume are examined through multiple historical-cultural examples." 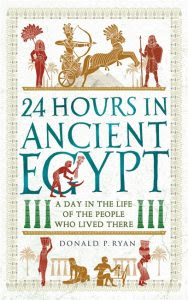 24 Hours in Ancient Egypt. A Day in the Life of the People Who Lived There

"Ancient Egypt wasn't all pyramids, sphinxes and gold sarcophagi. For your average Egyptian, life was tough, and work was hard, conducted under the burning gaze of the sun god Ra.During the course of a day in the ancient city of Thebes (modern-day Luxor), Egypt's religious capital, we meet 24 Egyptians from all strata of society – from the king to the bread-maker, the priestess to the fisherman, the soldier to the midwife – and get to know what the real Egypt was like by spending an hour in their company. We encounter a different one of these characters every hour and in every chapter, and through their eyes see what an average day in ancient Egypt was really like." 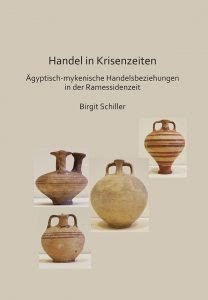 "This book provides an overview of the sites of Mycenaean pottery finds in Egypt and Nubia. Data from thirty-six sites in Egypt and twelve sites in Nubia are presented. The context of the vessels and sherds dates from the reign of Akhenaten (18th Dynasty) to that of Ramesses VI (20th Dynasty). The imported vessels were found in the capital cities as well as in fortresses, other cities and tombs. Stirrup jars and flasks came to light frequently." 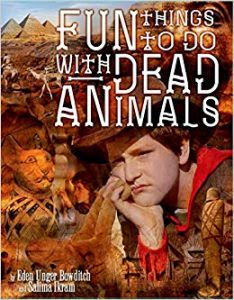 Fun Things To Do With Dead Animals

"Life can be a challenge when your mother gives your friends dead mice in your birthday goody bags and offers to mummify your class pet bunny. Amun Ra (yes, like the Egyptian god) shares the story of his endlessly embarrassing and unconventional life with his Mummy, the famous Egyptologist Amilas Marquis. He regales his readers with adventures of crossing continents, of narrow escapes with stolen artifacts, of death defying run-ins with scorpions, not to mention the humiliation in the face of his peers, with his mother's graphic stories of ancient rites and severed body parts. Along the way, he shares his knowledge about ancient Egypt and the modern Middle East, as well as Europe and North America. This book is appropriate for readers 10–14 but can be enjoyed by parents and children of more varied ages." A Kerma Ancien Cemetery in the Northern Dongola Reach

"This volume is the final report on the excavations of a Kerma Ancien cemetery discovered by the Sudan Archaeological Research Society during its Northern Dongola Reach Survey conducted between 1993 and 1997. It is one of the very few cemeteries of this date to have been fully excavated and provides interesting data on funerary culture as practised in a rural environment, to be compared with the extensive information available from investigations of the cemetery associated with the metropolis of Kerma 100km to the north. It includes a range of specialist reports on all categories of artefacts recovered as well as on the physical anthropology, archaeobotany and archaeozoology."

What are you reading at the moment? Let us know in the comments!

Translated from the German by the Nile Scribes.
Posted by Glenn Meyer at 7:55 AM