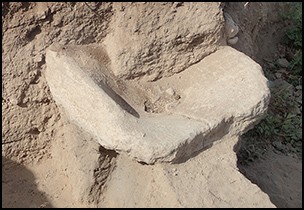 Jebel Moya is the largest-known pastoral cemetery in sub-Saharan Africa. Located 240km south-south-east of Khartoum, Sudan, it was excavated from 1911–1914 by Henry Wellcome, the founder of the Wellcome Trust. It is a multi-phase site with deposits dating back to c. 5000 BC. At 10ha in size and having yielded more than 3100 human burials, Jebel Moya provides scope for exploring the interactions between local pastoral and external traditions on the southern boundary of the contemporaneous Meroitic state, outside of direct Meroitic political control (Brass 2015, 2016). In October 2017, the University College London-University of Khartoum-National Corporation for Antiquities and Museums expedition to southern Gezira undertook new excavations. A key aim was to perform modern, targeted sampling and recording, and archaeobotanical, artefactual, archaeozoological and osteoarchaeological analyses—including ancient DNA (aDNA), isotopes and AMS dating.

Five trenches were excavated to sample surviving archaeological deposits systematically (Figure 1). Trenches 1, 2 and 4 were excavated in 100mm spits and the stratigraphy recorded. Each spit was sampled for archaeobotanical remains. Trench 3 targeted the excavation of an eroding burial (see below).

Figure 1 View towards the south-west, indicating the locations of trenches 1, 2 and 3 (courtesy of NCAM).

Measuring 2×2m, trench 1 was placed on the western side of the valley, and was excavated to a depth of 0.9m (Figure 2). Finds included Meroitic-era ceramics and animal bones, and a horizon of scattered stones (including one quern).

Measuring 2×2.5m (Figure 3), trench 2 was situated near an eroded gully that shows considerable stratigraphic depth. The gully has Late Mesolithic ceramics at the base, followed by Neolithic and subsequently Meroitic-era pottery in reverse order. This was the deepest trench excavated to approximately 1.5m, with Meroitic-era and Neolithic layers. It was one of the richest in charcoal (recovered through flotation) and finds of all types. Sediment samples for phytoliths were also taken. Apart from a quern, lithics, animal finds and abundant pottery, the finds included a clay (probably a goat) figurine (Figure 4) recovered from below a depth of 1m. Subject to further investigation, the clay figurine dates to either the early Meroitic era or the preceding Neolithic.

Trench 3 was situated around a partially exposed burial eroding out of a slope (Figure 5). It contained a probable female aged 25–35 years; the individual was supine, facing right, with the hands placed between the legs. No pathological changes were observed. The dentition was complete, except for ante-mortem loss of the lower-central incisors. Dental attrition was minimal, although advanced labial attrition and surface polishing of the extant incisors could indicate the use of the teeth as a tool. Calculus deposits were observed, mostly on the premolars and molars, and carious lesions affected the right maxillary canine and first premolar. Samples were collected for isotope, radiocarbon and aDNA analyses.

Trench 4 was placed near the eastern edge of the site on the southern side of an erosional gully, which had exposed bones (animal) and a large quern, which was later excavated (Figure 6). The trench's sediments contained abundant ceramics and charcoal, as well as beads and lithics. Sediment samples for phytoliths were taken from both the natural strata and a possible residue on the quern surface.

Figure 6 Trench 4, east-facing section at the end of the excavations, including a massive quern (courtesy of NCAM).

Two metres to the west of trench 1 is a stone-ringed tumulus. A 2×2m trench encompassed a corner of this tumulus and was deepened to the first compacted surface. No below-ground features or cuts were exposed to confirm this as a burial mound. Current interpretation is that the mound was built on the ground's surface, after the formation of the compacted surface had begun. A ring of stones was then placed around the mound.

Systematic flotation was performed on 40 samples using a washover bucket method through a 250 micron mesh. This yielded charcoal, seed and fruit remains. They are being analysed at UCL's archaeobotany laboratory.

This is the first time that occupational units at Jebel Moya have been properly excavated and documented. The scarcity of African pastoral burial complexes and the size of Jebel Moya make this a very valuable archaeological resource. Jebel Moya offers valuable information on diet, landscape movements, exchange and population composition.

We wish to thank the Society for Libyan Studies for its generous grant for the research and the 2017 field season. The archaeobotanical and bioarchaeological analyses were funded by the European Research Council (grant 323842) and the European Union's Horizon 2020 research and innovation programme under the Marie Skłodowska-Curie (grant agreement 665778), respectively. We are also grateful to Andy Bevan, Sue Hamilton, Kevin MacDonald, Scott MacEachern and Isabelle Vella Gregory for their expertise and support, as well as the British Museum and NCAM.