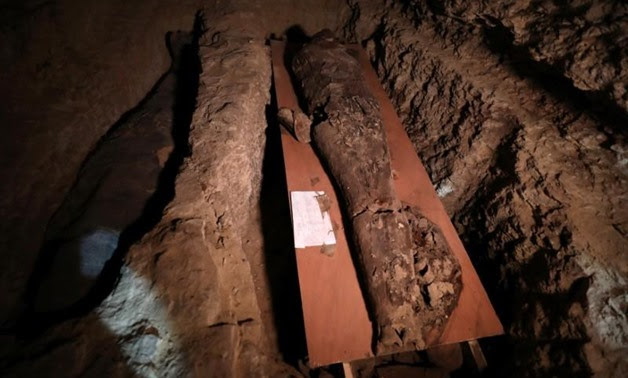 The arrest comes as part of Egypt's continuous efforts to combat antiquities' trade, which is prohibited in the African country.

The traders were trying to sell the coffinfor a sum of LE 250,000 ($13.9 thousand), Ayman Ashmawy, the head of Ancient Egyptian Artifacts at the Ministry of Antiquities, said. He added that a specialized committee was formed by the ministry to inspect the coffin and decide whether it is original or not.

Following examination, it was found that the coffin dates back to the Ptolemaic kingdom or the late period of ancient Egypt, Ashmawy said, adding that the coffinwas found containing a mummified body. Ashmawy said the seized antiquities donot include the objects reported missing from the ministry's stores or museums.

Describing the coffin, the Antiquities Ministry's official said that it is a human-shaped wooden coffin, with a layer of colored gypsum topped by a human face of a woman with a wig.

The coffin depicts the winged sky god, Horus; a view of the embalming process carried out on the deceased; and a text engraved in the ancient formal writing of hieroglyphs, Ashmawy said.

Aview of a snake can be recognized on each of the right and left sides, representing the protecting gods, Ashmawy added.

In July, Egypt received 118 ancient Egyptian artifacts that were smuggled to Italy, Egyptian General Prosecutor Nabil Sadek stated. The antiquities had been presented at a temporary exhibition at the Egyptian Museum for several days.

In October, The Egyptian Embassy in Kuwait received the cover of a wooden ancient coffin, which was smuggled to Kuwait in March.