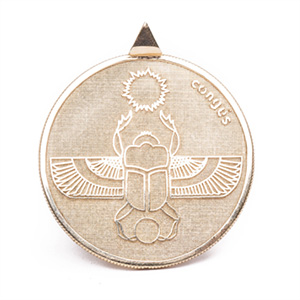 First there was the return of the ankh symbol to fine fashion jewelry. And now—at a growing number of popular jewelry ateliers—designs are going full-tilt Ancient Egypt.

Trendy jewelry collections (including Retrouvai, Jacquie Aiche, and Foundrae) have been featuring talismanic symbols in their collections for years now—so it stands to reason that ultra-impressive Ancient Egypt, with its thousands of deities and countless cool symbols, should again have a moment in the style spotlight.

Here are a few of my favorite Egyptian-inspired pieces currently out there. 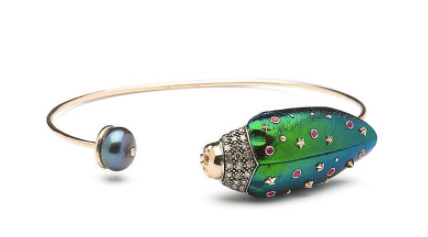 The ancient Egyptian god Khepri was often depicted as a scarab beetle—and according to Wikipedia, the Egyptians believed that Khepri "renewed the sun every day before rolling it above the horizon, then carried it through the other world after sunset, only to renew it again the next day." In short, the scarab was an important and sacred symbol. This Bibi Van Der Velden Scarab and Pearl bangle, priced at roughly $4,080, features a real scarab decorated with 18k rose gold and sterling silver; its wings are set with amethyst and pink sapphires. The opposite end of the bracelet boasts a beautiful Tahitian pearl.

This 14k yellow gold Congés Scarab bracelet, $2,200, features white and black diamonds wreathing a winged scarab. On the opposite side is some good ol' personal protection, in the words transformation, protection, and royal achievements. 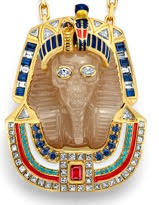 You'll see this glorious Buddha Mama pendant occupying a full page in JCK's May issue—it's the mag's Vault section superstar. But I couldn't very well leave it out of an Egyptian jewelry roundup, now could I? The pharaoh skull, $28,400, is comprised of a 20 ct. grey moonstone set with diamond eyes. 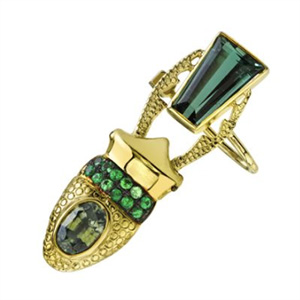 Los Angeles–based designer Daniela Villegas has been making a sparkling, color-drenched study of scarabs (and all beetles, really) since launching her collection. There are so many beautiful scarab-themed pieces to choose from in her line, but I especially love this Scarab Ear Climber earring, $5,290, from her Backyard Collection. It features 1.32 cts. t.w. tourmalines, 0.14 ct. t.w. carats tsavorites, and 0.61 ct. t.w. green sapphires. And it looks amazing (and creepy, in a fabulous way) sitting on the ear.