A tour of Berlin's art masterpieces with Andrew Graham-Dixon | Christie's 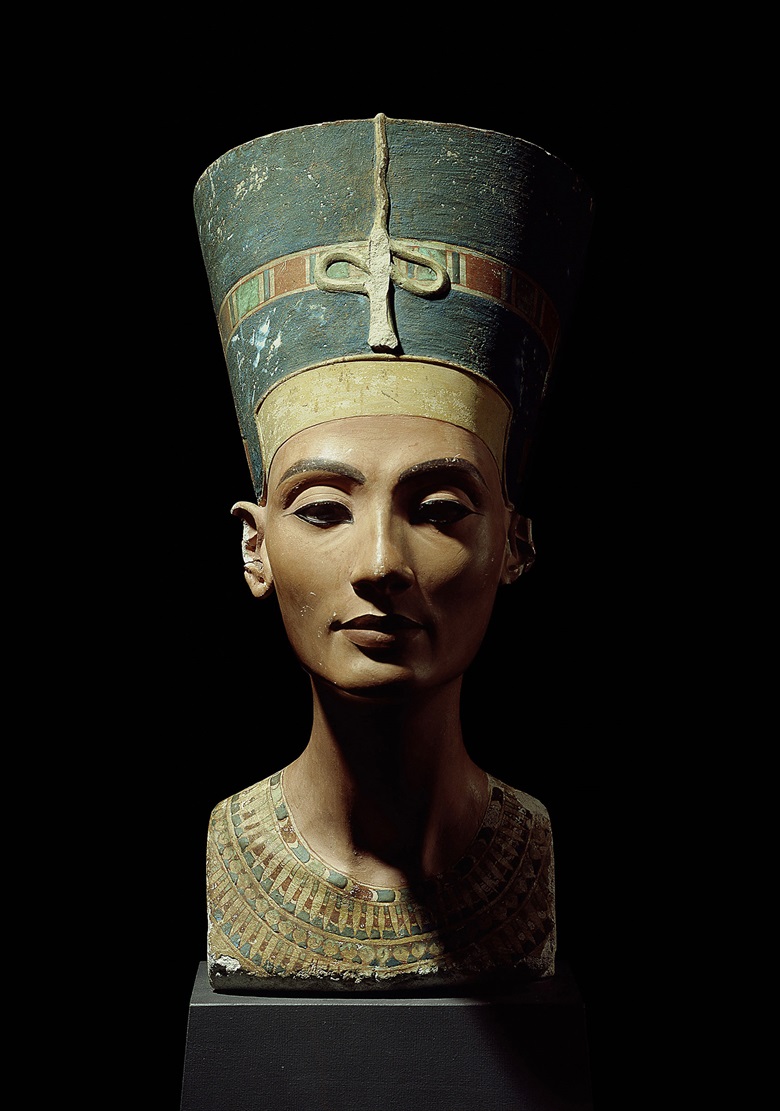 Berlin is one of the great destination cities for anyone interested in the visual arts, in archaeology or in antiquity — a fact Andrew Graham-Dixon was reminded of on a recent visit

I am always touched by Berlin's raggedness, the feel it still has of a place emerging from — or returning to — its own ruins. I can't think of another city where the old and the new, the half-built and the unbuilt, windblown desolation and perfect kemptness coexist quite so jarringly.

I was last there earlier this year, on a cold winter's day in January. Not many other pedestrians were out to brave the minus-something temperatures. On the plus side, this meant that most of the museums I had come to visit were populated by the sparsest of crowds — and what museums they are! You could spend a month in Berlin and still fail to exhaust their riches. 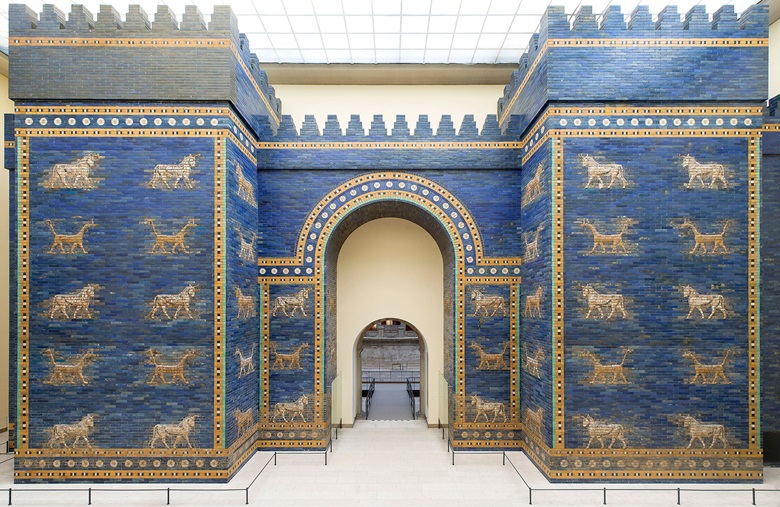 The most famous is probably the Pergamon Museum, with its great slabs of frieze from the Pergamon Altar, unearthed in the 1870s by Prussian archaeologists, and its grand reconstruction of the Ishtar Gate and the Processional Way of ancient Babylon, formed from hundreds of thousands of pieces of vividly glazed brick discovered during German excavations in Mesopotamia in the early 20th century. It is quite possibly the world's most impressive jigsaw puzzle, conjuring up the daunting splendour of the great tyrant Nebuchadnezzar's city as it was in the 6th century BC.

Just around the corner, on the city's so-called Museumsinsel (Museum Island) is the Altes Museum, an imposing neoclassical hulk designed by Karl Friedrich Schinkel, which houses a collection of antiquities that owes its origins to the Renaissance cabinets of art and curiosities formed by the Electors of Brandenburg. 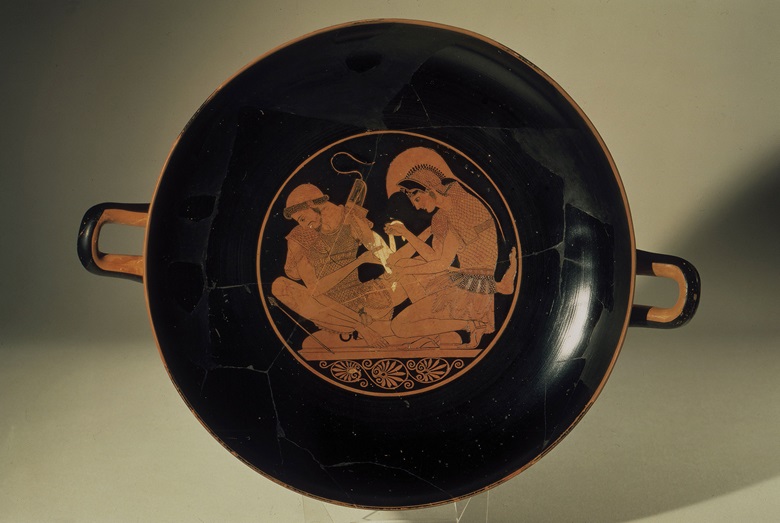 My favourite things here are small but exquisite, microcosmic in comparison with the macrocosmic wonders of the Pergamon: the drinking cup of the potter Sosias, a wonderful vessel from the fifth century BC found in an Etruscan grave in Italy, decorated with scenes from Homer and Greek myth evoking death and resurrection; and the so-called Green Caesar, named for the colour of the basanite from which it is carved, which brings us face to face with Julius Caesar himself, brow furrowed, staring eyes formed disconcertingly of white marble set into the dark stone of the rest. Conservation indicates that the eyes are a later addition, but perhaps they reflect the original arrangement, itself meant to recall Caesar's famous words 'Veni, vidi, vici.' 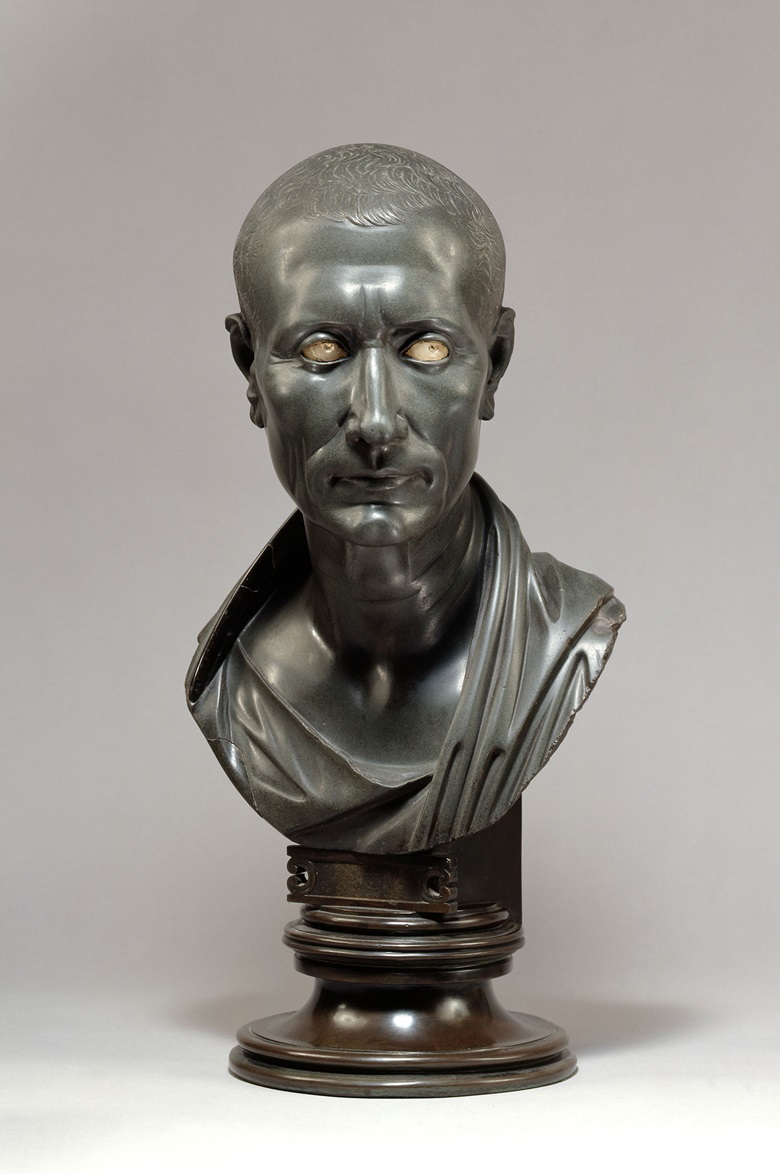 The 'Green Caesar', named for the colour of the basanite from which it is carved. Photo: Scala, Florence/bpk, Bildagentur für Kunst, Kultur und Geschicht

Just above the Altes Museum is the Alte Nationalgalerie, a building that reflects the growth of German nationalism in the years following the revolutions of 1848. Completed in 1876, it was brought into being to answer calls for a museum dedicated specifically to German painting and sculpture, and houses what must be the most impressive collection of German Romantic art anywhere in the world: the room reserved for the works of Caspar David Friedrich, the most quintessentially melancholic of all 19th-century painters, is utterly haunting and memorable. 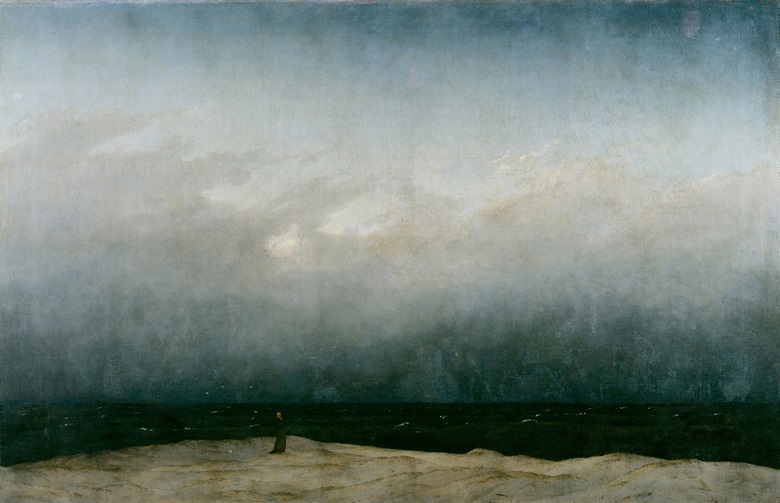 From there, at the risk of bringing on a bout of Stendhal Syndrome, a visitor might take the short walk to the Neues Museum, which contains one of the world's great collections of Egyptian antiquities, including the globally (and justly) famous painted limestone bust of Nefertiti uncovered by German archaeologists excavating the workshop of Thutmose, sculptor to the pharaoh Akhenaten, on a site in Amarna in December 1912. This is, quite simply, one of the wonders of the world.

Last but not least, perched on the northern tip of the island, is my own personal favourite of all the Berlin museums: the Bode Museum. Here the collections, notable above all for sculpture, are displayed in the seemingly negligent manner of the late 19th century, which very much adds to the charm of the place. 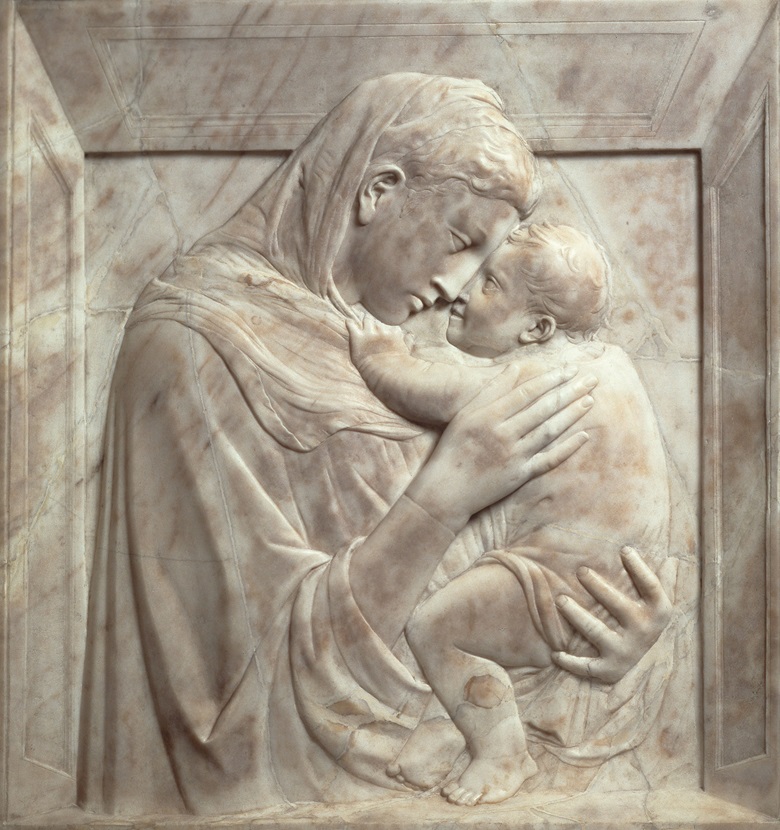 Even on a busy day, there rarely seems to be much of a crowd, and the objects — which range from masterpieces of Renaissance limewood carving by Tilman Riemenschneider to baroque ivories, from crude works of medieval folk art to graceful dancing figures by Canova — can be enjoyed in relative peace and isolation. For me, the outstanding work in the museum is a schiacciato  relief in marble, by Donatello, of the Madonna and Child: Mary presses her face to that of Jesus, a refugee mother desperately comforting her child.

Berlin is one of the great destination cities for anyone interested in the visual arts, in archaeology or in antiquity. The city's riches are one legacy of the German Enlightenment, which was actually a rather small window of time, stretching from the lifetime of Goethe (1749–1832) to the outbreak of the First World War: a golden age of German civilisation that passed, decisively, with the advent of the toxic version of German nationalism espoused by Hitler and the National Socialists.

What the art of Berlin tells us is there has only ever been one human race: creating, striving, imagining, thinking, making and being

The Nazis poisoned attitudes to art with their attitudes to race, and forced a generation of liberal art historians into exile. The institution where I learned my art history, the Courtauld Institute in London, was to a great extent shaped by German and Jewish intellectuals fleeing from persecution: men like Aby Warburg, or Edgar Wind. In his book A Little History of the World, another well-known émigré art historian from the German-speaking world, Ernst Gombrich, remembered his own horror at this turn of events: 'it seemed to me inconceivable that anyone might ever again stoop to persecuting people of a different religion... or question the rights of man. But... I myself saw Hitler's brown-shirt supporters beating up Jewish students at Vienna University.'

Berlin still bears the scars of the 20th century's tumult. As often as not, the city's many open spaces reflect not the decisions made by town planners, but the impact of bombs. They are not really open spaces, but blank spaces, still to be made good. Likewise, many of the areas that once bordered the Berlin Wall feel less like neighbourhoods than wounds yet to be healed. 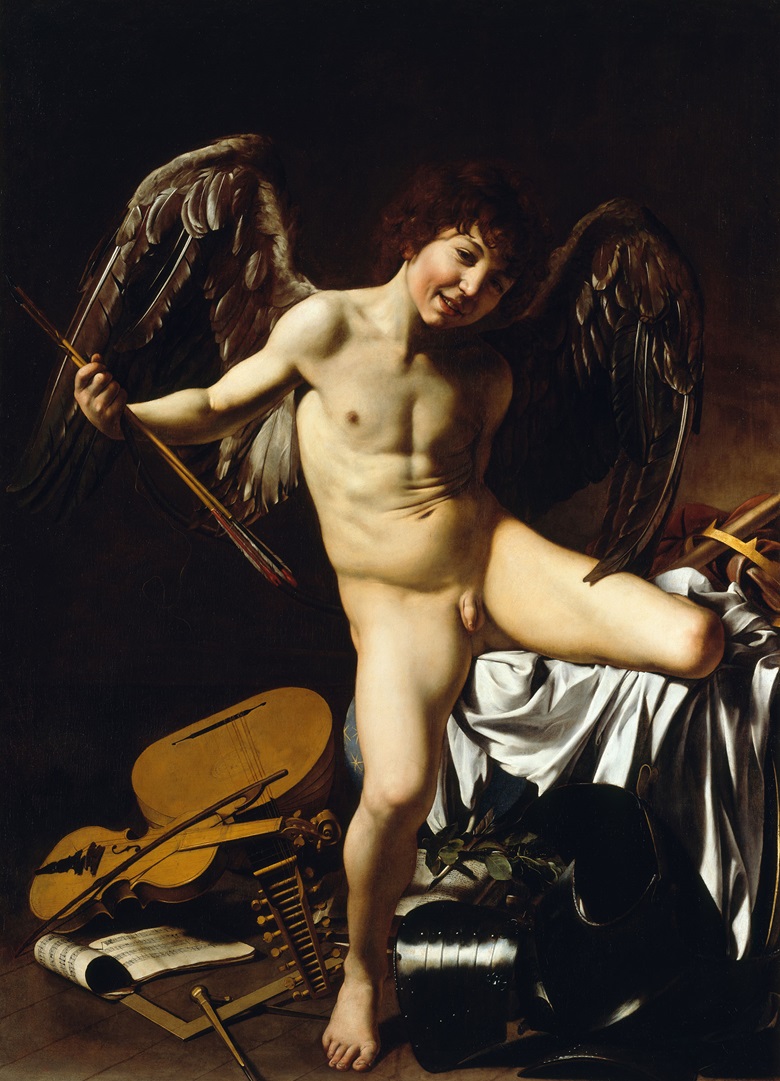 I felt this most strongly as I walked from Museum Island to the Gemäldegalerie, which is one of the best painting museums anywhere. To find it, you have to negotiate what seems like a mile of ring road and urban wasteland, and yet, when you do reach this rather unpromising, bunker-like structure, you encounter some of the most brilliant works of art in existence: paintings by Titian, Caravaggio's Amor Vincit Omnia  and, perhaps best of all, one of my top ve paintings in the world, Giovanni Bellini's incomparable Resurrection, a bright and lovely dream of redemption and hope in the cruellest of worlds.

To my mind, it is art that points the way forward in troubled times, and always has done, even if its message has not always been listened to. What the art of Berlin says above all, in its multifarious and manifold nature, is something very straightforward and very humane. What it tells us is that from ancient Africa to ancient Greece, ancient Rome, medieval France, Spain under the Moors, Renaissance Italy, 19th-century Germany and into the present, there has only ever been one  human race: creating, striving, imagining, thinking, making and being.

There are no other races, no other peoples. There's only us, and if we can see our many selves, side by side, within the confines of the great museums of world history, then surely we can get along side by side in the here and now. For me, this is really why museums like those in Berlin matter. They remind us of who we are, and of how we should behave.

This April, Christie's invites you to a series of special events in Berlin celebrating the very best of making and collecting art in German
Posted by Glenn Meyer at 8:07 AM