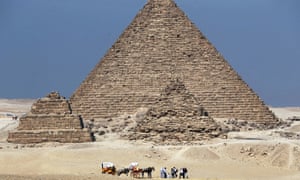 Tourists ride in horse carts near the Giza pyramids, a site where many tourists are targeted by souvenir sellers. Photograph: Mohamed Abd El Ghany/Reuters

For some tourists at Egypt's renowned archeological sites, being hectored to buy pieces of parchment, a camel ride or an alabaster statue is all part of the experience.

But the harassment might become a thing of the past, after parliament approved a law allowing authorities to fine up to EGP10,000 (about £405) anyone found to be pestering tourists "with the intention of begging or promoting, offering or selling a good or service".

The law is intended to clamp down on people offering services and selling trinkets to tourists ahead of the summer season. The government hopes to protect Egypt's fragile but valuable tourism industry, which makes up 12% of the economy.

Oscar Saleh, who offers tourists camel rides next to the pyramids of Giza, a site where many tourists are targeted for souvenirs and horseback rides, denied there was any problem. "Go visit the Egyptian Museum, go visit the pyramids – no one will bother you," Saleh said.

An Egyptian tour guide based in Luxor, who declined to give his name, said the law would target people "fighting for food, fighting to feed their families".

"I've never really heard of the law achieving anything here," he added.

Some MPs and former officials felt that punishment should be far stricter, proposing fines of up to EGP20,000.

"A EGP10,000 fine is not enough," said former minister of antiquities Zahi Hawass, speaking on one of Egypt's nightly talkshows. "There should be both a fine and a prison sentence, because these people harm the income of the country."

Tourist numbers have fallen in recent years from a high of 14.7 million in 2010 due to the political turbulence of the 2011 revolution and 2013 military coup. All flights from Russia, and flights from the UK to the Sinai resort town of Sharm el-Sheikh, were suspended after terrorists downed a plane carrying Russian holidaymakers in October 2015.

However, Egyptian tourism showed clear signs of recovery in 2017, with arrivals jumping to 8.3 million compared with 5.4 million the previous year, according to the Oxford Business Group. Direct flights between Russia and Cairo resumed earlier this month.