Emblems for the Afterlife - Archaeology Magazine

Emblems for the Afterlife 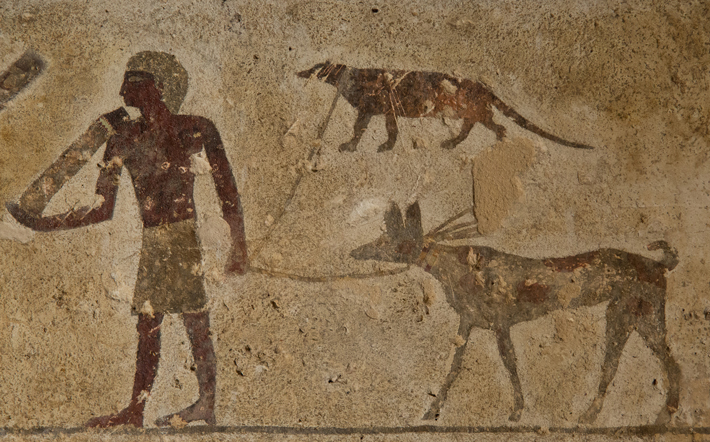 In one of the tomb paintings of Egypt's Beni Hassan cemetery site, a hunter leads both a dog and a mongoose on leashes. The latter, a predator, likely has an allegorical role.

The decorated tombs of Beni Hassan, a cemetery site on the east bank of the Nile in central Egypt, not only bear the stamp of the artisans who decorated them, but also reflect the lives lived by the deceased. The tombs date to the 11th and 12th Dynasties of Egypt's Middle Kingdom (2050–1650 B.C.) and offer some of the best-preserved examples of how artists and tomb owners conceived of the natural world. Originally surveyed between 1893 and 1900 by Egyptologist Percy E. Newberry, they are now being reexamined by a team of researchers from Australia's Macquarie University. According to project director Naguib Kanawati, the tombs at Beni Hassan are among the most complete and important of Middle Kingdom Egypt. The works depict a great range of fauna and flora, including species rarely seen in Egyptian art. They have proven especially revealing of the relationships Egyptians had with animals. 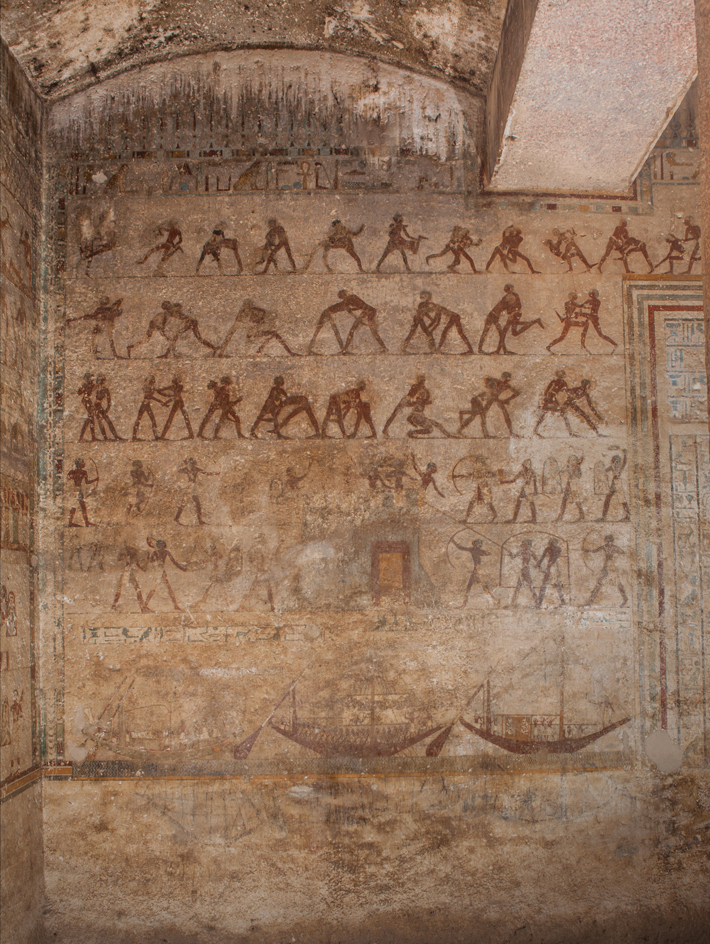 The military capability of the region, governed by many of the interred, is a common theme. A painting of soldiers training and taking part in a naval siege appears in the tomb of an individual named Amenemhat.

Many of the tombs at Beni Hassan include full-panel representations of animals in their natural habitats, including marsh and desert scenes that show a keen observation of animal behavior. "Sometimes they simply reflect everyday activities," says Linda Evans, an Egyptologist and ethologist at Macquarie. "We see men driving herds of cattle, donkeys, sheep, and goats, which would have been a common sight in the surrounding fields. Other images show wild animals being hunted in the deserts or encountered in the marshes along the Nile."

The degree of detail in the paintings can give the impression that they might be an accurate record of extant flora and fauna for the time in which they were produced. But according to Lydia Bashford, whose research at Macquarie focuses on birds in ancient Egyptian culture, the paintings are unlikely to be reliable as sources. "Investigations into tomb decoration and agency have shown that artists frequently replicated the content and scenes from contemporary tomb walls and those of earlier periods," she says. Furthermore, she explains that certain animal species held significant cultural meaning, and so their images were often reproduced whether the animals were present or not. 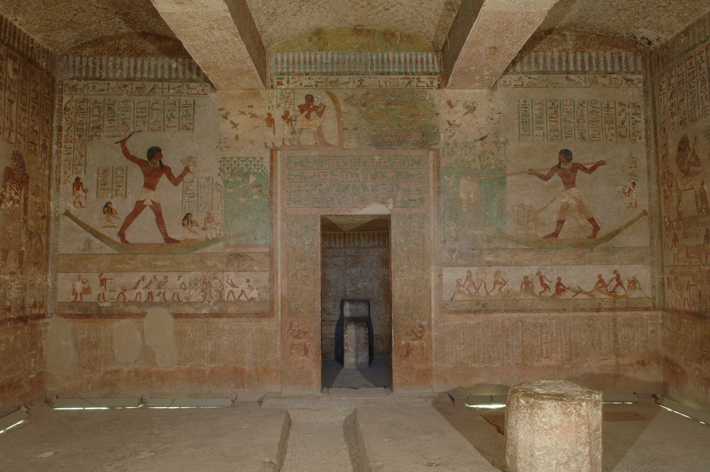 The Beni Hassan tomb paintings, including this one belonging to an official named Khnumhotep II, depict a variety of themes relating to the lives of the deceased, and reflect their sense of the cosmos.

The team has surveyed 39 tombs from Beni Hassan's upper section, all of which are cut into the limestone cliff face. Of those, 12 are embellished with artwork and belonged to government officials of the eastern Egyptian province called the Oryx nome. Paint made from ground minerals was sometimes applied directly to the limestone, or onto a finish made of gypsum plaster. Though the motifs of the Beni Hassan paintings are diverse, much of the subject matter depicted in them is similar from tomb to tomb, suggesting that specific scenes were considered an essential part of any memorial. "My gut feeling is that there were expectations that you would have certain images in your tomb," says Evans. "They were a reflection of the tomb owner as a member of the king's administration, and as somebody who was responsible for maintaining what the Egyptians called maat, which is the concept of balance in the universe." 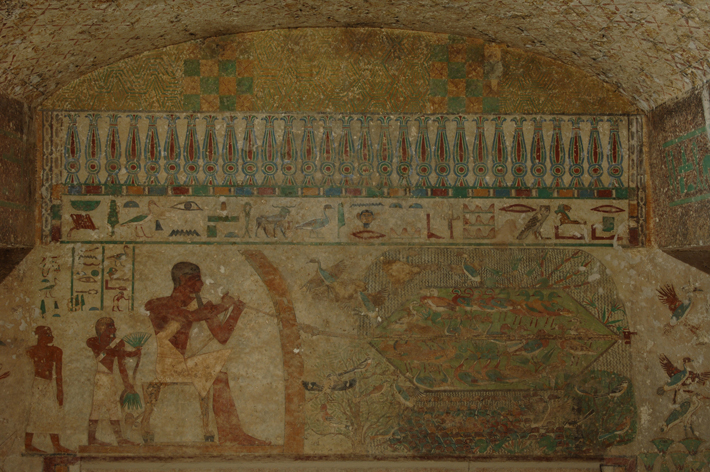 Khnumhotep II is depicted in his tomb catching waterfowl in a net, which scholars say symbolizes the deceased exerting control over forces of chaos—often represented by birds in Egyptian art.

Some panels depict events that officials were required to oversee every year, such as grain harvest and shipment to other parts of the kingdom. "These are standard scenes," Evans says. "The deceased is telling the world, 'Look, I'm a good guy, I did the right thing, I did what was expected of me. I helped the king maintain order by doing my job.'" Some scenes were also intended to show off the power of the Oryx nome. The strength of the local army appears as a theme in the same location in three separate tombs in which the walls are divided into two sections: the upper showing many rows of wrestlers, presumably soldiers undergoing training, and the lower depicting the siege of a fortress and troops crowding onto boats. According to Melinda Hartwig, curator of Egyptian, Nubian, and ancient Near Eastern art at Emory University's Michael C. Carlos Museum, "In the Beni Hassan tombs, wrestling scenes are common and are found alongside battle scenes. These wrestling scenes depict all kinds of grips and holds that give us a window into ancient Egyptian sport, or, in these cases, more likely physical training for soldiers." 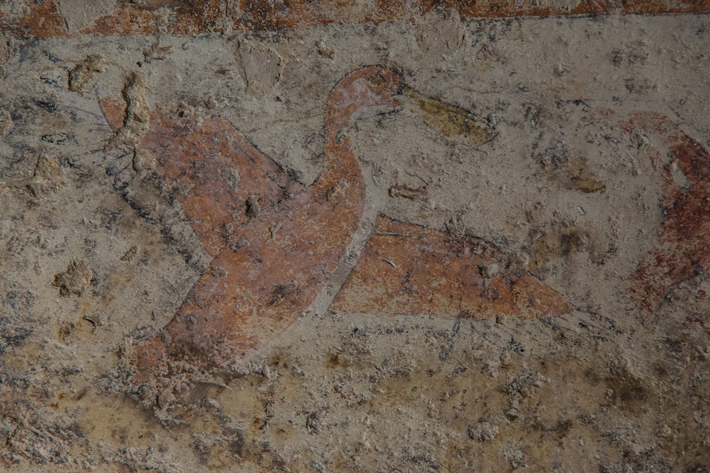 This pelican beginning to take flight, unusual in Egyptian art, displays anatomical accuracy, and typifies the special attention paid to birds at the site.

Differences in the content of the paintings across the site might reflect the individuality of tomb owners and the wide array of themes they wished to include. "No two scenes are exactly the same," says Evans. "You have the artists bringing in their own idiosyncrasies, in terms of their choice of where to place certain images, and their abilities." Evans speculates that an artist might also have been told, "'I would like you to include this,' so long as it was not something that was wildly outside of decorum or expectations of what was supposed to be on their wall."

Beni Hassan has yielded images of animals hardly ever seen in Egyptian art, such as bats, pigs, and an incredibly rare image of a pelican. The bird is shown in the process of taking flight and was found in the tomb of an official named Baqet II. Nearby, in the tomb of Baqet III, dozens of species of birds are depicted along with the Egyptian names for each, almost as though the deceased had been an avid bird watcher or amateur ornithologist. "The tomb of Baqet III comprises one of the most magnificent collections of ancient birds depicted in Egyptian art," says Bashford. 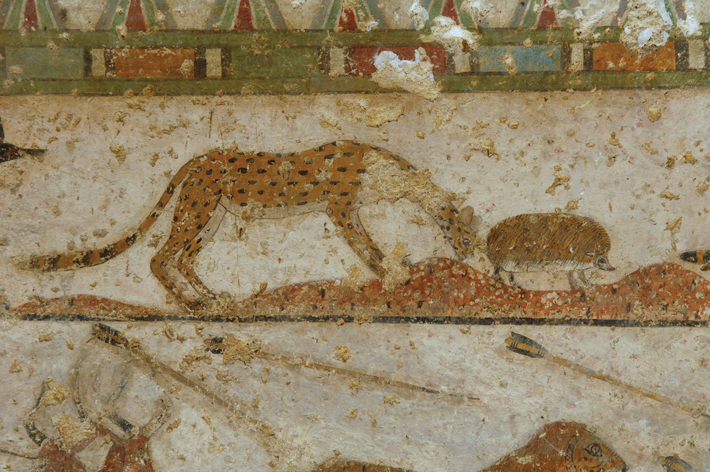 Perhaps due to local worship of a feline goddess called "the scratcher," the tombs at Beni Hassan have an abundance of cat images, including this one of a cheetah approaching a hedgehog.

It is important to note, according to Evans, that animal images often had a symbolic function, and potentially carried a deeper spiritual or magical meaning to the Egyptians. "The tomb was a very potent space in ancient Egypt," she says, "so the paintings generally, and the animal images in particular, may have had multiple functions." 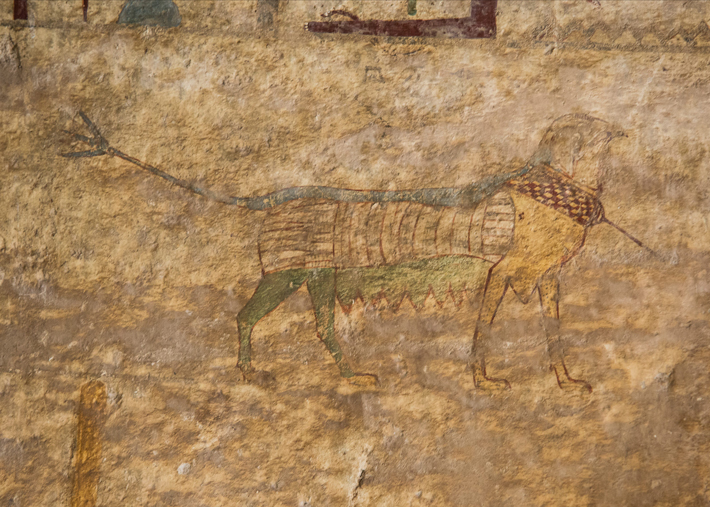 This image of a falcon-headed canine is rare and thoroughly reflective of the symbolic approach often taken at Beni Hassan in its depictions of animals.

One theme that seems to run across many of the tombs at Beni Hassan as an allegory of sorts is the idea of the dominion of the local officials over forces of chaos or disorder. Evans says that hunting scenes, in particular, can be thought of in a similar way to images of local leaders upholding their commitment to the king. Ancient Egyptians, she explains, often saw birds as emblematic of problems such as societal disharmony or, especially, invasion by foreigners. Therefore, imagery such as that on display in the tomb of Khnumhotep II, which shows a hunter hauling in a net of water birds, can be read as symbolic of victory over the potential calamities they represent. In another example, perhaps the only one of its kind in Egyptian art, a hunter leads a mongoose on a leash. While the tombs at Beni Hassan are replete with scenes in which hunters are shown with dogs, the leashed mongoose serves as a potent metaphor. "If you look at all of the scenes of the river marsh areas, they are always full of life," Evans explains. "You've got birds above the thicket. You can see hippos, fish, and crocodiles underwater. They appear to be simply a celebration of nature. But when I saw the leashed mongoose, I suddenly thought I'd been misreading them. The tomb owner is actually showing his ability to use these as hunting tools, to kill birds, the symbols of chaos. The mongoose is acting on the side of maat."

Ancient Egyptian deities were often represented as animals and this too is on display at Beni Hassan. According to Evans, local people worshipped a cat goddess called Pakhet, meaning "the scratcher." Therefore, many of the depictions of cats in the cemetery complex likely had spiritual significance. "There are many images of cats at the site, including leopards, lions, caracals, servals, and African wildcats," she says. These images are likely also significant because it is not until the Middle Kingdom that the first evidence of domestic cats begins to appear in tomb scenes.

Elsewhere, in the tomb of an individual known as Khety, researchers have found one of the most arresting images at Beni Hassan—a four-legged creature with the head of a bird. It has been the source of much scholarly discussion since Newberry first recorded it. "The Middle Kingdom tomb paintings at Beni Hassan cover almost two centuries," says Hartwig, "and give specific details about birds, dogs, and human activities. In the artists' attempts to reproduce many types of animal life, they also included composite creatures, like the falcon-headed canine, which was probably derived from myth." The Egyptians often used this type of imagery to convey the complex nature of divine or demonic forces.

Taken as a whole, the tomb paintings have much to say about the variety of realms of ancient Egyptian existence and, at the same time, intimate some sense of an Egyptian cosmology. As Bashford puts it, "An image can be both what appears to us to be a scientific representation and simultaneously contain layers of symbolic meaning." Going forward, researchers using far more advanced techniques than were available to Newberry aim to study the architectural, artistic, and administrative developments of Middle Kingdom Egypt.