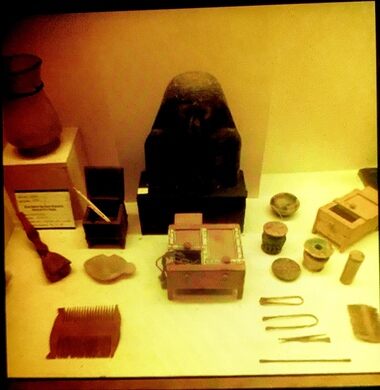 These medicine cabinet staples are part of the museum's collection of everyday objects.

The University of Pennsylvania Museum of Archaeology and Anthropology (or for short, the Penn Museum) has an impressive collection of more than 42,000 Egyptian artifacts. While the museum is more notable for its 13-ton Sphinx of Ramses II and its 463 mummified specimens, it also houses an impressive collection of everyday Ancient Egyptian objects, including 52 pairs of tweezers.

The tweezers range in material from iron to copper, and in age from the Twelfth Dynasty (around 1900 BC) to the Roman Era. Most of the objects are intact, but are presumably not fit for hair plucking or atomic manipulation.

The tweezers are part of the museum's collection of everyday objects. Not all items in this collection are available to view in-person. The museum has 48 combs, 77 sandals, 33 plates, 58 food remains, 81 pins, 28 balls, and 1,241 bowls. Only four of the pairs of tweezers are actually out on display.

While these objects may not be as mind-blowing as a mummy or a Sphinx, they hold a greater historical value as they are indicative of how Ancient Egyptians lived. You'll find them on display in a dark, undervisited anteroom with a copy of the Rosetta Stone and a cat mummy.

Know Before You Go

The Penn Museum is open every day except Mondays, from 10 a.m. to 5 p.m. It is handicap accessible and offers multilingual guided tours and audio tours. Admission is $15 for adults with discounts for students and children, and is free for servicemembers, infants, members, and University of Pennsylvania staff and students.

The Tweezer collection is mostly in storage, but the items on view are available in a case (in the wall) of the antechamber room in the "Egypt (Mummies)" Gallery. The case is located on the left wall, close to the door. The room may or may not be open due to ongoing construction in the building; however, it should not be a major problem.