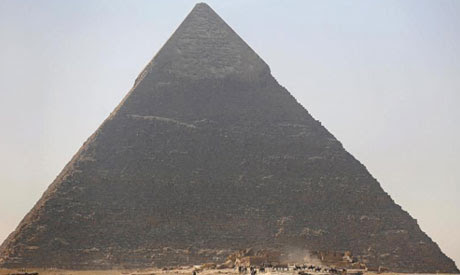 FILE PHOTO: Tourists visit the Pyramid of Khufu, the largest of the Great Pyramids of Giza, on the outskirts of Cairo, Egypt on March 2, 2016. REUTERS

An Egyptian prosecution has ordered the four-day detention pending investigation of a man who climbed to the top of the Great Pyramid of Giza with the intention of committing suicide by jumping off.

The prosecution charged the unnamed worker, who is in his 20s, with endangering himself and others as well as climbing the 4,500-year-old Pyramid of Khufu, which is prohibited by law.

According to the prosecution, the tourism police arrested the man on Saturday after they – with the help of the man's father and sister – were able to talk him out of committing suicide.

Investigators say the man suffered a psychotic break triggered by problems with his neighbours, which sparked his suicidal thoughts.

Egypt has strict rules against scaling pyramids, which is punishable by up to three years in prison.

In February 2016, Egypt's antiquities ministry sent an official notice to the German embassy in Egypt informing them that a German citizen had been banned from visiting Egypt after he scaled a pyramid to shoot a collection of photographs and videos of the Giza Plateau.