5 minutes with... An ancient Egyptian statue of a bull | Christie's 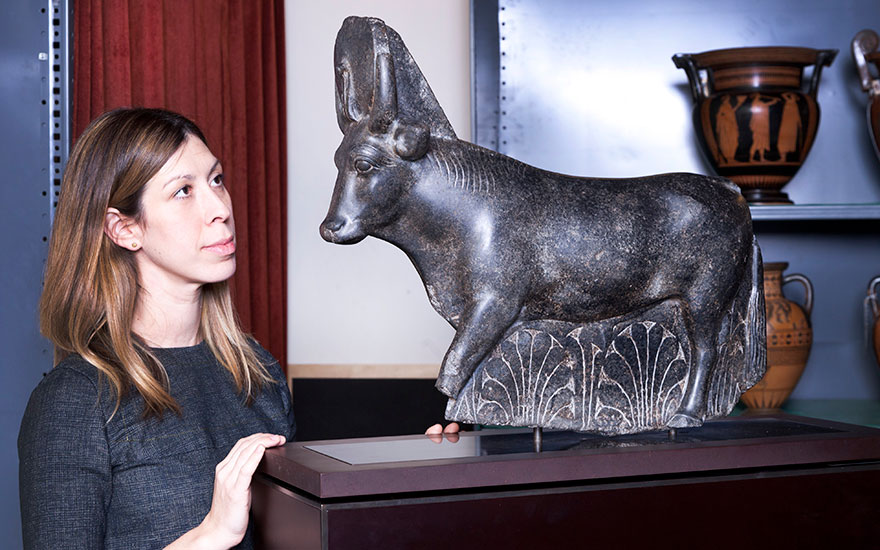 5 minutes with... An Egyptian sculpture of a sacred bull

Dating from Egypt's Late Period (664-332 BC), this granodiorite sacred bull is 'a gem of a piece', says Hannah Solomon, Christie's Specialist, Head of Sale for Antiquities. 'Wonderfully carved in delicate but powerful curves, he becomes the star of any room he inhabits.'

The Late Period saw native Egyptian kings return to the throne after more than a century of foreign rule. They were keen to fortify their cultural traditions in the face of foreign powers, and a new era of patronage saw naturalistic modelling of flesh and features on both human and animal sculptures pushed to unprecedented heights.

At the same time traditional Egyptian cults flourished. While ancient Egyptians did not worship animals, zoomorphic representations exemplified qualities and characteristics that were important in society. The male bull in particular was an attractive symbol, as it had a cosmic association and generally represented power and sexual potency, which is why the animal had strong ties to kingship and monarchial ideology.

Between the proud horns of this bull are two symbols of its divinity — a solar disc and a uraeus cobra. These attributes reveal its identity as a sacred bull, possibly Apis, but other bulls cults were also known. Apis was the sacred bull-god of the gods Ptah, Osiris and Atum, with his cult centre located at the Egyptian Late Period capital city of Memphis. Three other other closely-rated sacred bulls can be found in the Cleveland Museum of Art and The Fondation Gandur in Geneva.

An Egyptian granodiorite sacred bull. Late Period (664-332 BC). 23 in (58.4 cm) long. Estimate on request. This work is offered in Antiquities on 18 April at Christie's in New York

This sacred bull has been carved from a locally mined hard stone known as granodiorite. 'The luxuriousness of the stone, with its beautiful black, rich colour, makes a huge statement,' says Solomon. 'You want to run your hands over its surface.

'The bull symbolised power and sexual potency in ancient Egypt, making it the perfect icon for a deity,' continues the specialist. Only one living bull at a time would be worshipped, and for it to be designated an Apis bull it would need to have split hairs on its tail, a scarab shape under its tongue, a patch of fur representing a bird of prey in flight on its shoulders, a triangular mark on its forehead, a crescent moon on its flank, and a black and white coat.

Such a bull would be taken to live in the Apis sanctuary where it would be pampered as though it were a god, given a harem of cows and worshipped daily. It was said its breath cured diseases, and its movements were translated as prophecies.

'This bull has been published since the 1950s. It's rare, in great condition and comes with brilliant, long provenance'

'The sculpture has a real sense of personality,' explains Solomon. 'He also exhibits wonderful movement. The waves in the mane and the brushing of the legs in the papyrus leaves give the bull this forward motion.' Interestingly, the bull's stance is not anatomically accurate, which suggests the artist strove for an idealised beauty in the time-honoured Egyptian tradition.

'For us to find such a beautiful statue, however, is only half the job,' Solomon goes on to explain. 'The other half is discovering its recent history, because it is important for antiquities to have a rich ownership history outside of Egypt'. Fortunately this bull was published in 1959, as well as being rare and in great condition.

The market for antiquities is booming. 'People now more than ever understand the importance that ancient sculpture has played in forming the aesthetic of everyone from Giacometti to Basquiat,' Solomon explains. 'As a result, they are coming to us to find works that complement their 20th-century collections.'