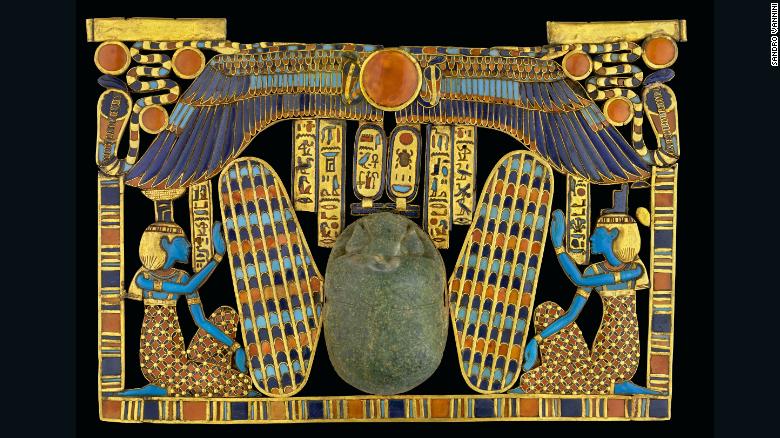 Photos:
King Tut – Sandro Vannini has been photographing the Valley of Kings in Egypt for over two decades. He used breakthroughs in technology to capture this ancient civilization in remarkable detail.

This image shows the decoration of a large funerary scarab made from green semiprecious stone.

Vannini's photographs are featured in a new book, ""King Tut: The Journey Through the Underworld," that has been published to celebrate the centenary of Carter's first excavation in the Valley of Kings.

(CNN) - Since its discovery by Howard Carter in 1922, the golden, mummified King Tutankhamun has been at the heart of the world's fascination with ancient Egypt.

While many explorers and archaeologists have sought to understand King Tut, photographer Sandro Vannini is the man who, for the past two decades, has captured the fine details of the pharaoh.

Vannini began photographing King Tut in the late 90s, when photographic technology was evolving. He uses a rewarding but arduous technique of multi-shot photography that reveals King Tut in his original color.
In celebration of his work, and to mark the centenary of Carter's first excavations of the Valley of Kings, publishers Taschen have published "King Tut: The Journey Through the Underworld."
The book documents Vannini's extraordinary portfolio of images. "(I use) very updated cutting-edge technologies in shooting," Vannini told CNN.
Precision is put into the images.
"Our picture of the Tutankhamun mask is the result of shooting 160 shots of the same image just changing the lighting.Then three weeks of post-production," Vannini said.
Photographing antiquities can be challenging. There are many colorful and complex jewels.
But Vannini's ambition remains steadfast: "To tell more the soul of the object than just the object itself."
Hide Caption
7 of 10

Photos:
King Tut – This boat is occupied by a shrine and a servant holding a lotus.
Hide Caption
9 of 10

Photos:
King Tut – The tomb of Ramesses: Kephri and Osiris sitting on their throne.
Hide Caption
10 of 10