Ugly Object of the Month – October 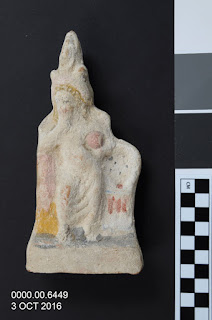 It's October, folks, and that means the season of decorative gourds and dressing up in festive costumes is upon us. This is partly why I chose this ceramic figurine of Harpocrates as October's ugly object.

Who, you might ask, is Harpocrates? He was a deity worshipped in Ptolemaic Egypt, a child version of the sun god Horus. This ceramic figurine bears many of Harpocrates' signature traits, such as a finger raised to his mouth, the double crown and crescent moon, and a garland. This figurine is also probably one of many identical ceramics produced for mass consumption.  But what's really cool, to me, is what's going on the surface: this Harpocrates is seriously decked out in a variety of well-preserved paint colors, which include black, pink, red, yellow and blue. Equally cool is the likelihood that other ceramics like this one, many of which retain no polychromy at all, were just as colorful.

While documenting the figurine I thought it might be worth doing some technical imaging of the pigments, to get a preliminary idea of what they could be. The longwave ultraviolet luminescence (UVL) image revealed that the pink garland is likely made of rose madder pigment, and the visible-induced infrared luminescence (VIL) image showed traces of Egyptian blue pigment on the structure next to Harpocrates, as well as on his crown. The remaining colors are likely iron-based earth pigments, and the black carbon-based. Other techniques that could help us confirm these results include XRF or FTIR spectroscopies, the first of which (like imaging) is non-invasive. 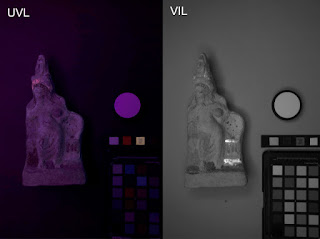 Left: UVL image showing orange autofluorescence of madder in the garland. Right: VIL image showing luminescent Egyptian blue stripes to the right of the figure, as well as in the crown

This highly colorful Harpocrates will be on display at the Kelsey starting February 10, 2017, as part of the upcoming special exhibition The Art of Science and Healing: From Antiquity to the Renaissance, curated by Pablo Alvarez.