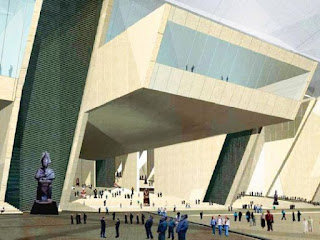 Japan has signed a deal to provide US$460 million in funding for the construction of Egypt's Grand Museum.

The agreement was signed on Monday by International Cooperation Minister Sahar Nasr and Japanese Ambassador to Egypt Takehiro Kagawa.

The museum, which is under construction, will be one of the most important museums in Egypt, housing more than 100,000 artifacts from all pharaonic periods.

A statement from the ministry said the funding will be allocated to resume construction of the museum.

The first phase of the museum is scheduled to be opened in 2017.

The museum will be one of the biggest museums in the world, Nasr said in the statement. It will contribute to the development of Egypt's tourism sector, providing an international museum for the 21st century that shows development of Egyptian civilization throughout the ages, she said.

The ministry, in collaboration with various relevant authorities and the Japanese partners, has been able to secure the funding needed to resume the project, she added.

The project aims to encourage tourism and provide new jobs in various sectors related to tourism, the statement added.

The museum is located close to the three pyramids in Giza.

The two documents were signed in the museum's yard. “We are keen on doing this to check on the project's progress on the ground,” the minister said.

In another statement, Antiquities Minister Khaled Anany said 50 percent of the museum construction has now been completed.