mid-day Exclusive: Mumbai's own mummy on display for the first time in history - News


mid-day Exclusive: Mumbai's own mummy on display for the first time in history

Donated by British explorers to the Chhatrapati Shivaji Maharaj Vastu Sangrahalaya in the early 20th century, an Egyptian mummy will make its debut this week. 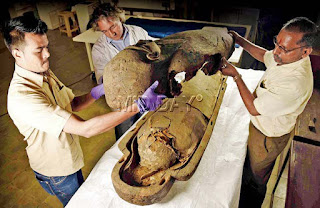 2,000 - That’s how old the mummy could be (in years) estimates CSMVS; British Museum experts date it to the Ptolemaic period (305 BCE and 30BCE)

×On October 27, Mumbai’s only mummy will go on display at the Chhatrapati Shivaji Maharaj Vastu Sangrahalaya as part of the upcoming exhibition, Mummy: An Unsolved Mystery — Conserving Mumbai’s Egyptian Treasures. Sabyasachi Mukherjee, director general and secretary, board of trustees, along with Anupam Sah, head of art conservation, research and training at the museum’s Art Conservation Centre, Bilwa Kulkarni, education officer, and Aparna Bhogal, curator, have been working round the clock to ensure that the biggest blockbuster on Mumbai’s cultural itinerary kicks off according to plan. The exhibition will continue till January 4, 2017. 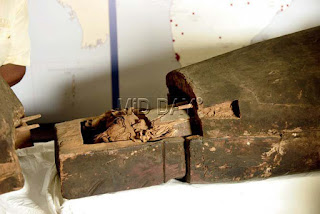 The lower end of the coffin, with a close view of what could possibly be the mummified feet of the body. Note a part of an open butterfly hinge to the rightPics/Pradeep Dhivar

When mid-day dropped by on Saturday at the Conservation Centre, where the mummy has been kept under observation before it heads to a new gallery at CSMVS, Sah and his team, along with Kulkarni were exchanging notes on the progress. The climate controlled room (to keep humidity under check), resembled a laboratory. Except, instead of test tubes and funnels, frescoes and howdahs were under study. The star attraction, the mummy, lay wrapped in layers of protective fabric. One by one, Sah’s team carefully removed each layer; as their gloved hands held on to this ancient chapter of history. On another table, a member from the textile gallery, had handwoven a rich blue coloured polyester cushioned cloth that would serve as the base for the coffin during the exhibition. 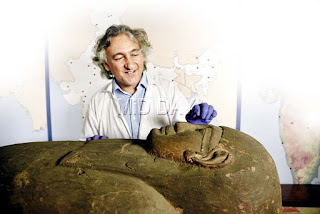 Anupam Sah points to the distinct make-up on the face of the wooden coffin, some of which is still intact. He also felt that the face on the coffin could be a man’s

The coffin, crafted from a single log of Egyptian cedar wood, is more or less intact, defying its over 2,000-year-old journey. Hinges meant to join the coffin line its periphery. Sah, along with two assistants raise the upper case of the coffin, to reveal the bandaged occupant inside. “It could be approximately between 2,000-2,400 years old,” adds Kulkarni. Our eyes do a quick scan, as Sah shares details. “It’s impressive to see an intact coffin. We’re unsure if it’s male or female, or if it’s face down or up. Notice the detailing of the eye make-up. It’s evident that it’s a man’s face on the coffin,” pointing to the still-intact etchings, and faint hue of blue near the eyes.

Behind the scenes
But, how did a mummy enter CSMVS’s scheme of things? Mukherjee reveals, “The mummy has been in the Museum collection from the early 20th century. During the early colonial period, expeditions by British explorers to Egypt, where mummies were collected as souvenirs, were quite widespread. Often, these were presented to various museums across the country by those heading back to Great Britain, taking a pitstop in Bombay.”

This mummy had been with the CSMVS collection for a long time and remained unseen in the Museum stores. “As we collaborated with the British Museum, London, on our first joint exhibition Mummy: the Inside Story (2013), we connected with experts on Egyptian antiquities from the British Museum. This, we realised, was our golden opportunity to explore possibilities for study and conservation of our mummy and other Egyptian antiquities that would then enable us to make the collection available to visitors,” informs Mukherjee. The exhibition curated by Bhogal, will include antiquities, like amulets, a scarab beetle and burial objects, including the Eye of Horus.

During the collaborative exhibition, CSMVS had invited Egyptian antiquities experts from the British Museum to examine the mummy. In 2015, the CSMVS approached the Organic Artefacts Conservation Section, Department of Conservation and Scientific Research of British Museum, London to undertake an assessment of a Coffin and mummy. Nicola Newman, Senior Conservator from the Organic Artefacts Conservation Section was deputed to visit Mumbai to study and assess the condition of the mummy from October 12 to 15. “The visit and study was meant to assess the coffin and the mummy,and propose treatment making it suitable for display,” Kulkarni chips in. Newman had assessed the mummy and recommended technical studies that would aid in discovering more about the condition and technology of this ancient Egyptian burial assemblage.

Road ahead
The exhibition is Phase 1, where CSMVS intends to create a buzz about their star exhibit. “We hope it will help with funding for research and structural studies about various aspects like fabrics, coffin, wood, pigments and other aspects to its all-round observation. “Post January 4 (after the exhibition), the non-invasive internal study will begin,” Sah adds, taking us through earlier exhibits that were restored using similar technology. This process will involve X-Ray and CAT scans.

Based on this data, a conservation strategy will be drawn up. A section of the exhibition will detail the studies conducted by Nicola and CSMVS conservators during her visit. “It was and will continue to be an organic process with both teams as we take this to the investigative stage. Good physics will come into play” he smiled.

For now, the mummy has been sealed, and returned to its original resting spot in a corner at the centre. The conservation-friendly LED lights have been switched off, and the shrouded treasure resembles a mystery once again.

CSMVS Museum Director Sabyasachi Mukherjee shares how this exhibition hopes to up the cultural ante for Mumbai... 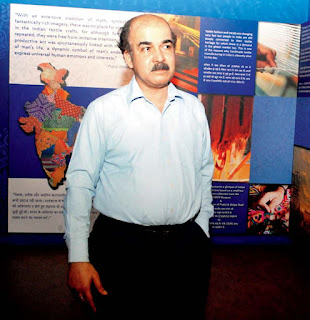 How have the teams at the British Museum and CSMVS collaborated on this project?
CSMVS and the British Museum have worked together for the initial assessment of the condition of the Mummy and the proposed treatment. This is only a beginning. The objective of the exhibition for now is to introduce the Mummy to the citizens of Mumbai to inform and enlighten them about our rarer treasures and the need for their preservation. Through this exhibition we hope to garner support for undertaking further study and restoration with the help of British museum experts. This will entail visits from their experts from the Organic Artefacts Conservation Section as well as our conservators visiting the British Museum for training and research.

What other activities will be held to support this long-running exhibition?
We intend to invite students to visit and observe the Mummy. The Mummy and the associated Egyptian artefacts serve to give a good idea about the beliefs and practices around the concept of Egyptian afterlife. We also intend to direct their attention to the ‘afterlife’ of the Mummy — in itself an important historical artefact – and the need for its conservation and preservation. Post the exhibition, we hope to raise enough funds to begin with the next steps of assessment and conservation treatment.

What does this collection mean for Mumbai?
Along with the Mummy, the museum has a few historically significant Egyptian antiquities in its collection. This collection is unique in nature and perhaps the only Egyptian collection in the city. World museums or museums of world culture are a concept mostly associated with the West. It is our endeavour to evolve as a ‘world cultures’ museum in the East. While we have been realising this motto through collaborative exhibitions with museums across the world, we now want to utilise our own small but significant collection of world artefacts to this effect.